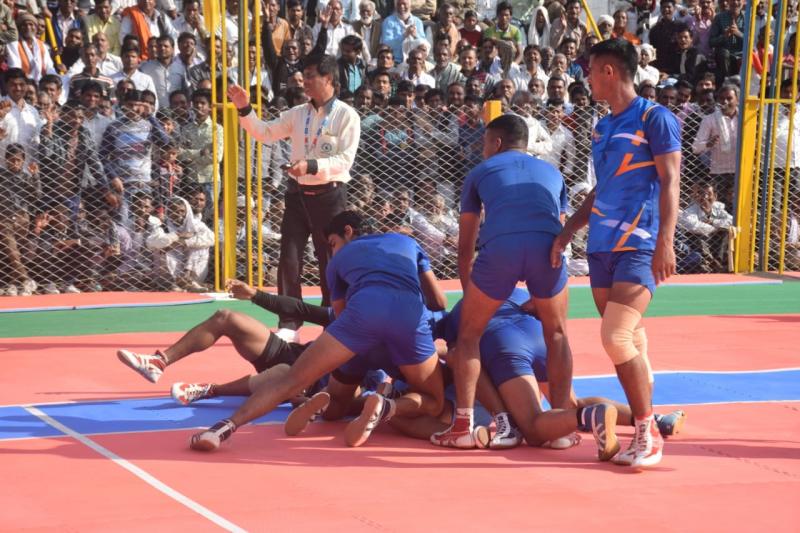 Kabaddi is back with its first tournament of 2021 after a 9-month break in pandemic affected 2020. Sahyog Kreeda Mandal, Madhya Pradesh, will conduct the 38th All India Men Kabaddi Championship (AIMKC) from 20th to 23rd January 2021. This prestigious tournament will take place in Gotegaon, a town 60km from Jabalpur. When : 20-23rd January 2021 Where : Gotegaon, Jabalpur Watch : Live on Kabaddi Adda Youtube Organizer : Sahyog Kreeda Mandal, Madhya PradeshThe history of the tournament dates back to 1982 when the first edition was played. AIMKC has been conducted on the same dates each year for the last 37 years. The Finals will be played on 23th January, the birth anniversary of Netaji Subhas Chandra Bose. 2021 marks the 125th birth Anniversary of Subhas Chandra Bose. To pay tribute, Sahiyog Krida Mandal will inaugurate a statue of Netaji Bose on the final day. The Chief Guest Shri Prahlad Singh Patel, Union Minister for Culture and Tourism, Govt. of India, will preside over the Gotegaon Kabaddi tournament. The winner will get a prize money of rupees 3 lakhs. Last year North Eastern Railways, Gorakhpur, walked away with the championship. AIMKC is known for its high quality of Kabaddi. Every team is required to have 3-4 players who have played in the Pro Kabaddi League. In 2020, there were 72 Pro Kabaddi players part of this tournament. An elite list of teams like Northern Railways, North Eastern Railways, ONGC, Red Army, Green Army, and Indian Navy can be seen in action during this tournament.Kabaddi Adda, 306 7th cross domlur layout, bangalore 560071 +919480546592We conduct and cover Kabaddi tournaments across the world. We do the scoring and live stream on matches on our channel.

01-19-2021 | Sports
WCFN Solutions
Play Daily Fantasy Games on India's Biggest FanFight Fantasy Sports Portal
Want to get the best experience while playing fantasy games? You can now install the FanFight app bringing in all exclusive options that help you to play games on your way. It takes a few minutes to install and you can thus start enjoying the games comprehending the techniques to win the match. FanFight also brings in chances to win cash prizes and thus you feel the inspiration to begin
06-16-2020 | Sports
WCFN Solutions
Playing FanFight Fantasy Basketball helps you to Robust your Knowledge on Basket …
The increasing popularity of fantasy sports may provoke you to explore this unique concept of online gaming, feeling enthusiastic to play your favorite sport, be it football, cricket, basketball or something else, become an active participant, apply your sporting knowledge and earn cash prizes by winning a particular match or an entire league. Start your Fantasy Journey : Are you going to play fantasy basketball for the first time? You can certainly
05-08-2020 | Sports
WCFN Solutions
Why fantasy cricket is a Leading Fantasy game than Football in India
In today's context it can be said that, India is the hub of cricket which is intensely welcomed as well as appreciated by the emotions of millions of Indian individuals. A huge number of Indians enjoy the game by watching and playing, making it easier for fantasy cricket to gain such overnight popularity. Though, football is also a rising sector in India, but the madness about cricket is simply undeniable. Indian
05-23-2019 | Sports
Skillanation
WIFA Skillanation in cooperation with Chikitsak Samuha’s Patkar-Varde College …
MUMBAI, May 21, 2019 –WIFA Skillanation and Patkar-Varde College, Best College of the University of Mumbai 2017, have introduced a new set of dual-certification Programs from this academic year onwards for students wishing to pursue: • 3 year Bachelors in Management Studies – Sports Management • 2 year Masters in Sports Management • 1 year Post Graduate Diploma in Sports Management. In these Programs, students will earn their Bachelors and Masters Degree from the University
02-26-2019 | Advertising, Media Consulting, …
Coherent Market Insights
Outdoor LED Display Market 2019-2026: Comprehensive Study Explores Huge Growth i …
The Global Outdoor LED Display market was valued at US$ 16.43 billion in 2016 and is expected to witness a CAGR of 17.1% from 2017 to 2025. Rising consumer requirement for energy-efficient lighting systems, technological innovation, HD resolution, good pixel quality, and brightness are some of the factors augmenting the outdoor LED display market growth. Ask For In-Depth Sample Copy @ https://www.coherentmarketinsights.com/insight/request-sample/956 Market Dynamics Growing demand for LED displays in outdoor advertisement and
04-11-2017 | Science & Education
BKBIET Pilani
Sparkling Performances Galore at BKBIET Pilani Rituraj of College Fests in Rajas …
Pilani hometown to Birlas has many educational institutions which include 2007 established BK Birla Institute of Engineering & Technology BKBIET which is presently one among the top ranking colleges under Rajasthan Technical University. It is indeed a matterof pride that BKBIET is a mini India with students coming from different parts of India echoing Gurudev Rabindranath Tagore’s National anthem line “Punjaba Sindhu Gujarata Maratha Dravida Utkala Banga”. Basant the 108
Comments about openPR
I can't but agree to the positive statements about your portal: easy to use, clear layout, very good search function, and quick editing!
Jens O'Brien, Borgmeier Media Communication