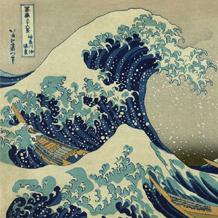 The Hollow of the Wave off Kanagawa

Chicago, IL -- The University of Chicago Department of Music concludes another glorious season on Saturday, May 26 at 8:00 pm and Sunday, May 27 at 3:00 pm in Mandel Hall, located at 1131 E. 57th Street in Hyde Park. This year the University Symphony Orchestra, University Chorus, Motet Choir, and Rockefeller Chapel Choir present Francis Poulenc’s celebrated Gloria, a grandiose setting of the Roman Catholic Gloria in excelsis Deo text, featuring soprano soloist Patrice Michaels. The University Symphony opens this annual Cathy Heifetz Memorial Concert program with Claude Debussy’s colorful and exuberant Fêtes (Festivals), followed by Augusta Read Thomas’ Of Paradise and Light. The USO continues its celebration of Debussy’s 150th birth anniversary with one of the premier symphonic masterpieces of the 20th century, La Mer – a fantastic, impressionistic vision of the Mediterranean Sea. Barbara Schubert and James Kallembach share the podium for this collaborative concert.“Like the Romantic ideal of art, Patrice Michaels’ voice is both natural and passionate,” says Classical CD Digest. “A formidable interpretative talent” (The New Yorker), Ms. Michaels receives raves for her “poise, musicianship and impressive fioratura” (Los Angeles Times), for “a voice that is light, rich and flexible” (Opera News), and her “pinpoint-accurate…bravura” (Boston Globe). She has performed on stage, in concert, and in recital since her debut in 1991, and has appeared with Lyric Opera of Chicago, Cleveland Opera, Central City, Tacoma Opera, The Banff Centre, and Chicago Opera Theater. She has been featured with the Shanghai, Czech National, St. Louis, Atlanta, Phoenix, and Minnesota Orchestras, the Maryland Handel Festival, Kansas City and Virginia Symphonies, as well as New York’s Concert Royal, Chicago’s Music of the Baroque, and the Maverick Festival.August Read Thomas was the Mead Composer-in-Residence for Pierre Boulez and Daniel Barenboim at the Chicago Symphony Orchestra from 1997 through 2006. In 2007, her Astral Canticle was one of the two finalists for the Pulitzer Prize in Music. The "Colors of Love" CD by Chanticleer, which features two of Thomas' compositions, won a Grammy award. In 2010, the renowned composer was appointed as University Professor of Composition in the Department of Music and the College at the University of Chicago. Of Paradise and Light is an orchestral transcription of Read Thomas' 2008 setting of e e cummings' poem, (kiss me), for girls' chorus. Thomas describes this new version as a work loosely in the tradition of Barber's Adagio for Strings: one which draws on the subtle and nuanced colors of the orchestra's string sections to create a soulful work of reflection, "as though a sliver of paradise and light came down to shine upon a garden of colorful flowers."Claude Debussy was born in St. Germain-en-Laye, France on August 22, 1862. From the age of ten on, he was a student, and somewhat of a rebel, at the Paris Conservatoire de Musique, where he won the highest prizes for composition – including the Prix de Rome for his cantata L'Enfant prodique. Among his major orchestral works are Fêtes and La mer, a symphonic masterpiece that shuns conventional theme and development much like the controversial composer himself. This concert’s poster artwork, The Hollow of the Wave off Kanagawa, the most celebrated print by Japanese artist Hokusai, was included as the cover piece of Debussy’s own printed score of La Mer at the composer’s insistence.The Cathy Heifetz Memorial Award was established to commemorate the life and honor the memory of Cathy Heifetz (1949-1976), who came to The University of Chicago in 1973 as a student in the Department of Music. The Memorial’s first endowment created an annual award to honor a student in the Department of Music whose associations as a member of this community have been singularly marked by a spirit of caring and helpfulness. The 2012 Cathy Heifetz Memorial Award will be presented at the May 27 concert.QUICK FACTS What: University Symphony Orchestra, University Chorus, Motet Choir, and Rockefeller Chapel Choir 2012 Annual Cathy Heifetz Memorial Concerts Barbara Schubert and James Kallembach, conductors Patrice Michaels, soloistProgram: Debussy’s Fêtes (Festivals) from Trois Nocturnes Thomas’ Of Paradise and Light Debussy’s La Mer Poulenc’s Gloria (with combined choruses)When: Saturday, May 26, 2012 at 8:00 PM Sunday, May 27, 2012 at 3:00 PMWhere: Mandel Hall 1131 E. 57th St., on the University of Chicago campus Admission: Free and open to the public Donations requested at the door: $10 / $5 students and childrenPhotographs and extended biographies are available upon request.Event Hotline: 773.702.8069 • music.uchicago.eduPersons who require assistance should call in advance: 773.702.8484.Positioned at the heart of a world-renowned academic institution, the Department of Music offers degrees in fields of musical scholarship and composition and sponsors a lively and diverse performance program that involves 15 student performance ensembles and programs in over 100+ concerts a year. Five ensembles-in-residence, the including Grammy-award winning eighth blackbird and Pacifica Quartet, and numerous professional concerts offered by University of Chicago Presents further enhance the vibrant musical life on campus.University of Chicago Department of Music 1010 E. 59th Street Goodspeed Hall Chicago, IL 60637 773.702.8484

04-14-2020 | Fashion, Lifestyle, Trends
Touchgate Global Productions
Ravish Zahid Thomas - Mrs. Pakistan World 2020
The new Mrs. Pakistan World 2020 has been announced with the 26 years old university student, Ravish Zahid-Thomas. Ravish, is currently enrolled in the university of Texas in the Human Resources program. She is also an American Pakistani influencer and is now juggling a new role in life as Mrs. Pakistan World 2020. When asked as to why she participated in the Mrs. Pakistan World beauty pageant, she said,
01-09-2019 | Media & Telecommunications
Muzit Inc.
Trace Thomas Joins Muzit Advisory Board
Co-founder of Masterlab, Skyview Systems to advise Big Data Company MUZIT For Immediate Release Orlando, FL (January 9, 2019): Muzit Inc. a big data company for the entertainment industry announced today that Trace Thomas has joined the Muzit Advisory Board. Thomas, co-founder of Masterlab and Skyview Systems, has been an Executive Advisor, Developer and Technology Evangelist for Sony, Apple, Sonic Solutions, Avid Technology, and assisted several great upstarts including CoSA After Effects (acquired
11-30-2017 | Politics, Law & Society
Thomas and Solomon
Thomas & Solomon - Safeguarding the Rights of "Whistleblowers"
Thomas & Solomon LLP regularly represents “whistleblowers” throughout the United States in qui tam lawsuits brought under the False Claims Act and other types of whistleblower laws. We represent employees who have uncovered fraud and employees who have been retaliated against as a result of reporting the wrongdoing. Many people are unaware that there are laws that reward whistleblowers for coming forward with information about fraud against the government. There
11-12-2012 | Advertising, Media Consulting, …
Advice Unlimited
Advice Unlimited Welcomes Thomas Moylan
OLNEY, MD – November 7, 2012 – Advice Unlimited LLC, a public relations/marketing communications firm that specializes in serving high tech companies and/or divisions that sell to the government marketplace, is pleased to announce that Thomas Moylan is joining its team as a Social Media Specialist. Thomas recently graduated from the University of Maryland, College Park, where he received his degree in Communication. His training, education, and professional experience gained through
10-14-2011 | Fashion, Lifestyle, Trends
The Jewel Hut
‘Coronation Street’ Goes Oriental with Thomas Sabo
‘Coronation Street’ star Samia Smith, who plays hairdresser ’Maria Connor’ in the soap, left Weatherfield to enjoy a night with Thomas Sabo. Popular brand Thomas Sabo jewellery was launching its new ‘Pop Asia’ collection at a shopping centre in Sheffield. Guests enjoyed oriental-themed entertainment including geisha girls, dance demonstrations, food and drinks. Smith was among many guests enjoying the hospitality, as well as the inevitable glamour of an event celebrating such a desirable
08-10-2011 | Leisure, Entertainment, Miscel …
DSN Music
ThomAs TroutmAn Releases "Pressure" in Europe
London -- American pop music sensation ThomAs TroutmAn, has released his new album "Pressure" in the EU via DSN Music. Troutman is a talented musician, writer, producer, dancer, actor, and director from Dayton, Ohio. “Pressure”, consists of seventeen original songs and interludes from ThomAs, each providing a combination of his high-energy pop tracks- most of which are produced by the young talented artist- melodious vocals and heartfelt lyrics. The rhythmic undercurrent
Comments about openPR
We publish our press releases on openPR.de because we like people who are "open" - just like us.
Frank Obels, CEO, INCONET - Informationssysteme, Communication und Netzwerkberatung GmbH