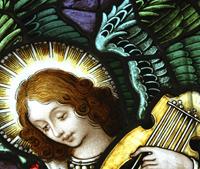 From the Rockefeller Memorial Chapel in Hyde Park, the University of Chicago Motet Choir, University Chorus, and Rockefeller Chapel Orchestra present Handel's holiday masterpiece performed with over 150 voices! Acclaimed choral master Dr. James Kallembach conducts the Messiah on Friday, December 2 at 8:00 PM. A tradition in Hyde Park since 1930, the 2011 performance will feature soloists Angela Mannino (soprano), Trevór Mitchell (tenor), Paul Corona (bass-baritone), and Ann Vikstrom (alto) to perform the beloved collection of compassionate arias and lively choruses in the magnificent setting of Rockefeller Memorial Chapel.Ms. Mannino made her Metropolitan Opera debut in May 2010 as the 15 Year Old Girl in Berg’s Lulu upon completing two years in Lyric Opera of Chicago’s Patrick G. and Shirley W. Ryan Opera Center. Acclaimed as having "simply the most uniquely beautiful and easily produced tenor instrument most people will ever hear,” Mr. Mitchell’s career has taken him across the U.S. as well as to Austria, Italy, Ukraine, the United Kingdom. Mr. Corona has performed in numerous operas with the Lyric Opera of Chicago and recently made his debut at the Metropolitan Opera in New York. Ms. Vikstrom, a Chicago native, holds degrees in music from Oberlin College and Northwestern University, and is a celebrated returning guest soloist.Handel’s Messiah is not only the most widely performed of Handel’s works, but is arguably one of the most popular compositions in the entire oratorio genre. Upon reading the scriptures from the Old and New Testaments compiled by literary scholar Charles Jennens, the composer was overcome by their power and composed the complete work in a mere 24 days, often feeling close to seeing the face of God in the music. In symphonic celebration, the Messiah recounts the life of Jesus from birth to crucifixion and finally resurrection, interweaving vocal and orchestral performance to create an uplifting, spiritual experience. The full orchestral textures and subtle choral nuances emphasize the theme of redemption and salvation, while the prominent role of the brass in the piece generates a sonic impact far beyond that of most other oratorios. Ticket sales begin on Monday, November 21st at 10 am and can be purchased by calling the ticket hotline at 773.702.9075. Please note: last year’s concert sold out. Reserve your tickets early!QUICK FACTS WHAT: Handel’s Messiah, performed by the University of Chicago Chorus, Motet Choir, Rockefeller Chapel Orchestra, and special guests WHEN: Friday, December 2, 2011 at 8 pm WHERE: Rockefeller Memorial Chapel University of Chicago Campus 5850 S. Woodlawn Avenue PROGRAM: George Frideric Handel’s Messiah ADMISSION: $35 Chancel // $25 Front Nave // $20 General // $10 Students *Please note that unclaimed Front Nave seating will open to general admission at 7:55pm. Ticket Hotline: 773.702.9075 Ticket sales begin Monday, November 21 Persons who may need assistance should call 773.702.8484 in advance of the event. Music.uchicago.eduPositioned at the heart of a world-renowned academic institution, the Department of Music offers degrees in fields of musical scholarship and composition and sponsors a lively and diverse performance program that involves 13 student performance ensembles in over 100+ concerts a year. Five ensembles-in-residence, the including Grammy-award winning eighth blackbird and Pacifica Quartet, and numerous professional concerts offered by University of Chicago Presents further enhance the vibrant musical life on campus.Rashida N. Black Director of Public Relations University of Chicago, Department of Music, GoH 403 1010 East 59th Street, Chicago IL 60637 T: 773.702.3427 | F: 773.753.0558 W: music.uchicago.edu/ B: lucian.uchicago.edu/blogs/performanceprogram/

You can edit or delete your press release Handel’s Messiah: Part of Hyde Park’s Culture here