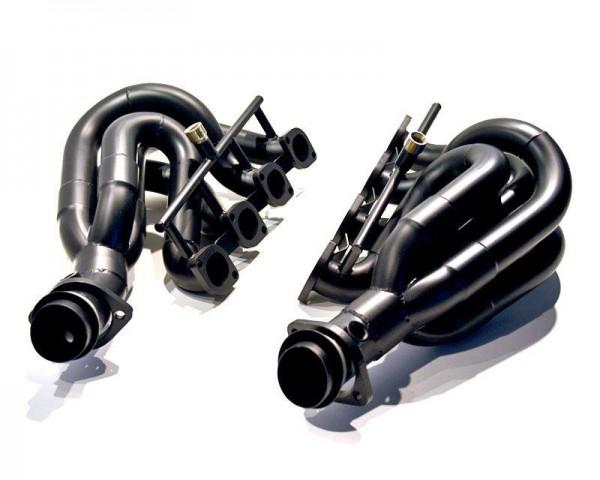 The newest Agency Power exhaust creations are the Ferrari 360 headers that fit the 99-05 vehicles. Made from 304 stainless steel, the headers come either unfinished or with one of two ceramic coatings. Flanges are laser cut for a precision fit. Each header features a highly engineered collector to add additional horsepower and torque. These headers will add almost 25 wheel horsepower and 25 ft/lbs of torque. In addition to improving performance, the headers also change the tone of the vehicle, adding a deeper sound. These 4 into 1 headers consist of 1.75" pipe that feed into a 2.375" collector giving a significant improvement over stock. These 100% handmade in the USA F360 headers will fit Ferrari 360 and Ferrari 360 Challenge.Agency Power Industries LLC has been bringing unique products and styling to the marketplace for tuner oriented vehicles since 2003. Agency Power was developed out of the need to provide quality, functional, and fashionable racing products. Based out of Gilbert, Arizona, Agency Power has established itself as one the core aftermarket companies for niche tuner products AP parts have been featured in magazines such as Modified, DSport, Import Tuner, Total 911, Bimmer, Super Street, and more.Betty Mermelstein bjmerm@vividracing.com Agency Power Industries, LLC Dan Mermelstein 1429 W. Scott Ave. Gilbert, AZ 85233 480 921-7422

09-11-2012 | Tourism, Cars, Traffic
Agency Power Industries LLC
Product Development from Agency Power Enhances the 2013 Porsche 991
Vivid Racing was able to get its hands on a 2013 Porsche 991 Carrera S to do product development with its sister company, Agency Power. The white color and beige interior are a nice combo with the 7 speed PDK transmission. Instantly noticed is the rear end with the sleeker looking taillights and the decklid. Looking at the decklid, there was only a small 30 by 8
06-20-2012 | Tourism, Cars, Traffic
Agency Power Industries LLC
Agency Power Equips Cole Seely’s Nissan 240sx
Supercross Lites rider, Cole Seely, has other things on his mind when he is not winning races for Honda and Troy Lee Designs… It’s burning rubber! While Cole is out for a serious injury he sustained at the Salt Lake City Supercross event, he has recovered enough to take out his SR20 equipped Nissan 240sx and drift up some fun with friends. As one of Vivid Racing’s Sponsored
06-11-2012 | Tourism, Cars, Traffic
Agency Power Industries LLC
Agency Power Helps Bucky Lasek, Skateboard Legend Turned Rally Driver, Outfit Hi …
We’re used to seeing Bucky Lasek on a skateboard. You probably played his character on Playstation 2 in Tony Hawks’ skateboard game series. If you ever caught an XGames or Dew Cup on ESPN or NBC, then you have seen him win more Gold Medals in Vert Skateboarding then any other rider. Having been a true car enthusiast with many built vehicles and track races under his
04-23-2012 | Tourism, Cars, Traffic
Agency Power Industries LLC
Lamborghini Shows Off Custom Wheels from Agency Power
This Lamborghini Gallardo was shoed with a special 5.2 spoke style wheel through Agency Power‘s custom wheel division. This set of wheels was done in a Titanium Brushed Finished to give the wheel a dark, almost deep, look to it. The front is a 20×8.5 and the rear is a 20×11, fitted to be nice and flush with the fender. The wheels are logo clean and