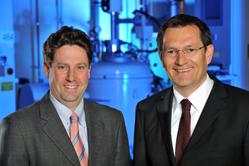 The Lindlar-based Schmidt + Clemens Group (S+C) today presented its results for the past financial year. The 2011 financial year was not an easy one for the Group, but succeeded in closing with a satisfactory result. In a very mixed market environment, sales turnover grew by 24% to €289 million (previous year: €233 million). Profits, however, fell short of expectations. With a figure of €124.4 million, the balance sheet total remained largely unchanged (previous year: €124.8 million). “A major contributor to the success of the business was once again the Spun Casting Division, which especially in the petrochemicals business is excellently placed,” reports Jan Schmidt-Krayer, Managing Partner of S+C. “Märker GmbH, which already ended the previous year on a successful note, was also able to reaffirm its upward trend in 2011.” “Following two weaker years, the revenues saw a recovery,” states Dr. Henning Kreisel, Managing Director of the Group. “While we managed to increase sales of the Group by 24 percent, the margins failed to match our expectations. With the start of the current year, however, this situation has also changed. Especially in Spun Castings, business in the first quarter was running at full power, and the results, too, are on a reasonable level“. Jan Schmidt-Krayer is also looking with optimism into the future: “Our capacity utilisation is currently very good, and the current level of inquiries is highly promising.”The very mixed and, in some cases, unpredictable economic developments of the year 2011 endorse the strategy adopted by the Schmidt + Clemens Group. “Rather than working as classical producers and processors of stainless steel, all our companies are growing into problem solvers with a high level of engineering and service skills and know-how,” Mr. Schmidt-Krayer points out. “This course is also optimally supported by our R&D Division which, through the development of new, innovative materials, is helping us to optimise our existing applications and move into new market segments.“ Thus, Schmidt + Clemens will be presenting not just one but two new materials at international trade shows that are scheduled in the near future: IFAT Entsorga in Munich and the ACHEMA in Frankfurt.“At the start of 2012, we placed our existing mission statement under the spotlight and took a critical look at what we have achieved and where we still need to improve,” Jan Schmidt-Krayer additionally reports. “The results have been incorporated into our new mission statement. A special focus in future will be on the human resources segment.”Schmidt + Clemens is a leading producer of stainless steel components. The key sales areas of the Group are petrochemicals, separation technology, energy engineering, the pumps industry, and the extrusion and rolling sectors.The Schmidt + Clemens Group employs over 1000 people worldwide (including around 600 in Germany), and in addition to its headquarters in Germany, has production facilities in Brazil, Spain, Great Britain, the Czech Republic, Malaysia and the Kingdom of Saudi-Arabia. The Group also operates a service centre for extrusion products in China. As well as vertical and horizontal spun castings, the Group also produces moulded castings. It also makes forgings for the extrusion industry and the plant and mechanical engineering sector. Rolls for a wide range of applications are produced by the Group’s British subsidiary, S+C Bowers & Jones Ltd.Schmidt + Clemens GmbH + Co. KG Lars Niemczewski, Press Spokesman Kaiserau 2 51789 Lindlar, Germany Email: presse(at)schmidt-clemens.de www.schmidt-clemens.com

11-13-2017 | Industry, Real Estate & Constr …
business news
Global LF Refined Steel market 2017 - HBIS Group, NSSMC Group, POSCO, Shagang Gr …
Apex Market Reports, recently published a detailed market research study focused on the "LF Refined Steel Market" across the global, regional and country level. The report provides 360° analysis of "LF Refined Steel Market" from view of manufacturers, regions, product types and end industries. The research report analyses and provides the historical data along with current performance of the global LF Refined Steel industry, and estimates the future trend of
08-28-2017 | Politics, Law & Society
Crowson Law Group
Crowson Law Group
It is commonly said that there is no such thing as minor surgery. Whether it’s getting an appendix removed or having a hip replacement, all surgical procedures are serious; more so if an error occurs during such a surgery. However, is any surgical error considered to be medical malpractice? This article will determine when a surgical error can be said to have reached the level of medical malpractice. It must
06-26-2017 | Health & Medicine
Skye Dental Group
Skye Dental Group
The Skye Dental Group has some of Glasgow’s most established, hygienic and professional practices under its umbrella. This includes The Glasgow Dentist, based in the Rutherglen area of Glasgow. The practice offers a range of private dental treatments such as teeth straightening systems, Damon Braces, Invisalign and Six Month Smiles, as well as dental implants for missing teeth and general dentistry and hygienist services. Damon Braces Damon Braces are a fixed brace teeth
12-08-2016 | Business, Economy, Finances, B …
Sharp World Group
Sharp World Group
Pour développer la fabrication il faut perfectionner son fonctionnement et intégrer de nouvelles méthodes modernes. A mesure que de nouvelles technologies apparaissent les entreprises сherchent à modifier l’équipement pour améliorer la qualité du produit. De tels changements influencent la fidélisation des clients ce qui assure les bénéfices et le profit de l’entreprise. Sharp World Group est une des sociétés leaders de production des systèmes de refroidissement et de congélation. Avec son
08-19-2011 | Health & Medicine
Dr. Batra's Care
Dr. Batra's Group Profile
Dr. Batra's – the name that represents excellence and commitment to the health services sector – the pioneering force that aims at building values for patients, employees, partners and for the society, at large. The fundamental business strategy of Dr. Batra’s is to innovate, to excel at whatever is created and to build a brand that constantly strives for something still better! Transparency in business and abiding by their fundamental principles
04-04-2011 | Business, Economy, Finances, B …
DeltaQuest Group
DeltaQuest Group Launches MySecondPassport.com
My Second Passport.com predominantly aims to assist and support individuals and their families with attaining citizenship abroad and obtaining work visas where required. The site extends to provide individuals with country specific citizenship laws and immigration options including economic citizenship programs. The main services offered by DeltaQuest Group via http://www.mysecondpassport.com website portal include; country specific citizenship laws, permanent and temporary residency and work visas, information on required documentation
Comments about openPR
Your portal is fast, simple, and easy to use. Others may have more functions but they also demand more editing time, you have to preformat the text in order to achieve a good result etc. I think openPR is really fantastic!
Andreas Knepper, wallmedien AG