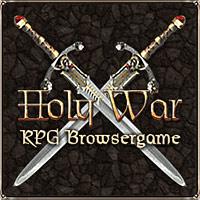 The developers and operators of the internationally acclaimed Medieval web game Holy War, GameArt Studio, have today launched their Spring Fan Art Contest in which players are given the chance to walk away with some fantastic prizes:Alongside Premium tickets, winning entries will also be rewarded with gold, the standard currency in the Medieval world of Holy War. All Holy War players can take part, and are called upon to get their creative juices flowing and contribute to the official GameArt Studio competition thread with any kind of fan art imaginable. If you haven't signed up to the forum already, you should do so right away since it couldn't be easier and it's completely free. Then, all there is left to do is take up your pen, your PC or your video camera! Any kind of fan art is permitted, from drawings, to Photoshop creations, photographed sculptures or even videos.  The contest opens today and finishes on 02.06.2012 at 01:00am server time. The winners will be decided the following week by a jury made up of Support team members here at GameArt Studio.The Holy War team wishes you all lots of fun and the best of luck!GameArt Studio GmbH was founded in 2006 in Berlin and rapidly grew to become one of the most innovative developers and producers of so-called web games. Web games are computer games through which real players can play with and against each other over the internet. They can be played for free on any internet browser, with no software installation or downloads required. With their four games „Holy War“, „Tagoria“, „A.I. War“ und „Glory Wars“, GameArt Studio already entertain over 5 million players worldwide.GameArt Studio GmbH Bismarckstraße 107 10625 Berlin, Germany E-Mail: press_en@gameartstudio.de Internet: www.gameartstudio.de