Witchcraft is in Full Communion with Rome 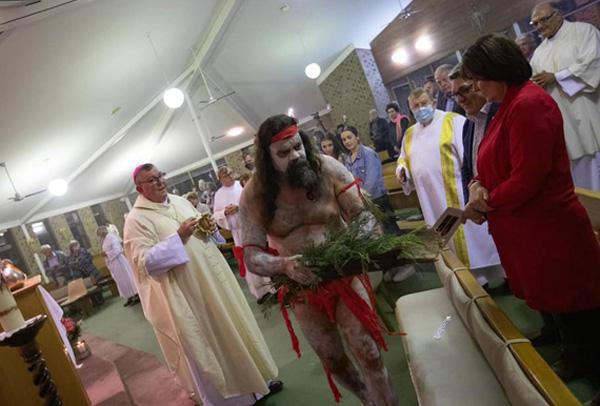 The Pope’s document on Human Fraternity signed at Abu Dhabi is on full display. What was once condemned as idolatrous and sacrilegious is now part of God’s will, according to the document on Human Fraternity, co-signed by Pope Francis, which says that “pluralism and the diversity of religions … are willed by God in His wisdom.” [1]On August 28, 2020, Roman Catholic Bishop Brian Gregory Mascord of Wollongong, Australia, [2] invited a descendant of the Budawang Aboriginal people of the Yuin Nation to sing, dance and invoke the spirits of nature during an ordination ceremony at the St. Mary Star of the Sea Catholic Church in Milton, Australia. [3]Aboriginal worship was offered to the different deities while praying for “the protection of the air, the land and the ocean,” followed by the call to “the spirits to take care of everything and keep us safe.” [3] This is blasphemy and apostasy. These modern churches are taking people to a whole new level of heresy.The native Aboriginal then joined the Roman Catholic Bishop in purifying the assembly. While the bishop sprinkled the church members with “holy water,” the native Aboriginal followed him with offerings of herbs to supposedly drive away evil spirits. Roman Catholicism and witchcraft were working together, hand in hand, in full communion.Welcome to the new all-inclusive ecumenical movement. Participation in idolatry is permitted by the “Document on Human Fraternity,” signed by Pope Francis. The Pope’s own participation in idolatrous ceremonies during the Amazon Synod [4] and Querida Amazonia [5] are an indication that he meant that the pagan worship of idols and the invocation of demonic spirits are part of the will of God for humanity.The truth is that worshiping anyone or anything other than the God of the Bible is a violation of the First and Second Commandments (Exodus 20:3, 4). Any participation in the worship of idols or in any other god is condemned. It is a serious sin, subject to judgment. The apostle Paul made it clear that these prayers and offerings are not offered to God but to demons:“What say I then? that the idol is any thing, or that which is offered in sacrifice to idols is any thing? But I say, that the things which the Gentiles sacrifice, they sacrifice to devils, and not to God: and I would not that ye should have fellowship with devils. Ye cannot drink the cup of the Lord, and the cup of devils: ye cannot be partakers of the Lord’s table, and of the table of devils. Do we provoke the Lord to jealousy? are we stronger than he?” 1 Corinthians 10:19-22.Where were the Protestants? What happened to the protests? And who spoke against this abomination? There was no one. Unfortunately, Protestant churches, including Seventh-day Adventists, are also too busy engaging in similar abominable acts with witchcraft. [6]Has this generation become so blind that it cannot distinguish the holy from the profane? Can’t we make a distinction between God and satanic idols? And how can Protestant churches, including many of our people, participate in a “fraternal” communion with the Devil in the modern ecumenical movement?There is a universal push for unity among the religious faiths. Unfortunately, many Christians are ignoring God’s word when it comes to paganism and idolatry. This is nothing more than an abandonment of the Bible in an attempt to appease the world. The church would rather ignore and offend God than to receive bad publicity.Rome’s modern ecumenical movement is a great scandal to Christianity. It causes deep pain to see today’s churches engaging in similar offenses that brought judgment on the nation of Israel:“For they provoked him to anger with their high places, and moved him to jealousy with their graven images.” Isaiah 78:58.“When God heard this, he was wroth, and greatly abhorred Israel.” Isaiah 78:59.“And delivered his strength into captivity, and his glory into the enemy’s hand.” Isaiah 78:61.Will this generation also risk condemnation and judgment by violating God’s holy commandments? Silence is acceptance and inaction is complicity. We invite God’s punishment for violating His clear teaching on idolatry and false worship. This generation of politically correct “Christians” has an arrogant and rebellious attitude towards standing up for purity, decency and righteousness. How can we imagine and think that we have the audacity to ignore God’s law and offer pagan worship to our Creator?“Satan determines to unite them in one body, and thus strengthen his cause by sweeping all into the ranks of Spiritualism … Papists, Protestants, and worldlings will alike accept the form of godliness without the power, and they will see in this union a grand movement for the conversion of the world, and the ushering in of the long-expected millennium.” (Great Controversy, pp. 588, 589).Sources[1] http://www.vatican.va/content/francesco/en/travels/2019/outside/documents/papa-francesco_20190204_documento-fratellanza-umana.html [paragraph 27][2] https://www.dow.org.au/about-us/brian-gregory-mascord/[3] https://youtu.be/db4Wpzk_psw[4] http://adventmessenger.org/pagan-worship-marked-the-opening-ceremony-for-pope-francis-meeting-with-his-amazon-bishops/[5] http://adventmessenger.org/pope-francis-pantheistic-exhortation-jesus-is-in-the-river-the-trees-the-fish-and-the-wind/[6] http://adventmessenger.org/adventists-witches-pagans-catholics-and-protestants-engage-in-interreligious-unity-and-solidarity/Contact: Andy Roman, Publisher Address: Advent Messenger, PO Box 96, Dover, OK 73734 Phone: (888) 299-2119 Website: www.adventmessenger.org Email: adventmessengers@gmail.comAbout: Advent Messenger provides news and commentary on current events, top stories, social trends and political and religious events. For more news visit www.adventmessenger.org

09-11-2017 | Politics, Law & Society
Advent Messenger
Trump’s National Day of Prayer: Is God Listening?
President Donald Trump issued a proclamation this past Sunday to be the National Day of Prayer for Hurricane Harvey victims. He called upon all Americans and all houses of worship to unite in prayer to God for the nation and to assist those suffering from the consequences of the storm. Even though this is a welcome step in the right direction that we acknowledge God and the significance of prayer, it
09-13-2016 | Associations & Organizations
A Work of Hope
EVANGELIST PASTOR JOHN COLLINS WALKS FOR GOD BECAUSE "GOD MATTERS"
Wheatland, Wyoming: Evangelist Pastor John Collins, head pastor of Love That Cross Ministries, is recognized as one of the 15 most influential pastors living in the United States today by Inspirational Faith Magazine. His faith is unwavering and inspirational. His preaching is spiritual and moving. His style is vibrant and animated. He is a fresh and honest example for evangelism, revival, and renewal that is sweeping the
03-01-2013 | Arts & Culture
Jerry Pollock PhD
God And Science: Jerry Pollock PhD Explains Why Science Is, In Fact, The Search …
In Jerry Pollock’s view, God is the Master Scientist. However God operates on a different level of science because He has limitless powers that human scientists do not, indeed cannot understand. God is the unified theory of the universe that Einstein so desperately sought to find, even on his deathbed. “With God,” Pollock stated, “we are not just dealing with another human being. His powers and His intelligence are trillions of
01-24-2013 | Arts & Culture
Jerry Pollock PhD
God and Science: Author Jerry Pollock, PhD Proposes Science Does Not Does Exclud …
In a recent symposium in New York City, scientists who both believed and disbelieved in God discussed the problematic issue of science and religion. Opponents of a Supreme Being involved in creating our universe framed their arguments around their beliefs that centuries of scientifically proven biological experiments and theoretical physics and mathematics exclude God’s participation, while proponents took the opposite view where they felt that science cannot answer all the
08-04-2008 | Arts & Culture
Mukul Goel
New Book Explains How Devotional Hindus Connect to God
Mukul Shri Goel, PhD, published by iUniverse, Inc., the leading provider of publishing technology solutions for authors, has announced the release of Devotional Hinduism: Creating Impressions for God. From the first moment we utter a name of God with a wish to reach him, we trigger our spiritual evolution. As we eventually reach the peak of spirituality, we no longer desire liberation but aspire to love God forever. How does this
09-03-2007 | Health & Medicine
Noble Foundation
Man is God but lacks self-realisation: 'You Are God' book by Shashi Verma
A recently released book by Shashi Verma, You Are God – The Bhagavad Gita as never before, provides the answer to man’s eternal quest, “Who am I?” and “Who is God?” It clearly says that man is himself God but does not have the self realization that he is God. The author explains that man can free himself from ageing and death and attain everlasting life in the same physical
Comments about openPR
OpenPR is clearly structured and remains true to its principle of confining itself to the essential parts. OpenPR has proven to be a very good and reliable partner to our media agency: Within the shortest time the releases are online and go down well with the media representatives. The success of OpenPR is reflected in the steadily increasing number of press releases. It is good that OpenPR exists!
Ursula Koslik, Director Marketing & PR, F+W Hamburg