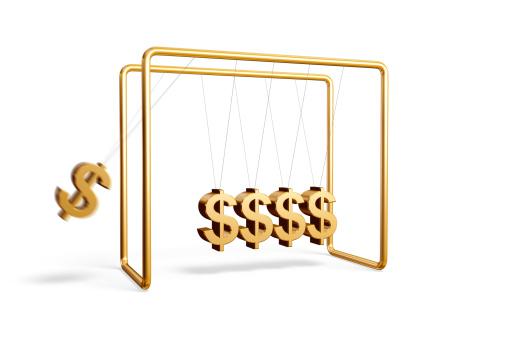 This earnings season, Mitchell Clark, contributor to Profit Confidential, believes the results will signal a top to the stock market. Clark believes this earnings season is going to be the catalyst for the stock market’s near-term direction, which is most likely down.“In my view, the stock market is likely to top out this year,” suggest Clark “So I’m not a big advocate of taking on major new positions.” In the recent Profit Confidential article, It’s All About the Momentum—as Soon as It Slows, the Stock Market’s Done, Clark highlights that the recent trading action is more about a lack of buyers than outright selling. “The key will be all about expectations. Since the fourth quarter of 2011, current expectations this earnings season are quite lofty,” suggest Clark. Clark believes that the U.S. economy is coming due for another slowdown or recession and that there isn’t enough momentum currently for the U.S. economy to accelerate going into 2013. “This earnings season, I’d be happy with no surprises,” suggest Clark. “The stock market doesn’t need corporate earnings to be surprisingly strong; only to show that there’s momentum in the numbers.” Clark cautions that, with the BRIC countries slowing, it’s going to be equally difficult for corporate earnings to accelerate. “U.S. firms have padded their earnings over the last several years from strong international operations, particularly in Asia. This is changing now and so must investor expectations,” suggest the analyst. Clark believes that, as soon as we get an earnings season that slowing momentum, this market is done. Profit Confidential, which has been published for over a decade now, has been widely recognized as predicting five major economic events over the past 10 years. In 2002, Profit Confidential started advising its readers to buy gold-related investments when gold traded under $300 an ounce. In 2006, it “begged” its readers to get out of the housing market...before it plunged. Profit Confidential was among the first (back in late 2006) to predict that the U.S. economy would be in a recession by late 2007. The daily e-letter correctly predicted the crash in the stock market of 2008 and early 2009. And Profit Confidential turned bullish on stocks in March of 2009 and rode the bear market rally from a Dow Jones Industrial Average of 6,440 on March 9, 2009, to 12,876 on May 2, 2011, a gain of 99%.To see the full article and to learn more about Profit Confidential, visit www.profitconfidential.com.Profit Confidential is Lombardi Publishing Corporation’s free daily investment e-letter. Written by financial gurus with over 100 years of combined investing experience, Profit Confidential analyzes and comments on the actions of the stock market, precious metals, interest rates, real estate, and the economy. Lombardi Publishing Corporation, founded in 1986, now with over one million customers in 141 countries, is one of the largest consumer information publishers in the world. For more on Lombardi, and to get the popular Profit Confidential e-letter sent to you daily, visit www.profitconfidential.com.Michael Lombardi, MBA, the lead Profit Confidential editorial contributor, has just released his most recent update of Critical Warning Number Six, a breakthrough video with Lombardi’s current predictions for the U.S. economy, stock market, U.S. dollar, euro, interest rates and inflation. To see the video, visit http://www.profitconfidential.com/critical-warning-number-six.Profit Confidential is Lombardi Publishing Corporation’s free daily investment e-letter.Profit Confidential 350 5th Avenue, 59th Floor New York, NY 10118

You can edit or delete your press release Stock Market to Top Out, Financial Report by Leading Financial Newsletter Profit Confidential here

02-21-2019 | Business, Economy, Finances, B …
eonmarketresearch
Global Urinary Incontinence Products Market 2019 - Kimberly-Clark, SCA, Unicharm
This new report by Eon Market Research, titled “Global Urinary Incontinence Products Market 2019 Research Report, 2015 – 2025” offers a comprehensive analysis of Urinary Incontinence Products industry at a global as well as regional and country level. Key facts analyzed in this report include the Urinary Incontinence Products market size by players, regions, product types and end industries, history data 2014-2018 and forecast data 2019-2025. This report primarily focuses
01-21-2019 | Business, Economy, Finances, B …
Apex Market Reports
Global Air-laid Nonwovens Market 2019 - ANDRITZ, Freudenberg, Kimberly-Clark
Air laid nonwoven fabrics are manufactured without using water.Separately loosened fibers and fine particles are uniformly dispersed in an airstream and laid on a metal mesh for bonding. Get Free Sample Copy of Report Here: http://bit.ly/2U3NIXL Scope of the Report: The raw materials and manufacturing methods used for nonwoven fabrics are many and various. Manufacturing methods consist of the wet-type and the dry-type, the latter being further divided into the adhesive type, the
10-27-2017 | Fashion, Lifestyle, Trends
QYresearchreports
Global Baby Diapers Market 2017 - Procter & Gamble, Kimberly Clark, Unicharm
Qyresearchreports include new market research report "Global Baby Diapers Market Professional Survey Report 2017" to its huge collection of research reports. The business landscape of the global Baby Diapers market is undergoing dynamic changes. In order to facilitate a complete understanding of the complex industry scenario for clients and thus enhance their decision making process, the study on the global Baby Diapers market presents a methodological explanation of this dynamic market
03-02-2017 | Advertising, Media Consulting, …
GlobeMetrix
Global Medical Nonwovens Market 2017 - Kimberly-Clark, Ahlstrom
The report entitled Global Medical Nonwovens Market 2017 presents key insights into the global Medical Nonwovens market along with the latest up-to-date industry details and forthcoming Medical Nonwovens industry trends, which will assist the readers to focus on product specification and end users driving the overall market revenue and profitability. Report Keynotes The main motive of the report on "Global Medical Nonwovens Market 2017" is to study comprehensive details of the market
04-29-2016 | Industry, Real Estate & Constr …
Lee Spring Ltd
Lee Spring acquires Clark Spring & Manufacturing
Lee Spring, a global leader in stock and custom springs, recently announced that it has purchased the assets of Clark Spring located in Hayward, California. Steve Kempf, CEO of Lee Spring, commented that “President of Clark Spring, Eric Eckberg, has built a strong company over the last thirty years based on ongoing engineering support, excellent quality control and attentive customer service. This fits our culture perfectly and adds significantly to
11-12-2012 | Science & Education
3 Birds Marketing
Scott Clark Toyota Sends A Tundra Into Space
Charlotte-Based Toyota Dealership Makes Historic Voyage, Sends Toy Tundra Up In Weather Balloon, Capturing Entire Journey On Film Video at: http://www.youtu.be/mJGcnMApXt4 October 25, 2012, [Matthews, NC ]…………Scott Clark Toyota endeavored to build and launch the first Toyota Tundra into space, succeeding on October 11, 2012 as they sent a toy Tundra to 90,000 feet over Charlotte, NC. Feeding off of the energy created by Toyota USA in preparing a stock
Comments about openPR
OpenPR is clearly structured and remains true to its principle of confining itself to the essential parts. OpenPR has proven to be a very good and reliable partner to our media agency: Within the shortest time the releases are online and go down well with the media representatives. The success of OpenPR is reflected in the steadily increasing number of press releases. It is good that OpenPR exists!
Ursula Koslik, Director Marketing & PR, F+W Hamburg