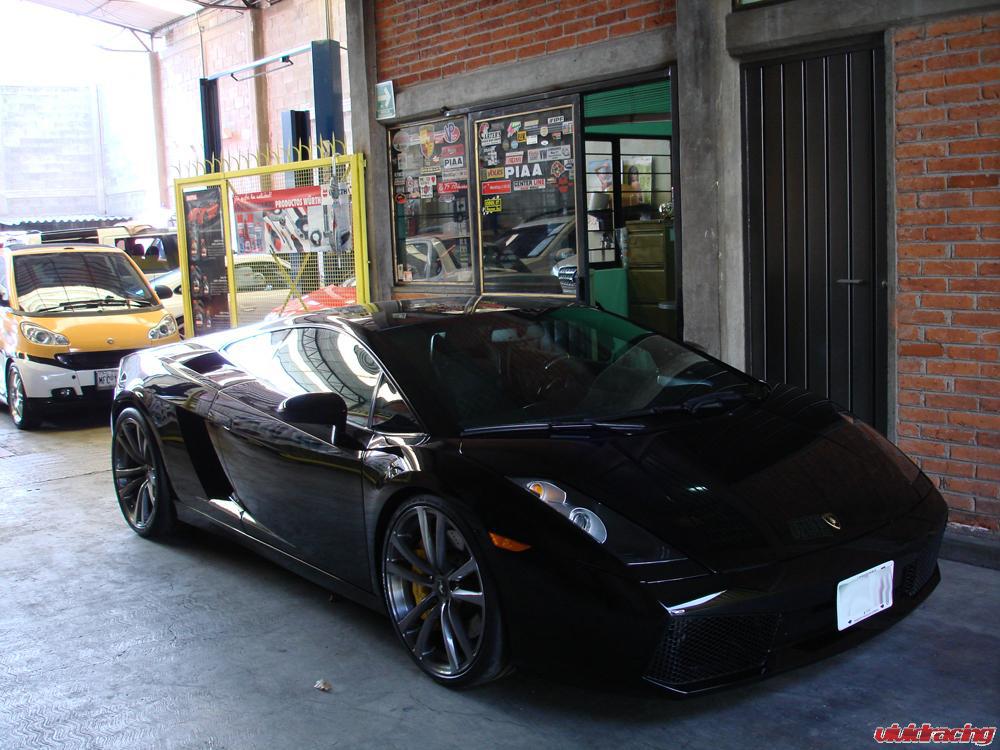 This Lamborghini Gallardo was shoed with a special 5.2 spoke style wheel through Agency Power‘s custom wheel division. This set of wheels was done in a Titanium Brushed Finished to give the wheel a dark, almost deep, look to it. The front is a 20×8.5 and the rear is a 20×11, fitted to be nice and flush with the fender. The wheels are logo clean and have been drilled for the OEM center caps. Michelin Pilot Sport N Spec tires have been fitted for those high speed runs. A 245/30/20 is in front with a 315/25/20 tire in the rear. In addition to the new shoes, this Lambo was also equipped with some power parts. Fabspeed cat bypass pipes were added to give it more juice and raise the sound up a bit. A Fabspeed carbon fiber airbox was also added with the addition of BMC air filters. This intake gives the V8 better throttle response and a nicely tuned engine sound.Agency Power Industries LLC has been bringing unique products and styling to the marketplace for tuner oriented vehicles since 2003. Agency Power was developed out of the need to provide quality, functional, and fashionable racing products. Based out of Gilbert, Arizona, Agency Power has established itself as one the core aftermarket companies for niche tuner products AP parts have been featured in magazines such as Modified, DSport, Import Tuner, Total 911, Bimmer, Super Street, and more.Betty Mermelstein bjmerm@vividracing.com Dan Mermelstein Agency Power 1429 W. Scott Ave. Gilbert, AZ 85233 480 921-7422

09-11-2012 | Tourism, Cars, Traffic
Agency Power Industries LLC
Product Development from Agency Power Enhances the 2013 Porsche 991
Vivid Racing was able to get its hands on a 2013 Porsche 991 Carrera S to do product development with its sister company, Agency Power. The white color and beige interior are a nice combo with the 7 speed PDK transmission. Instantly noticed is the rear end with the sleeker looking taillights and the decklid. Looking at the decklid, there was only a small 30 by 8
06-20-2012 | Tourism, Cars, Traffic
Agency Power Industries LLC
Agency Power Equips Cole Seely’s Nissan 240sx
Supercross Lites rider, Cole Seely, has other things on his mind when he is not winning races for Honda and Troy Lee Designs… It’s burning rubber! While Cole is out for a serious injury he sustained at the Salt Lake City Supercross event, he has recovered enough to take out his SR20 equipped Nissan 240sx and drift up some fun with friends. As one of Vivid Racing’s Sponsored
06-11-2012 | Tourism, Cars, Traffic
Agency Power Industries LLC
Agency Power Helps Bucky Lasek, Skateboard Legend Turned Rally Driver, Outfit Hi …
We’re used to seeing Bucky Lasek on a skateboard. You probably played his character on Playstation 2 in Tony Hawks’ skateboard game series. If you ever caught an XGames or Dew Cup on ESPN or NBC, then you have seen him win more Gold Medals in Vert Skateboarding then any other rider. Having been a true car enthusiast with many built vehicles and track races under his
05-10-2012 | Tourism, Cars, Traffic
Agency Power Industries LLC
Agency Power Headers for Ferrari 360 99-05
The newest Agency Power exhaust creations are the Ferrari 360 headers that fit the 99-05 vehicles. Made from 304 stainless steel, the headers come either unfinished or with one of two ceramic coatings. Flanges are laser cut for a precision fit. Each header features a highly engineered collector to add additional horsepower and torque. These headers will add almost 25 wheel horsepower and 25 ft/lbs of torque. In addition to improving

04-18-2019 | IT, New Media & Software
Market Density
Global Sport Watches Market Insights, Forecast
This report presents the worldwide Sport Watches market size (value, production and consumption), splits the breakdown (data status 2013-2018 and forecast to 2025), by manufacturers, region, type and application. This study also analyzes the market status, market share, growth rate, future trends, market drivers, opportunities and challenges, risks and entry barriers, sales channels, distributors and Porter's Five Forces Analysis. The Sport Watches market was valued at Million US$ in 2017
03-01-2019 | Sports
Orbis Research
Sport Sunglasses Market 2019-2024 By
Global Sport Sunglasses Market 2019-2024: The study on Global Sport Sunglasses Market, offers deep insights about the Sport Sunglasses Market covering all the crucial aspects of the Market. Some of the important aspects analyzed in the report includes Market share, production, key regions, revenue rate as well as key players. This Sport Sunglasses report also provides the readers with detailed figures at which the Sport Sunglasses Market was valued in the
11-12-2018 | Sports
VisionDirect
5 Sunglasses For Sport Enthusiasts
12/11/2018, Sydney - This is the season to be sportive! That's right, it's officially summer, down under, and time for you to #shadeyourself with a brand new pair of sunnies. You've probably ordered that 'revolutionary' Tanning Oil off Instagram already and replaced all the junk food in the house with leafy substitutes in the quest for your best summer body... but how much thought have you given to readying your
07-27-2018 | Sports
SIRT Bhopal
Sport Complex inaugurated at SIRT Bhopal
Sagar Institute of Research & Technology, Bhopal was established in the year 2003. SIRT is recognized as one of the best engineering college in Bhopal, M.P. It is rated as top Engineering college in Bhopal MP in infrastructure. It is among the best engineering colleges in Bhopal mp in terms of placement. It also enjoys a position of Top Engineering colleges in Bhopal MP for students study & convenience. The
11-10-2017 | Sports
WISE GUY RESEARCH CONSULTANTS PVT LTD
Global Sport Jackets Industry
Global Sport Jackets Industry Latest Report on Sport Jackets Market Global Analysis & 2022 Forecast Research Study In this report, the global Sport Jackets market is valued at USD XX million in 2016 and is expected to reach USD XX million by the end of 2022, growing at a CAGR of XX% between 2016 and 2022. Global Sport Jackets market competition by top manufacturers, with production, price, revenue (value) and market share for
06-29-2017 | Sports
Snowfeet
Snowfeet – New Booming Winter Sport
Snowfeet is a new booming winter sport. It is basically the shortest mini skis on the market. Someone could also call it snowskates or ski skates, because it is something between skiing and skating.Thousands of people already tried it and regularly go skiing with Snowfeet every winter. Some experts assume it’s going to become an Olympic sport in the year 2026. Snowfeet originates in a small hilly country in the
Comments about openPR
Your portal is fast, simple, and easy to use. Others may have more functions but they also demand more editing time, you have to preformat the text in order to achieve a good result etc. I think openPR is really fantastic!
Andreas Knepper, wallmedien AG