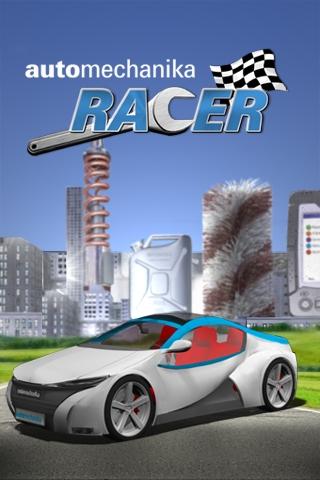 The Automechanika Team has come up with something special for the coming Automechanika in Frankfurt am Main from 11 to 16 September 2012 – the ‘Automechanika Racer’ – an online game that is also available free of charge as an app from the Apple Store. The idea is to drive a prototype car as quickly as possible to the Automechanika in Frankfurt. At the start, however, it immediately becomes apparent that the car is not in the best condition. The challenge for the player is to drive as quickly as possible to Frankfurt and to put the car back into shape at various places during the journey. Important are dextrousness and fast reactions because a variety of obstacles and surprises await the driver along the route, which begins at a scrap yard. Moreover, drivers can earn additional points, for example, by having the car sprayed or repaired in a workshop, by driving it through the carwash or equipping it with additional accessories. A driver-training session at the Nürburgring will be raffled among the 50 best participants. Additionally, tickets for the Automechanika will be raffled among all players at the end of each month. The closing date for the competition is 13 June 2012. Innovative is not only the specially developed method of steering by finger or arrow keys on the rear of the car but also the technical aspects, e.g., the game has been programmed completely in HTML5 and Javascript, which calls for the use of a modern browser (Firefox 8, Internet Explorer 9, Chrome 12, Safari 5 or higher). The game is an incentive via which the Automechanika aims to reach younger people from the workshop sector. ‘Automechanika Racer’ is available not only in German but also in English and is, therefore, perfect for attracting the interest of visitors from outside Germany, too. Hop in and test your driving skills at www.automechanika-racer.com. Link to the app: http://itunes.apple.com/de/app/automechanika-racer/id514013378?mt=8Background information on Messe Frankfurt Messe Frankfurt is Germany’s leading trade fair organiser with € 457* million in sales and 1,769* employees worldwide. The Messe Frankfurt Group has a global network of 28 subsidiaries, five branch offices and 52 international Sales Partners, giving it a presence for its customers in more than 150 countries. Events ‘made by Messe Frankfurt’ take place at more than 30 locations around the globe. In 2011, Messe Frankfurt organised 101 trade fairs, of which more than half took place outside Germany. Messe Frankfurt’s exhibition grounds, featuring 578,000 square metres, are currently home to ten exhibition halls and an adjacent Congress Centre. The company is publicly owned, with the City of Frankfurt holding 60 percent and the State of Hesse 40 percent. For more information, please visit our website at: www.messefrankfurt.com *Provisional figures (2011)Messe Frankfurt Exhibition GmbH Ludwig-Erhard-Anlage 1 60327 Frankfurt a. M. Telefon +49 69 75 75-0 Telefax +49 69 75 75-64 33 info@messefrankfurt.com www.messefrankfurt.comPress contact: Dr. Ann-Katrin Klusak Tel +49 69 75 75 - 5621 Fax +49 69 75 75 - 6337 ann-katrin.klusak@messefrankfurt.com

You can edit or delete your press release Online game: drive the ‘Automechanika Racer’ to Frankfurt here