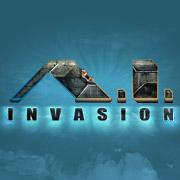 After the first few hints about the story of the upcoming smash hit action game were revealed, more information has been given as to how the story will unfold.

On the distant planet of Erion, the futuristic city and human headquarters „Erion One“ serves as a base for all expeditions into the most fiercely contested territories, and protects its inhabitants from attacks by the A.I. with a powerful forcefield.
Here you can equip yourself, build up your specific character attributes, look for a better place to live, fight in the arena, use the messaging system and so on.

Whether the player wants to start a single or team mission, take part in a battle against another clan or the A.I., or would rather just destroy a few machines and sell the parts for credits, then they can teleport – á la Star Trek – from Erion One to any of the other territories on Erion.

As soon as the player teleports out of the city, they materialise in a dangerous landscape and the action-packed 3D adventure begins.
Who the player fights against is dictated by which territory they are in.
Thus there are fights between players, aiming to snatch hard-earned credits off one another; battles between clans for control of one of the mines on Erion; and of course fights and battles against the inexhaustible A.I. and their machines.

Alongside the action and the more strategic elements (e.g. when purchasing equipment in the city, the player can choose special items which give them particular skills), there's also something for the RPG fans: with every successful fight or completed mission, players are rewarded with experience points and credits. Experience points can be collected to increase the character's level, which subsequently allows them to buy more advanced equipment. Credits can be used to train up specific character attributes or to pay for new equipment. The player therefore has a huge variety of options for them to pursue their own unique playing style.

Special emphasis is of course also placed on the community features. Everything has been taken into consideration: from separate chat channels for clans and teams to the option of teleporting straight from the base to their friends, who are in trouble and have called for help.

The game will first be released in German, but will then be translated into a variety of different languages, just like the other GameArt Studio games (Holy War, Glory Wars, Tagoria und A.I. War).

GameArt Studio GmbH was founded in 2006 in Berlin and rapidly grew to become one of the most innovative developers and producers of so-called web games. Web games are computer games through which real players can play with and against each other over the internet. They can be played for free on any internet browser, with no software installation or downloads required. With their four games „Holy War“, „Tagoria“, „A.I. War“ und „Glory Wars“, GameArt Studio already entertain over 5 million players worldwide.

You can edit or delete your press release A.I. Invasion – further details of the new MMORPG project here