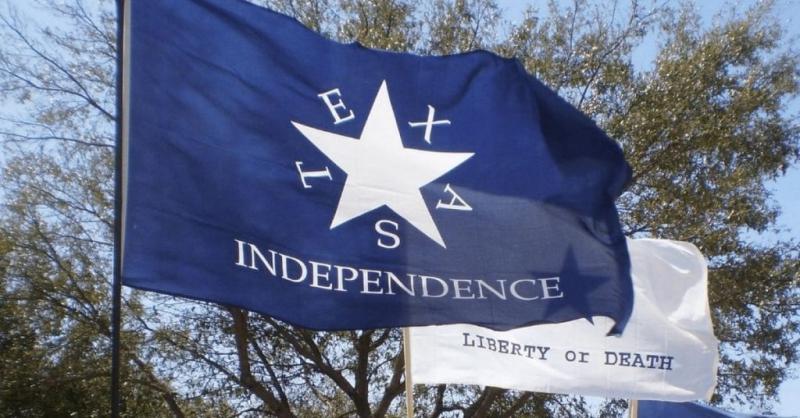 The Texas Independence flag of the Texas Nationalist Movement

In the wake of the first federal presidential debate of the 2020 election, one clear winner has emerged – advocates of Texas leaving the union.Daniel Miller, President of the Texas Nationalist Movement had the following to say after the conclusion of the debate:“If there were any Texans harboring a shred of hope that the union was fixable, it evaporated in that 90-minute free-for-all masquerading as a debate. This was clear from the avalanche of support and inquiries that came pouring in after the debacle. The only winner after last night is the Texas Nationalist Movement.”The reaction from Texans was also visible across social media as the hashtag #TEXIT began to trend and pro-TEXIT memes were being shared thousands of times.Miller said that the new supporters and members are a welcome addition to the TNM.“We’ve steadily grown since our inception in 2005. As public sentiment further swings in our favor, we are clearly on a path toward and have the momentum to get and win a vote on Texas independence.”Texas Nationalist Movement PO Box 403 Nederland, TX 77627 Phone: (800) 662-1836 x4 Web: https://tnm.meExclusively dedicated to the political, cultural, and economic independence of Texas, the Texas Nationalist Movement is one of the largest political organizations in Texas and one of the largest pro-independence organizations in the world.

08-15-2018 | Science & Education
JMA Pilani Rajasthan
JMA Pilani Celebrates 72nd Independence Day
The official celebration for the day happens at Red Fort New Delhi but the celebrations happen with great zeal and gusto across all latitudes, longitudes and altitudes. JMA Pilani has a rich tradition of celebrating various days of national and international significance throughout the year. On 15 Aug 2018, a colorful function was organized to celebrate 72nd India Independence Day. Well known Physician and medical consultant at Birla Institute
06-20-2018 | Leisure, Entertainment, Miscel …
G & P Concrete, LLC
Independence Open Golf Tournament
G & P Concrete, LLC is proud to be a sponsor at this community event! Join the Troy Chamber for our 2nd Annual Independence Open Golf Tournament on Friday, July 13th at Woods Fort Golf Course, Troy, Missouri 63379. Sponsored by Peoples Bank & Trust! Golf Tournaments are always a fun time and you can show off your skills and maybe even win a prize or two! Lunch @ 11:30 am Tee-off @ 1
08-23-2016 | IT, New Media & Software
Algoworks
Algoworks celebrates 70th Independence Day
15th of August holds a significant place in the hearts of every Indian. This year marked the 70th year of celebrating our independence. The entire country rejoiced the great victory of achieving freedom and so did Algoworks. Algoworks celebrated the Independence Day with enthusiasm and true spirits of being an Indian. The entire workplace was flooded with the trio saffron, white and green reminding every soul of the strength and
06-06-2016 | Leisure, Entertainment, Miscel …
The Discovery Leisure Company, Inc.
Discover Independence with The Discovery Leisure Company
The Discovery Leisure Company, Inc. (TDLCI), the homegrown Filipino Hotel Group, releases exclusive offers for its annual “Independence Day” sale. This year, the theme is “Discover Independence” which lets travelers discover exciting new adventures with unparalleled hospitality to any of its esteemed properties for stays until October this year. Book online from 12 to 19 June 2016 and get as much as 50% savings on room rates. For city vacations,
03-15-2011 | Science & Education
Independence University
Independence University Granted ACCSC Accreditation
Salt Lake City, Utah, March 15, 2011 - Independence University (IU), one of the nation’s premier distance education institutions, has been granted accreditation by the Accrediting Commission of Career Schools and Colleges (ACCSC). ACCSC has been granting accreditation to private, post-secondary career schools and colleges for over 40 years and is listed as a nationally recognized, non-profit, independent accrediting agency by the U.S. Department of Education. Accreditation is one of the
05-19-2010 | Industry, Real Estate & Constr …
Messer Group GmbH
Independence – a factor in Messer’s success
The industrial gases company was able to improve its sales in the 2009 financial year compared with the previous year. Independent product supply is supported by a long-term investment strategy. Industrial gases specialist Messer achieved global sales of about 797 million euros in the 2009 financial year, thereby exceeding total sales for the record year of 2008 by approximately two million euros. EBITDA for 2009 was 175 million euros. The total
Comments about openPR
We publish our press releases on openPR.de because we like people who are "open" - just like us.
Frank Obels, CEO, INCONET - Informationssysteme, Communication und Netzwerkberatung GmbH