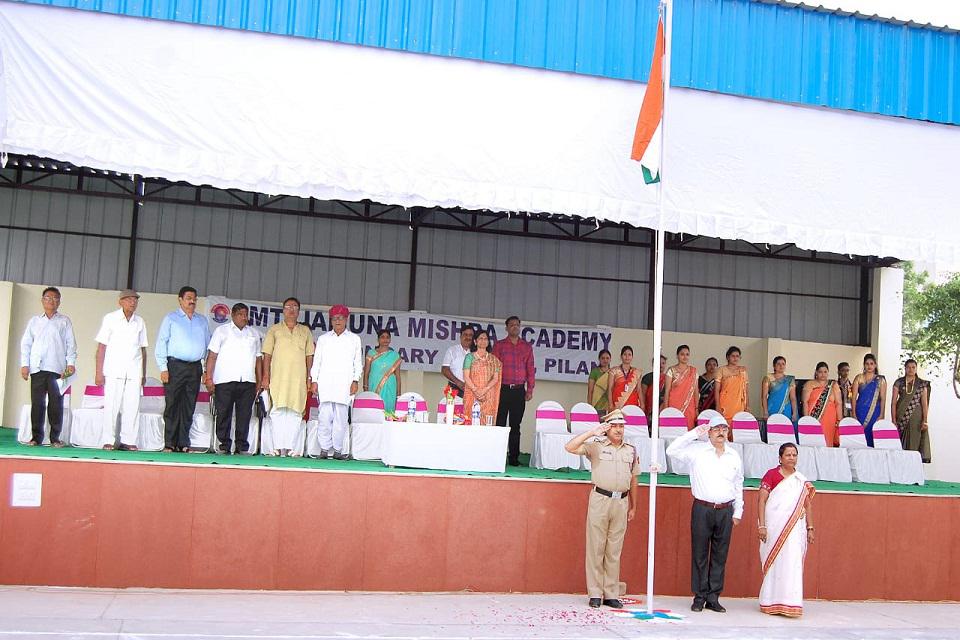 The official celebration for the day happens at Red Fort New Delhi but the celebrations happen with great zeal and gusto across all latitudes, longitudes and altitudes. JMA Pilani has a rich tradition of celebrating various days of national and international significance throughout the year. On 15 Aug 2018, a colorful function was organized to celebrate 72nd India Independence Day. Well known Physician and medical consultant at Birla Institute of Technology and Science - BITS Pilani Dr R P Pareek is presently the Chairman of the Municipal Board of Vidya Vihar Pilani Rajasthan was the Chief Guest for the occasion. He is a graduate and post graduate from SP Medical College Bikaner and was trained in Endocrinology and Diabetes at AIIMS Delhi. Later he became a Proud to be BITSian by acquiring MPhil in Hospital and Health Systems Management from BITS Pilani.He has various publications in national and international journals and has delivered invited lectures at major conferences such as APICON, NAPCON and RSSDI. With several wards to his credit, he has authored a book on diabetes and weight management and chapters in medicine update of Association of Physicians of India. He has played active role in clinical trials for industry such as TTK Bengaluru.. He is Vice Chairman of Association of Physicians of India (API), Rajasthan Chapter and is a member of scientific committee of the Rajasthan Chapter of Research Society for study of Diabetes in India – RSSDI. He has been involved in various social initiatives through NGOs like NIRMAN and NSS at BITS and Sewa Barti and Bharat Vikas Parishad at State and National level. The Chief Guest Dr RP Pareek was received with traditional honour of tilak, hand bandhej safa and bouquet. He hoisted the tiranga and the school band played the national anthem. Mrs Booma Natarajan in her welcome address highlighted the significance of the day and reiterated some of the points from President of India Shri Ram Nath Govil address to the nation which included that education is for betterment of humanity, 2 Oct 2018 is 150th birthday of Mahatma Gandhi and that in less than thirty years India will be celebrating the Centenary of Independence. Ms Aarti Kashiramka Economics teacher introduced the Chief Guest to the audience who needed no introduction as he has been participating every year in the medical camp conducted at JMA Pilani right from the inception year. The Chief Guest inspected the parade and took the salute at the march past. The patriotic song had the audience peaking with patriotism while the song Aye mere watan ke logon had tears in the eyes. The speech in English – My Nation by Ayushi of Class 10 and speech in Hindi Azadi ka Din by Arvind also of Class 10 was appreciated by one and all. The band display was spectacular while the Yoga display was spellbinding. Chief Guest in his speech appreciated all the programs and made special reference to Yoga display. He congratulated the President Dr Suman Mishra, Principal Mrs Booma Natarajan and all teachers and staff for putting tireless efforts in making JMA Pilani as one among the most sought after schools in Pilani. The program was anchored by Sri Mahender Kumar Hindi Teacher who also proposed vote of thanks. When the celebrations ended, the students and parents of JMA who had come for the function left with beaming faces and pride that they were indeed part of an institution which is a shining jewel in the crown among the schools at Pilani.For more details about JMA Pilani see http://www.jmapilani.org/About JMA Pilani: Smt. Jamuna Mishra Academy (JMA) established in the year 2004 is presently one of the most sought after schools at Pilani considered as Oasis in the desert state of Rajasthan well known in India today for top ranking institutions like BITS Pilani University as well as CSIR Laboratory CEERI and globally renowned Birla Science Museum. JMA Pilani is a Co-educational English Medium School with Experienced Teachers, Spacious Classrooms and Modern Amenities designed to impart Quality Education combined with All Round Personality Development and lay the Best Foundation for the Child’s Future. While the school admits both boys and girls, the girl student enrollment has been steadily rising every year and is presently nearly 50% of the total strength. The school has boys NCC, girls band which has been winning laurels every year too. Yoga and Fine arts are not just part of school routine but a way of life for the students.Mrs Booma Natarajan, M.Sc., M.A., B.Ed. Principal, Jamuna Mishra Academy – JMA Near Old Pilani Post Office Pilani Rajasthan 333031 India Phone 91-1596-242314 Email booma_pilani at yahoo.co.in Website: http://www.jmapilani.org/ FaceBook: https://hi-in.facebook.com/JMAPilaniRajasthanRank1/?ref=py_c