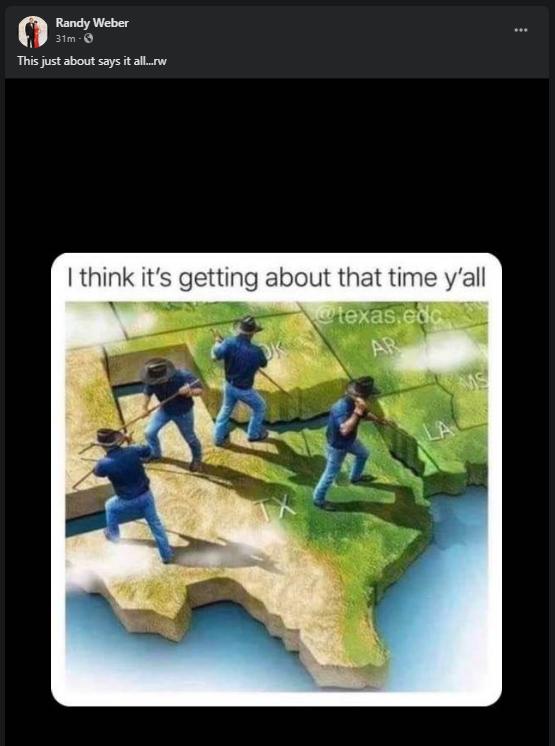 Texas Congressman Randy Weber took to Facebook and signaled his support for Texas independence by posting a widely-circulated graphic of Texans pushing Texas away from the rest of the United States. The image was accompanied by Weber's comment, "This about says it all..."Although media outlets did not initially notice the post, the Texas Nationalist Movement did catch it and shared it on all social media outlets and its website. Weber's use of a graphic, a favorite of Texas independence advocates, went viral, leading to a spike in support registrations and memberships. Daniel Miller, President of the Texas Nationalist Movement, had the following to say about the Congressman's post:"We regularly interacted with Congressman Weber when he was in the Texas House of Representatives. He was always pro-Texas in the House. It's good to see that the seeds we planted in our discussions years ago are bearing fruit, and he has become pro-TEXIT."Miller said that the new supporters and members are a welcome addition to the TNM."We've steadily grown since our inception in 2005. Millions of Texans are waking up to the fact that our political destiny is decided in places like California, Georgia, Pennsylvania, and New York and are disgusted at the realization. As public sentiment further swings in our favor, we are clearly on a path toward and have the momentum to get and win a vote on Texas independence."TNM Media Relations Media Line: 800-662-1836 x4 Interview Requests: https://tnm.me/mediaOur mailing address is: Texas Nationalist Movement PO Box 403 Nederland, TX 77627Exclusively dedicated to the political, cultural, and economic independence of Texas, the Texas Nationalist Movement is one of the largest political organizations in Texas and one of the largest pro-independence organizations in the world. The Texas Nationalist Movement has worked for 15 years to bring a BREXIT-style vote to Texas and see Texas as a free, independent, and self-governing nation. More information about the Texas Nationalist Movement can be found at TNM.ME.