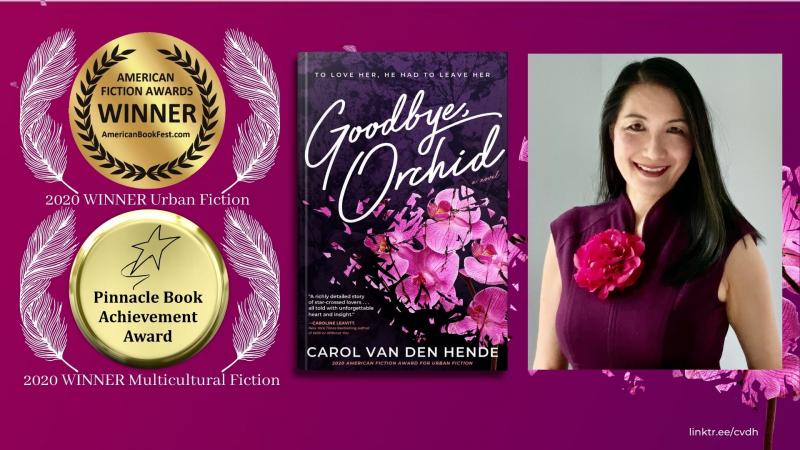 Introducing Goodbye, Orchid, a novel designed to inspire hope and empathy. Debut author Carol Van Den Hende pens a tale inspired by combat-wounded veterans. Award-winning novel Goodbye, Orchid explores an accident that leaves a successful entrepreneur Phoenix Walker forever changed. In the aftermath, he’s faced with the hardest decision of his life. Does he burden Orchid, the woman whose traumatic childhood makes him feel protective of her? Or does true love mean having to say Goodbye, Orchid? Goodbye, Orchid won the 2020 American Fiction Award for urban fiction and 2020 Pinnacle Achievement Award for multicultural fiction. The story has also been named a most anticipated fall read by Buzzfeed, Parade and Travel+Leisure. Carol collaborated with wounded veterans like Purple Heart recipient and disability activist Sgt Bryan Anderson, to get the physical and emotional details right. For both Bryan and Phoenix, the period following their accidents made them question their ability to be a whole man. After being “blown up,” Bryan writes “…I hoped that if [my girlfriend] never saw me again, she would always remember me the way I was…I didn’t want to see her seeing me like this, in my hospital bed after being blown to pieces…I’d thought that she would see me the way I was seeing myself, seeing only what was missing. …For the longest time, I thought I was only half a person – half a body.” For both men, healing comes in the form of a new realization. “…when she looked at me, she didn’t see my missing limbs or scars or burns. She saw me, the real person…[she] made me feel whole again, like a real person, not just half of one,” Bryan writes in his memoir, No Turning Back. Bryan says the same of Goodbye, Orchid. “I like the way Carol writes. She gets who I am. She gets my experience.” PRAISE FROM MILITARY VETERANS “As a combat decorated and wounded veteran, Goodbye, Orchid captures the mindset, roller-coaster and daily heroics of my experience after being injured. All around excellence.” —Doc Jacobs, Bronze Star with Valor and Purple Heart-decorated Navy Corpsman, CEO Doc Jacobs Foundation, author There and Back Again “In this most worthy novel, the protagonists’ lives are shattered and they re-emerge champions A tale of sacrifice and rebirth; heroism is in the details.” —SSGT Aaron Michael Grant, author of TAKING BAGHDAD: Victory in Iraq With the US Marines “Goodbye, Orchid touches on the very real yet ignored psychological challenges from traumatic injuries; including the impact on self-image, and the prospect of sacrificing love. Ultimately, though, this story's strength is in its resilience and optimism.” —Command Sergeant Major Dennis Woods retired, author of Black Flag Journals, One Soldier's Experience in America's Longest War GOODBYE, ORCHID is available where books are sold, releasing October 1, 2020 Koehler Books 3705 Shore Dr Virginia Beach, VA 23455 carol@koehlerbooks.com Koehler Books is a Virginia-based independent publisher founded in 2010. The company works with authors throughout the United States and around the globe. Koehler Books has published nearly 800 print and eBook titles in multiple fiction and non-fiction genres. Koehler’s more than 400 authors have won scores of literary awards, and their books have ranked as category best sellers on Amazon.

07-09-2018 | Business, Economy, Finances, B …
we.CONECT Global Leaders GmbH
CiMi.CON Evolution Award 2018
Berlin, July 5, 2018 – At the CiMi.CON Evolution 2018, held from July 2-4, gathered the top experts in the industry. Co-Hosted with the Pharma CiMi.CON, these two conferences provide a unique glimpse into the fascinating world of competitive and market intelligence. Over 300 attendees participated in this year’s event, which offers a diverse range of topics and formats. On the evening of day one, the CI experts took part
01-04-2018 | Energy & Environment
FAIE HandelsgesmbH
FAIE INNOVATION AWARD 2018
For hundreds of years, humanity has passed on from generation to generation valuable knowledge about the agricultural economy. Farmers from around the world work in various conditions, using a variety of methods and techniques. Every day they prove their dexterity, knowledge and ability to adapt. However, the climate and global changes of our era pose new challenges to them more often than ever before.Progress is not only taking place in
09-09-2016 | Leisure, Entertainment, Miscel …
Phatmagic
NATIONAL AWARD
From Abracadabra to alakazam magician inline for National award Midlands, Sept. 7. 2016 - A MAGICIAN who has fought back from depression could be in line to win a national award. Eddie Young, who runs PhatMagic, has been nominated for a Kallikids award The 42-year-old, from Branston, set up Phat Magic more than four years ago after his wife, Debbie, bought him a magic set to 'give him something to do' while
05-24-2012 | Health & Medicine
Otto Bock HealthCare GmbH
Comprix Award for Ottobock
Advertising campaign changes healthcare communication True to the motto of this year's award "Best of...," Otto Bock HealthCare GmbH won the 2012 Comprix Gold Award over 301 competitors. The jurors presented the trophy for creative healthcare communication at the anniversary gala at the Tanzbrunnen in Cologne on May 4. In cooperation with the Düsseldorf agency Brand Pepper, the medical equipment company scored points for its advertising campaign for the Genium microprocessor-controlled
10-26-2011 | Advertising, Media Consulting, …
Neschen AG
Viscom award for Neschen
Third award in succession confirms the high innovative strength of the Bückeburg-based media specialist Bückeburg, 26 October 2011 - Neschen AG has received an award for the third time at the Viscom. They received an award for the digital print wallpaper "Erfurt wallpaper CA" in 2009 and in 2010, an award for the Expolinc counter solution, which acts as a high-quality transport box for portable display systems. This year, the
07-14-2008 | Health & Medicine
BookSpring
Volunteer Receives Award
BookSpring Names Mary Reynolds “Outstanding Reach Out and Read Advocate” AUSTIN, TX – BookSpring is proud to announce that Mary Reynolds has received the “Champion of Children’s Health and Literacy Award” for Outstanding Reach Out and Read Advocate. This award is an honor which recognizes individuals who make singular and outstanding contributions to the Reach Out and Read program in Central Texas. Mary Reynolds, President of Around Austin, Inc. and member
Comments about openPR
We publish our press releases on openPR.de because we like people who are "open" - just like us.
Frank Obels, CEO, INCONET - Informationssysteme, Communication und Netzwerkberatung GmbH