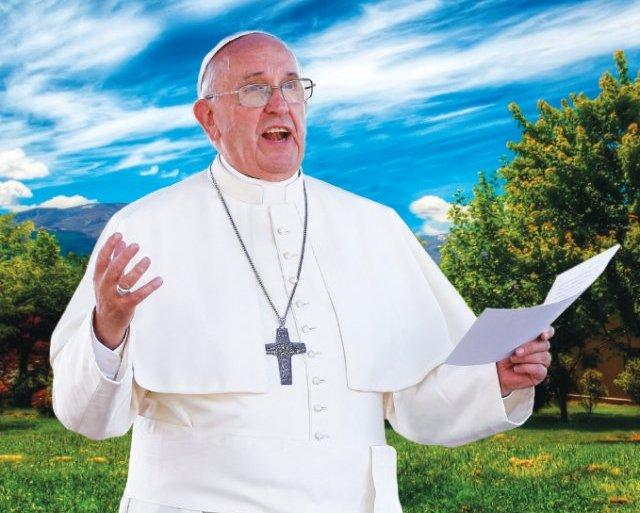 09-19-2020 | Leisure, Entertainment, Miscel …
Advent Messenger
Adventists in Germany are Conducting Ecological Surveys on their Members to Prom …
The Seventh-day Adventist Church in Germany is dedicated to solving the earth’s ecological crisis. Pastor Johannes Naether, Vice President of the Seventh-day Adventist Church in Germany, is conducting ecological “surveys” on the members of the church to help encourage them to live in a “sustainable” and “climate-friendly way.” This new effort is due to the COVID-19 pandemic. According the Pastor Naether, the “surveys” are designed to make an “inventory of
09-19-2020 | Leisure, Entertainment, Miscel …
Advent Messenger
When ‘Churches’ Promote a Transgender Jesus with Woman’s Breasts and Lipst …
This is a perfect illustration about everything that is wrong with the progressive, liberal, inclusive, modern church. Once you head down this path, you end up with an effeminate, transgender Jesus with woman’s breasts, lipstick and rosy red cheeks jumping through LBGT+ rainbows. The National Church of Iceland, also called the Evangelical Lutheran Church, is the state church of Iceland and professes the Lutheran faith. They paid $12,500 (EUR) for
09-19-2020 | Leisure, Entertainment, Miscel …
Advent Messenger
Pope Francis will take his Message on Climate Change to the UN General Assembly
On September 21, 2020, Pope Francis will promote his social and climate agenda in the international community. He will address the 193 member states of the United Nations General Assembly and is expected to urge them to adopt his policies on “integral ecology” (Laudato Si’) that address the environment, the economy and social justice. The Boston Pilot, the official newspaper of the Roman Catholic Archdiocese of Boston, published the following: “When
09-14-2020 | Leisure, Entertainment, Miscel …
Advent Messenger
Radical Feminists at the United Nations Blame the COVID-19 Crisis on Men and Fat …
The United Nations is taking advantage of the COVID-19 pandemic to advance its radical feminist attacks on marriage, family, fatherhood and men. Our world is increasingly showing more and more contempt for fathers and and the traditional biblical family. But the latest post by the United Nations beats them all. The United Nations is now saying that the COVID-19 crisis is proving that the “millennia of patriarchy” has been very

09-05-2020 | Leisure, Entertainment, Miscel …
Advent Messenger
Stop the Roman Catholic Indoctrination of our Seventh-day Adventist Youth in Eur …
The Taize Pilgrimages are annual ecumenical gatherings created for young people. About 20,000 young people attend each of the Taize Pilgrimages organized by the Roman Catholic Monk, Brother Alois. Their non-doctrinal unity of brotherhood is in line with the Vatican’s agenda on ecumenism. Pope Francis loves this religious order. Prayers, chanting, singing and sentimentality form the perfect faith without creeds where everyone can unite. Francesco Mosca is the Seventh-day Adventist
08-26-2020 | Leisure, Entertainment, Miscel …
Advent Messenger
An Independent Seventh-day Adventist Media Ministry is Being Censored for its Co …
Conservative groups and opinions are being targeted on social media platforms. Big tech companies such as Google, Facebook and Twitter are censoring people for expressing socially conservative views or for sharing content that does not contain a certain politically correct tone. Tyrannical governments are now in bed with tyrannical media giants. The goal is to control the information. A small group of people want to determine what is and what isn’t
05-12-2020 | Arts & Culture
Advent Messenger
The Adventist Church in Germany Supports the Government Use of Smartphone Tracin …
Johannes Naether, President of the North German Union Conference, issued a statement on April 15, 2020 indicating that the Seventh-day Adventist Church in Germany supports the government's use of tracing apps to track the movement of its citizens on their smartphones. Germany is implementing a monitoring program to ensure that its citizens comply with the COVID-19 social distancing restrictions and to warn people if they come into contact with an
08-06-2018 | Business, Economy, Finances, B …
ReportsWeb
Community Food Housing And Relief Services Market Explore Growth 2018-2025 by Le …
ReportsWeb.com added “Community Food Housing And Relief Services  Market " - Global Trends, 2018 Analysis and 2021 Forecasts” report to its research database. This Report is spread across 125 Pages and Supported by 06 Company Leaders. The global community food, housing, and relief services market was valued at $1625.3 billion in 2017. Asia Pacific was the largest geographic region accounting for $697.2 billion or 42.3% of the global market. China was the
04-27-2017 | Health & Medicine
Bio-Optronics
Adventist Health System, Bio-Optronics Partner on CTMS Deployment to Foster Clin …
April 27, 2017 – ROCHESTER, NY – Bio-Optronics and Adventist Health System (AHS) today announced the implementation and initial rollout of the Clinical Conductor Clinical Trial Management System (CTMS) at two of the faith-based health care system’s research institutes. This deployment, which included a CTMS-EMR integration with Cerner Millennium, will maximize process efficiency and enhance the organization’s overall research quality. A national leader in patient care, this implementation enables AHS
03-16-2012 | Energy & Environment
SGS
SGS helps Taiwan Adventist Hospital become the World's First ISO 50001:2011 Cert …
SGS is pleased to announce that it has certified Taiwan Adventist Hospital in Taiwan against the ISO 50001:2011 Energy Management Systems Standard on February 21, 2012. Taiwan Adventist Hospital is the world’s first hospital to have obtained this certification just following the publishing of ISO 50001:2011 by International Organization for Standardization (ISO) on June 15, 2011. The Taiwan Adventist Hospital has introduced ISO 50001:2011 to its campus. The hospital identified three
Comments about openPR
OpenPR ist the nicest and most clearly laid out PR platform I have seen to this day. The press releases are displayed very nicely and clearly and without any unnecessary frills. The updates are fast and the finished release looks appealing and is clearly legible. Even with 16 years of experience one discovers new things from time to time. Congratulations!
Gabriele Ketterl, Director Marketing & PR, Menads