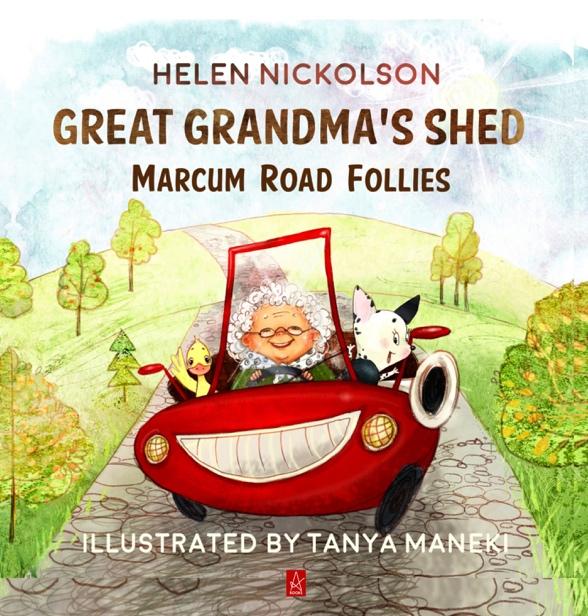 ADELAIDE BOOKS is proud to offer the latest work by Helen Nickolson Great Grandma’s Shed: Marcum Road Follies hitting stores everywhere on now. While driving her daughter Katherine to daycare about 28 years ago, Helen began telling her “dreams” about Old Red, the kind convertible with magical powers who lived next to them in the country. He also had some adopted buddies–a Dalmatian called Cutie Pie and a duck named Teepo. These stories were very comforting to Katherine, especially when she didn’t want to be separated from her mother. Years later, she still would oftentimes ask her mother if she had had a “dream,” so Helen began recording the adventures of Old Red. Now, these adventures are together in this heartwarming book. Helen Nickolson was born in Kato Kourouni, a small village in Evia, Greece, which had neither water nor electricity at that time. Sponsored by her aunt and uncle to emigrate to the United States when she was five, she journeyed across the rough Atlantic Ocean in December on an Italian ship. From New York, she then travelled by bus to Lodi, California and arrived on Christmas Eve. Her name in Greek is Eleni Nikolaou and was changed by her uncle to “better assimilate” into American society. He meant well. After high school, Helen attended the University of California at Davis where she majored in English. She went on to graduate school at California State University, Sacramento and received her MS in Counseling Psychology and MA in English. Helen worked as a counselor and also taught English and Psychology at Yuba Community College for 30 years before retiring. She has been married for 35 years to Larry Michel, and Katherine is their only child. Available on AmazonFor information regarding this title and its Author, or any other title by Adelaide Books, or to receive ARC reviewers copy of this book, please write to office@adelaidebooks.org244 Fifth Avenue, Suite D27 New York City, NYADELAIDE BOOKS LLC is a New York based independent company dedicated to publishing literary fiction and creative nonfiction. It was founded in July 2017 as an imprint of the Adelaide Literary Magazine, with the aim to facilitate publishing of novels, memoirs, and collections of short stories, poems, and essays by contributing authors of our magazine and other qualified writers.

08-06-2021 | Arts & Culture
Adelaide Books
New Book by Erica Abeel: The Commune
ADELAIDE BOOKS is proud to present the latest work by Erica Abeel: The Commune Her current novel The Commune is a comic satire and roman a clef that takes us inside the Hamptons commune populated by the newly liberated women present at the creation of the seminal 1970 Women's March for Equality. The Commune's pioneering feminists can talk the talk, but find themselves whipsawed between the bold new ideals of the
06-08-2021 | Arts & Culture
Adelaide Books
New book by Gregory Vincent St. Thomasino: Stephen's Landing
ADELAIDE BOOKS is proud to offer the latest work by Gregory Vincent St. Thomasino: Stephen's Landing hitting stores everywhere now. Stephen Child is in his mid-twenties. His mother died giving birth to him, his father died accidentally when he was a little boy, and he was raised in the family of his Aunt Gloria. He has recently returned to college after taking some time off and after studying at music
03-08-2021 | Arts & Culture
Adelaide Books
Time is the Enemy collection of poems by Matt Barker
Time is the Enemy is a collection of poems best described as raw thoughts captured in ink. Barker delivers unfiltered observations of life and society, told through gritty wordplay and a sarcastically sinister narrative. Barker’s work uses unorthodox arrangements and a direct approach to shed light on overthinking and anxiety. Language: English Paperback: 68 pages ISBN-10: 1951214439 ISBN-13: 978-1951214432 Product Dimensions: 6 x 0.2 x 9 inches Matt Barker grew up in the suburbs of
01-18-2021 | Arts & Culture
Adelaide Books
New Book by Clay Anderson: The Palms
ADELAIDE BOOKS is proud to offer the latest work by Clay Anderson The Palms hitting stores everywhere now. Sixty-eight-year-old Ronnie Wells has recently been paroled for a murder he committed thirty-six years before. He lives in a run-down trailer park outside Pensacola, Florida, and busies himself by maintaining his trailer—it’s the nicest in the park—and never being late for work. Daily life for Ronnie changes when he befriends Mary, the