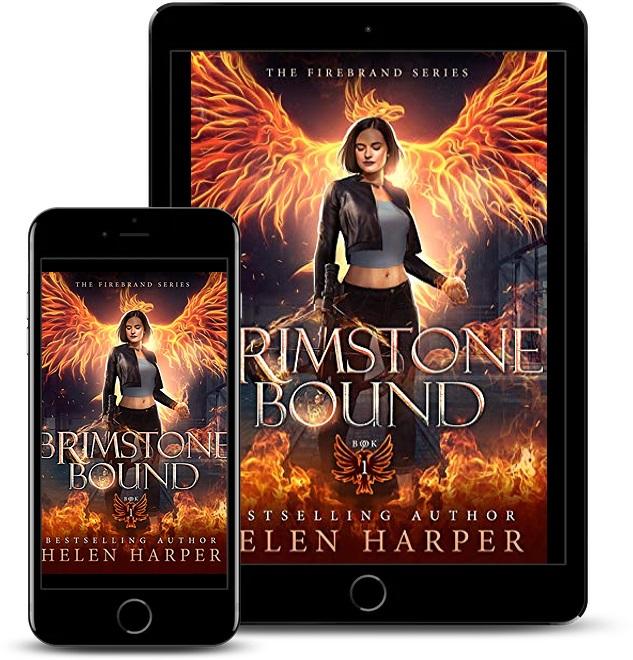 Author Helen Harper Releases Urban Fantasy - Brimstone BoundInternational author, Helen Harper is pleased to announce the upcoming release of her new urban fantasy, Brimstone Bound. Scheduled for release on September 3, 2020 the book is already receiving rave reviews from readers and reviewers being called a dark, twisty, magical thrill ride. A werewolf killer. A paranormal murder. How many times can Emma Bellamy cheat death?I’m one placement away from becoming a fully fledged London detective. It’s bad enough that my last assignment before I qualify is with Supernatural Squad. But that’s nothing compared to what happens next.Brutally murdered by an unknown assailant, I wake up twelve hours later in the morgue – and I’m very much alive. I don’t know how or why it happened. I don’t know who killed me. All I know is that they might try again.Werewolves are disappearing right, left and centre.A mysterious vampire seems intent on following me everywhere I go.And I have to solve my own vicious killing. Preferably before death comes for me again.Book Details: Brimstone Bound Firebrand, Book 1 By Helen Harper Release Date: September 3, 2020 ASIN: B0898YBNRF Pages: 240 Genre: Urban Fantasy About the Author: After teaching English literature in the UK, Japan and Malaysia, Helen Harper left behind the world of education following the worldwide success of her Blood Destiny series of books. She is a professional member of the Alliance of Independent Authors and writes full time, thanking her lucky stars every day that's she lucky enough to do so!Helen has always been a book lover, devouring science fiction and fantasy tales when she was a child growing up in Scotland.She currently lives in Devon in the UK with far too many cats – not to mention the dragons, fairies, demons, wizards and vampires that seem to keep appearing from nowhere.Contact: Website: http://www.helenharper.co.uk Twitter: http://www.twitter.com/HarperFire Facebook: http://www.facebook.com/HarperFire Promo Link: http://bookbuzz.net/blog/urban-fantasy-brimstone-bound/#fantasy #urbanfantasy #helenharper #BrimstoneBound #bookbuzzBookBuzz.net 59 Heritage Way Drive Rome, GA 30165Website: http://bookbuzz.net/blog/urban-fantasy-brimstone-bound/BookBuzz.net helps indie authors, hybrid authors, and small publishers promote and market their books. We also help with book reviews, publicity, and more. Let's Create Some Buzz For Your Book!!!

04-15-2019 | Logistics & Transport
SMi Group
Senior RAF representative to present on Typhoon jet capabilities as Tornado reti …
SMi reports: Senior expert from the RAF will be discussing the recent advancements in Typhoon jets as they replace the retired Tornado at the Close Air Support Conference in London, this June. In recent news, RAF Typhoons are all set to replace the retired Tornados in Operation ‘Shader’, as they carry the Brimstone 2 precision attack missile for the first time in January. This means that the Typhoon can now transport
12-27-2018 | Business, Economy, Finances, B …
DataSeers, Inc.
A Big Success for the DataSeers "Feed the Hungry" Campaign
One thousand meals in under six hours. That was the work of a team of volunteers led by local Tech Startup, DataSeers. The meals were lovingly prepped, cooked, and delivered for dinner to those in need around the Metro Atlanta area… and just in time for the holiday season! The campaign, led by DataSeers’ CEO, Adwait Joshi, operated under the heartfelt belief that no one should be
12-03-2018 | IT, New Media & Software
DataSeers, Inc.
An Atlanta Based Startup with a Charity Campaign to Fight Hunger
No one should be hungry this holiday season. This is the motto of a charity campaign organized by DataSeers in partnership with the Fire and Brimstone Tavern, located in Alpharetta. Our mission for this event is that one thousand freshly prepared meals be donated to families and individuals across Metro Atlanta. The food will be lovingly prepared and distributed to various locations across the metro area in partnership
10-19-2017 | Associations & Organizations
Ann Storck Center
Guests Wine and Dine at the 24th Annual Celebrity Chefs Food Tasting & Auction
Fort Lauderdale, FL (October 18, 2017) – On Friday, October 6th, 2017, approximately 500 guests arrived at Hard Rock Live at Seminole Hard Rock Hotel & Casino in Hollywood for the 24th Annual Celebrity Chefs Food Tasting & Auction to dine on the delicious culinary delights of local restaurants and to raise much needed funds for Ann Storck Center (ASC). The annual Celebrity Chefs Food Tasting & Auction event has
09-27-2017 | Associations & Organizations
Ann Storck Center
24th Annual Celebrity Chefs Food Tasting & Auction
Fort Lauderdale, FL (September 26, 2017) - Ann Storck Center (ASC) invites you to be a part of its 24th Annual Celebrity Chefs Food Tasting & Auction on Friday, October 6, 2017 starting at 6 p.m. with a silent auction reception and the Grand Tasting beginning at 7:30 p.m. at Hard Rock Live at Seminole Hard Rock Hotel & Casino in Hollywood, Florida. This signature event features dozens of culinary
04-28-2016 | Arts & Culture
Richard Ruhling
How to Survive Martial Law: Prepper Gurus Agree With Matthew 24, Says Expert Ric …
"Googling 'Martial Law, Obama' suggests Obama may not leave office. A pastor's dream in the 1980's offers a similar scenario. Matthew 24 also supports that possibility, especially in view of the disarray of political candidates and the FBI investigation of Clinton," says Dr. Richard Ruhling, author on Bible prophecy. He also offers thoughts on 'strategic relocation.' More than two million results for 'Martial Law, Obama' on Google and many articles suggest
Comments about openPR
I can't but agree to the positive statements about your portal: easy to use, clear layout, very good search function, and quick editing!
Jens O'Brien, Borgmeier Media Communication