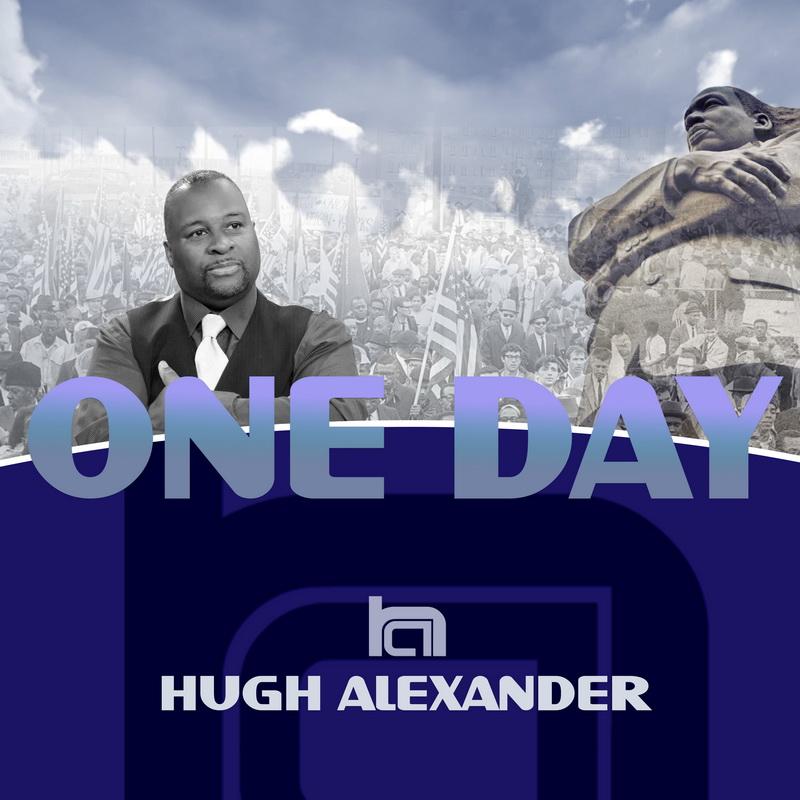 IMPORTANT August 28th Release - “One Day”, a new single that pays homage to the great speech of Martin Luther King, is being hailed as a very important and timely work by many DJ’s and radio stations across the UK and around the world. The song by Hugh Alexander, was written as a response to the current heightening and unsettling debate about racial divisions. The song has also been hailed as homage to the great civil rights crusader, Martin Luther King’s iconic “I have a dream” speech which took place on 28th August 1963 at the conclusion to the historic march to Washington.Hugh Alexander, a UK resident, who wrote and recorded the record in his Spanish apartment during the corona virus lockdown was keen for the track to be available on the August anniversary. Ironically, on the day of the songs actual release (18th of July), two of MLK’s former and close civil rights colleagues, John Robert Lewis and CT Vivian, died.Hugh who formerly had a recording contract in his 20’s, hopes to inspire the world with this new comeback single, Hugh aims to inspire people, especially at a time when everyone is facing troubled times, occasioned by events that are believed to shape the world for the next few years. He also hopes to bring a fresh perspective to the Neo Soul genre. Hugh believes that “no matter what obstructions people may face in life, they should not give up. My music is for the troubled people who need to find their inner peace and then the world will heal”.Hugh is available for Skype or phone interviews on the below contact information.Youtube link to the song: https://youtu.be/3eSquIoyL9kMedia contact info Hugh Alexander – Producer – Writer and Performer http://hughalexandermusic.com/ info@hughalexandermusic.comAbout Hugh Alexander Hugh Alexander is a UK based Neo Soul Gospel artist, a songwriter, and a producer who believes in the uplifting and inspirational power of music.

You can edit or delete your press release Martin Luther King’s Iconic speech anniversary is being celebrated with a powerful new song, One Day by UK artist, Hugh Alexander. here

12-07-2018 | Health & Medicine
Spring Forest Qigong
7 Day Blessing 2019
7 Day Blessing 2019 A Free On-Line Healing Chanting Meditation Event Sunday January 6th through Saturday January 12th A new year is a time for rebirth, renewal, rejuvenation, replenishment, and rejoice. There is no better way to embrace this rekindling of the spirit than communal meditation. Join us January 6 – 12 as we follow the lead of Master Chunyi Lin and three Tibetan Monks in a collective gathering of enlightening meditation. This 7
11-05-2018 | Logistics & Transport
Silver Service Taxi Melbourne
Melbourne Cup Day
The Melbourne Cup is annually held on the first Tuesday in 6th November with the day being a half day public holiday in Victoria and a full day holiday in Melbourne. In This event Silver Service Taxi Melbourne providing a taxi service in very affordable prices because in this event finding a taxi is very difficult and if you are lucky to get one it will cost you a fortune
03-16-2017 | IT, New Media & Software
Algoworks
Women’s Day Celebrations 2017
On the occasion of International Women’s Day, Algoworks celebrated this special time with joy and delight by expressing gratitude towards the women of their workplace, and made them feel special and loved. The entire day was dedicated to all the women employees of Algoworks and their valuable presence in the team was celebrated with glee. The entire premises were adorned with balloons and flowers. Women employees were dressed up in
09-23-2016 | Health & Medicine
PRO RETINA Deutschland e.V.
World Retina Day 2016
On World Retina Day, Saturday September 24th 2016, Retina International urges the Global Retina Community to advocate for access to Genotyping services that will expedite the development of therapies for unmet need. Retinal Diseases are among the most common causes of vision loss in the global working population. The impact of these conditions on quality of life, be they rare and inherited or age-related, is immense. However there is
10-17-2014 | Health & Medicine
Relaxa UK
National Stress Awareness Day
National Stress Awareness Day is on Wednesday 5th November 2014. Relaxa is offering employee stress & wellbeing health promotion packages starting at £255 on or around this date - incorporating a range of stress & wellbeing activities for your staff. There are 9 cost-effective stress and wellbeing promotion packages available below: 1) Stress Health Promotion Package 1 - £255.00+vat 2) Stress Health Promotion Package 2 - £399.00+vat 3) Stress Health Promotion Package 3
10-13-2011 | Leisure, Entertainment, Miscel …
Blue on Highland
Boss Appreciation Day
WHAT: In celebration of National Boss Day, Blue on Highland located in Needham, MA, is honoring all bosses, by offering guests a free appetizer when they dine with their boss during lunch on Monday, October 17th, 2011. Celebrated annually on October 16th, National Boss Day was founded in 1958 when Patricia Bays Haroski, an employee at State Farm Insurance Company in Deerfield, Illinois, designated it a day to show appreciation
Comments about openPR
Your portal is fast, simple, and easy to use. Others may have more functions but they also demand more editing time, you have to preformat the text in order to achieve a good result etc. I think openPR is really fantastic!
Andreas Knepper, wallmedien AG