'One Day Like Rain' Makes World Premiere in Seattle 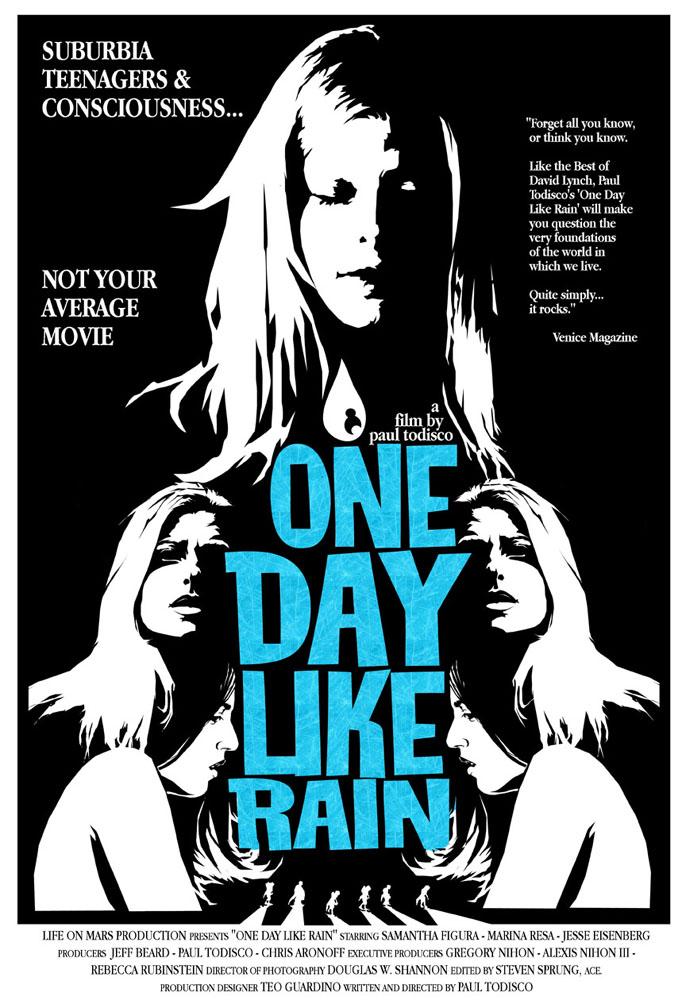 “One Day Like Rain” is a mystical coming-of-age story set in American suburbia. Driven by a desire for meaning and to channel her teenage angst, Gina (Figura) devises a metaphysical experiment designed to save humanity from their self-destructive ways. Her best friend Jennifer (Resa) agrees to participate and as a result experiences a heightened state of consciousness. But this blissful state soon turns dark and Jennifer faces the consequences of meddling with forces she cannot control. Gina vows to quit before effecting humanity on a global scale, but is encouraged to continue by her mentor Ian, a mysterious man who seems to be aware of all of Gina’s activities. Gina is faced with a huge decision, as the coming-of-age story becomes an end-of-the-world drama.

“The film is a creative and innovative mind-trip. Like any experience of mystical awakening, it’s a journey that doesn't follow any rules in the general sense - but rather recognizes structure in a grander, more cosmic sense,” said breakthrough Director Paul Todisco. “I wanted to tell a story about two young people going through that experience and about a world on the brink of transformation.”

“After so much hard work, it’s extremely gratifying to be recognized and to have our World Premiere at the Seattle International Film Festival. We are all so proud of this film and of the great accomplishment that it is. This is a movie I love to just sit back and watch, over and over,” said co-Producer Michel Bayan.

The film is placed in the New American Cinema Competition category which includes an extraordinary selection of films that have yet to receive American distribution. Jurors will select the film that they feel best represents both filmmaking excellence and a creative, original vision. The winner will be awarded a $5,000 cash prize, to be announced at the Golden Space Needle Awards Brunch on the final day of the Festival.

Over the last 32 years SIFF has grown into one of the largest and most highly attended film festivals with over 250 feature/documentary films and 100 short films being presented to an audience of over 160,000 annually.

“One Day Like Rain” was specially chosen to screen near the end of the event as a climax for SIFF, which bring the best in world cinema from fiercely independent fare to studio-produced masterworks.

For more information on “One Day Like Rain” visit http://onedaylikerain.com/.

11-13-2020 | Energy & Environment
hydrogen market
Why hydrogen Demand is increasing Day by Day
Hydrogen is a colorless, odorless, tasteless, and flammable gaseous substance that exists in molecular forms such as water or organic compounds on the earth. It is used in a wide range of application in industries such as petroleum, chemicals, automotive, power generation, nuclear energy, aerospace, telecommunications, food and beverages, and semiconductor. The reforming of natural gas by applying heat is currently the most economical process for producing hydrogen. Here you can
08-27-2020 | IT, New Media & Software
Coherent Market Insights
Smart Elevators Market: innovation Changing day by day!
It is a fast way of traveling between the floors and is preferred to be used in tall buildings or commercial complexes. Increasing government investment for the development of smart cities is one of the major driving factors leading to demand smart elevators. For instance, according to the Indian government Union Budget 2018-19, the government has selected 99 cities under the smart city mission and will provide a fund of
02-05-2020 | Health & Medicine
MAX PET SUPPLIES PTY LTD.
VetSupply Announces a Surprising Special Day Sale This Valentine's Day!
VetSupply, a leading Australia's online pet store announces a Surprising Special Day Sale for the upcoming Valentine's Day. Providing an assortment of pet supplies and pet accessories, VetSupply is eager to offer the most essential pet products at Huge Discounts during this shopping festival. VetSupply is one stop platform for all pet essentials. Dedicated to offer pet products at cost effective prices, the company aims to make pet parenting convenient
01-28-2020 | IT, New Media & Software
L-Soft
New Software Release Makes It Data Protection Day Every Day
L-Soft's New LISTSERV Maestro Email Marketing Software Is the Only Solution Providing Personal Tracking with Subscriber Consent Stockholm (28 January, 2020) - Email marketing gets results. It also requires compliance with data privacy and protection regulations like the EU GDPR and the California Consumer Privacy Act. To help organisations, today L Soft released the newest version of LISTSERV Maestro, the only email marketing software enabling personal tracking with consent from subscribers.
09-05-2018 | Business, Economy, Finances, B …
Customer Numbers
The big daddy of shopping day: Amazon Prime day
Amazon Prime Day has been its biggest shopping event ever with 100 million products sold. As we all know, Amazon is famous around the globe for the products and the genuine products that are sold on this platform. Looking at the popularity, Amazon announces global shopping event for the prime members. It has exclusive benefits for paid members of Amazon. Amazon is mainly famous for its two services. Netflix type
05-22-2017 | Science & Education
Aidi School
AIDI Hosts Successful “Environment Day” Event for Earth Day
Another outstanding event for AIDI! On April 22nd, more than 400 families came to celebrate Earth Day at AIDI International School. In collaboration with TimeOut Family and many local businesses, activity booths were set up all over campus to promote environmental awareness. With beautiful weather as the backdrop for the event, parents and children could choose from a plethora of activities. From tree planting and bookmark crafting to baseball and go-kart
Comments about openPR
Your portal is fast, simple, and easy to use. Others may have more functions but they also demand more editing time, you have to preformat the text in order to achieve a good result etc. I think openPR is really fantastic!
Andreas Knepper, wallmedien AG