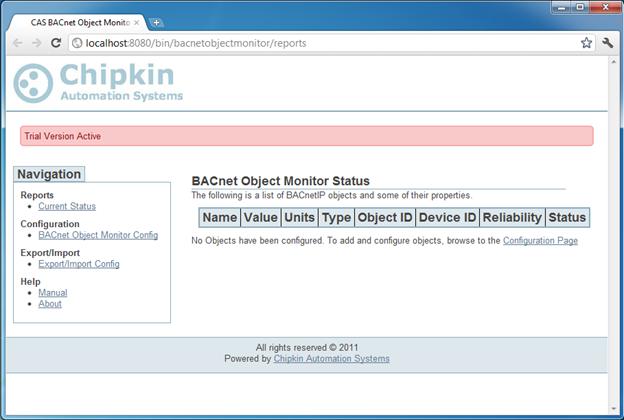 Chipkin Automation Systems Inc. proudly presents its newly developed software named CAS BACnet Object Monitor to the automation world. It is launched in January 2012, a Windows-based software for the automation engineers to test and monitor the connections to BACnet IP devices easily.CAS BACnet Object Monitor is extremely simple to use. A user can configure BACnet data points either manually through a configuration screen or by importing a configuration file. The user can then view connection and status details of the configure points on the status screen. Some requirements are needed for the application to run successfully. First of all, the application must be installed on a computer running a Windows operating system. Secondly, the computer that the application is installed on must be on the same subnet as the BACnet IP device to be monitored or tested. Lastly, the BACnet IP device being monitored or tested must have objects of types: analog input/output/value, binary input/output/value, or multi-state input/output/value.Upon successful download, a user manual will pop up automatically to explain on its general operation, instructions and Frequently Ask Questions. If this application is being used on a trial basis, the notification banner will display the "Trial Version Active" message. The Trial Version limits the user to monitor a maximum of 3 BACnet objects.For more information, please check out http://www.chipkin.com/cas-bacnet-object-monitorChipkin Automation Systems Inc. also developed several automation utilities such as CAS Bacnet Explorer and CAS Modbus Scanner. For additional information on the news of this release, contact Mr. Peter Chipkin or visit www.chipkin.com.Established in 2000, the company is a specialist engineering consultancy providing services that are currently focused on system integration and protocol conversion.Chipkin Automation Systems Inc 3495 Cambie St, Box 211 Vancouver, BC Canada, V5Z 4R3 Toll Free: 1-866-383-1657 press@chipkin.com