Outlaw Country Music From One of The Good Guys 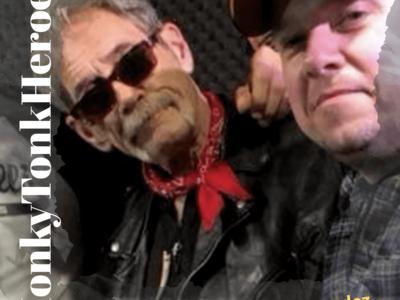 Music is the great equalizer. It really does not matter where you are from, how old you are or what you do for a living. When it comes down to music, we seek understanding, validation, and often an escape from the bumpy journey, we know as life. TJ Hernandez can check all the boxes, and then some with the inspiring, and heartfelt narratives found on his debut album “Destination Unknown”..A 20 year veteran of law enforcement, he’s seen it all, and has lived to tell. This 40 something Gen Xer grew up on the blue collar country sounds of Waylon, and Merle Haggard. Music was an integral part of his rearing as his dad was an avid traditional country music fan. There is a definite shift in the country music air. It is not exactly a Texas Twister, but traditional country music is starting to form a tropical depression in the middle of the ocean. For those of us that have been tracking the storm, we know it’s getting nearer. TJ is a fine example of what’s coming, and has been coming for a long while now. I was able to talk to TJ for #OnTheBrink: A Country music podcast that showcases artists that are on the Here are some highlights of the conversation.Destination Unknown is so inspiring. Can you tell me about that song’s back story?(TJ) That was the last song I wrote for the album. I knew after I wrote it that it would be the title of the album… It relates to musicians, and people in general. It’s about perseverance, none of us really know where we are going to end up at the end of the day. You just have to pick yourself off the floor, and keep going. That line in the song “Every day is a curse, but it’s also a blessing” is very true to me. That song speaks to me at a very personal level.There’s another line in that song “Fight for every moment, but don’t lose sight of the stars”.. When I heard that line in the song..(TJ) Admittedly, I approached that song from a singer/songwriter standpoint. I haven’t been in music for that long, and my destination is truly unknown. I tell everyone I’m just an old couch picker, and have no illusions of being famous or making it big. I’m perfectly ok with that. I got into this because I love music.. But for some reason some folks have caught on to my music, and it’s getting some traction. I have no idea where it’s headed.What was it about Jamey Johnson’s Lonesome Song album that inspired you to give music a shot?(TJ) It put me on the path. When I started listening to Jamey’s music it led me to all these other artists I knew nothing about like Cody Jinks who popped up on my Facebook feed. He was an independent country artist, and started getting alot of traction..The music scene has changed, years ago, you didn’t go anywhere without a label.. All of a sudden, here I am watching this guy (Cody Jinks) becoming successful with nothing but a grassroots movement.. I became a fan of Cody’s approach, and was impressed by how loyal his fan base was. It inspired me. I started writing music. I had never written before this..(TJ) My most enlightening moment came when I saw Cody Jinks at the Ryman. It was such an awesome, and inspiring musical moment for me It was completely sold out, and he was so humble.. I could just imagine the excitement, and anxiety, and the feeling I made it, and didn’t need a label to do it..Press Contact: Sana Mello3200 West End Avenue. Nashville, TN 37203#StoneColdCountry is a blog, and music show that bridges George Jones classic honky tonk country music with the new traditional country music. Our sister podcast #OnTheBrink hosted by Sana Mello is an opportunity for artists to connect on a more meaningful level with their audience.

12-18-2018 | Arts & Culture
Psychic
Interview with Psychic Billy Caputo
Billy Caputo is an amazing psychic based in New Jersey and New York who does Incredible readings, But don’t worry, as he does readings over the phone. He is very gifted with clairvoyance, telepathy and channelling – which is how he can is able to do such accurate readings by phone. He is also the author of seven books. His Readings stem from that on love and future career moves to
02-23-2018 | Business, Economy, Finances, B …
business news
Global Leaf Blowers Market 2018 - Billy, DeWALT, Dolmar, Husqvarna, Makita
The statistical surveying information incorporated into the Leaf Blowers report is the aftereffect of significant essential and optional research exercises. The report fragments the worldwide market for Leaf Blowers based on makers, item compose, applications, and Region. In this report, each fragment is contemplated completely and measurements are introduced in detail. The report offers an exact outline of the worldwide Leaf Blowers advertise covering key factors, for example, drivers and
10-27-2017 | Leisure, Entertainment, Miscel …
Music Promotion Club
Enjoy Billy Quach’s Soothing EDM Track “Prixm” In Soundcloud
Electronic dance music producer Billy Quach has launched his new music “Prixm” in soundcloud. This artist has introduced an amazing lyrical prowess through his music. The new composition of this rockstar will attract numerous fans. Billy Quach has introduced stirring effect through the music. This young and passionate singer is a well-known public figure who is famous as a producer. Also, he will entertain the audience with his amazing beats.
05-24-2011 | Leisure, Entertainment, Miscel …
Simply Theatre Tickets
Simply Theatre Tickets Presents Billy Elliot
WHAT OTHERS SAY: “Billy Boy - this is the greatest musical yet” Daily Telegraph. “Brit Musical of the decade has arrived” Daily Express. “Billy's a whizz! He'll lift your spirits, make you cry and send you home high with hope” Daily Mail. WHAT IS GOING ON: A funny, heart-warming and feel-good celebration of one young boy's dream in a gripping tale of triumph over adversity. This original story captured the hearts and
03-21-2011 | Media & Telecommunications
All Things Media
Country Music Artist Billy Craig Goes Nationwide
Slow and steadily, Country Music Artist Billy Craig is chipping away at the hearts of America and overseas. Not just with his new incredible CD NEXT EXIT PARADISE but also with topical tunes Peace River and Kiss Your Cash Goodbye. For Billy there are two things that are foremost in his heart when talking about his music. . . great songs and great performances. He has gotten a lot of interest
05-06-2009 | Leisure, Entertainment, Miscel …
All Things Media
Country Music Artist Billy Craig Set for Summer Concert Season
Jumping back and forth between band rehearsals and working in the studio, Billy Craig is not only gearing up for one of country music’s biggest event at the WYCD Downtown Hoedown in Detroit, but he’s also finishing up 17 brand new songs for his new CD Release due out this summer/fall. “Billy has put together a smoking hot band and they really have a great show put together for this summer’s
Comments about openPR
Your portal is fast, simple, and easy to use. Others may have more functions but they also demand more editing time, you have to preformat the text in order to achieve a good result etc. I think openPR is really fantastic!
Andreas Knepper, wallmedien AG