Material from another planet 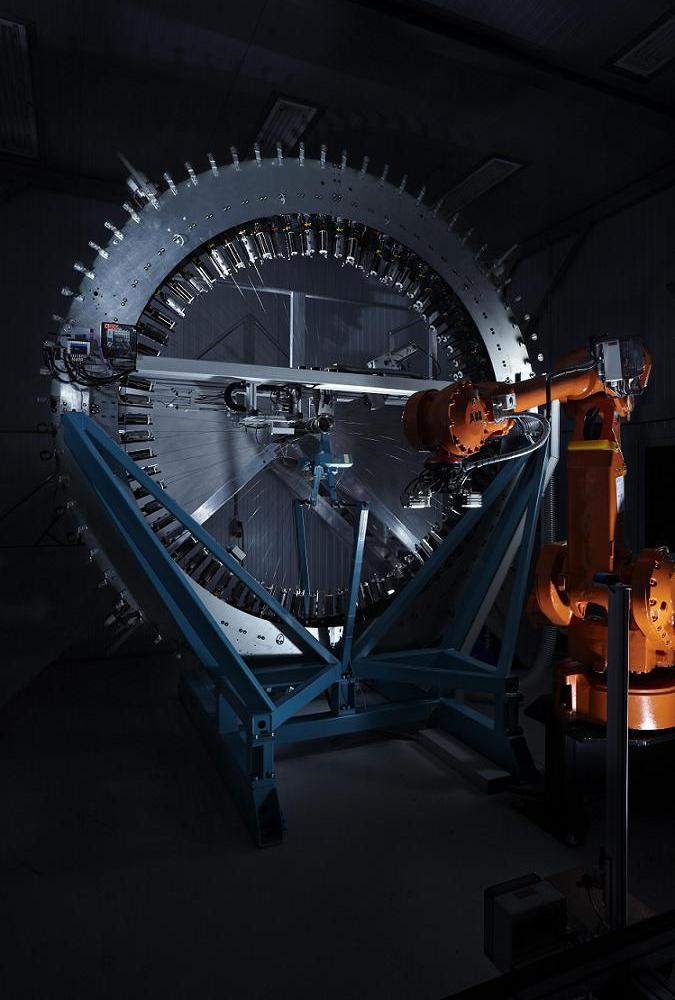 Carbon frames for racing bikes with BINDER technologyCarbon comes into play when something has to be extremely lightweight and highly stable. In Grenchen, Switzerland, automated manufacturing is used with the help of BINDER technology to produce carbon frames for racing bikes for the first time ever. In 2011, Australian Cadel Evens won the Tour de France on a BMC racing bike thanks to the enthusiastic support of his team members, who contested the world's most difficult stage race on carbon racing bikes.They call it "Stargate" and what comes out of it almost seems to come from another planet. A wheel with a diameter larger than a person with outstretched arms produces one of the strongest and lightest materials known to man today: finely woven carbon – the wonder material of racing bike frames. Strictly speaking, "Stargate" is a high-tech braiding machine and part of a complex automation system. The racing bike manufacture BMC headquartered in Grenchen, Switzerland, manufactures the world's first and only carbon frames using a completely automated process. 100 percent automation is synonymous with 100 percent consistently high quality. With perfection in series production, its BMC designers have called it "the impeccable bike" or "impec" for short.Seamless tube Where carbon frames had to be painstakingly laminated, shaped and glued by hand from individual layers until now, production at BMC runs cleanly and smoothly like Swiss clockwork precision. Each part of the frame is woven in the "Stargate" around the so-called positive core as a whole. More than 100 bobbins loaded with wafer-thin threads run through the braiding machine at breathtaking speeds to weave a seamless, flexible tube of carbon fibers in seconds. A certain similarity with a black stocking cannot be denied at this stage of production. Until now, braiding machine technology has primarily been known in the manufacture of steel cable such as that used for mountain railways or cable cars. In carbon processing, it is an absolute novelty. BMC calls its new technology Load Specific Weave (LWS). The high-tech braiding machine is used to weave varying degrees of material thickness and load distributions. The innovative method allows you to manufacture frame tubes made-to-measure for each individual section of the frame. After the weaving process is completed, the carbon fabric is soaked in the molds with epoxy resin and pre-cured in negative forms that give the carbon tubes their final shape.Uniform drying After shaping, the carbon tubes must be cured and dried for 15 to 120 minutes depending on the wall thickness and size. Even here nothing is left to chance. BINDER heating chambers of the FED series ensure a uniform drying climate at BMC at constant humidity and a temperature of 80 °C. They provide the best possible conditions for curing the epoxy resin. BINDER heating chambers are even used during final assembly and finishing of the frame sections. When drying and curing lacquers, lettering and assembly adhesives, BINDER heating chambers of the FED series play a supporting role. With a capacity of 53 to 400 l and possible temperatures of up to 300 °C, they are ideally suited for the wide range of requirements. And they do one thing particularly well: save energy. Thanks to their 60 mm insulating layer, BINDER heating chambers exhibit extremely low heat dissipation. Fleet-footed success The high quality products from BINDER seamlessly integrate into the world's first automated production process of carbon frames. In just four years, BMC developers have got the pioneering facility up and running. It has been worth it: An impec carbon frame from BMC only weighs about 1 kg on average. How successful the overall concept would be in practice in just a short period of time may have even surprised BMC a little. The Swiss BMC racing team around the world champion Cadel Evans was able to compete at the Tour de France on an impec for the first time ever in 2010.BINDER is the world’s leading specialist in Environmental simulation chambers, incubators and equipment for controlled preservation for scientific and industrial applications. BINDER offers a comprehensive range of products covering routine applications as well as highly specific tasks in the area of research and development, production and quality assurance.BINDER Central Services GmbH & Co. KG Marco Langnickel Im Mittleren Ösch 5 78532 Tuttlingen Tel.: +49(0)7462-2005-632 Marco.Langnickel@binder-world.com www.binder-world.com

12-09-2019 | Science & Education
BINDER GmbH
A new innovation from BINDER: The fail-safe function
BINDER incubators are the best on the market. Why is this? There is a simple answer in the first instance: Because they are constructed in as straightforward a way as possible, they are incredibly reliable. The risk of the cultures inside a BINDER incubator becoming contaminated is reduced to a minimum. But BINDER customers have high standards and want to know more about the details. This is exactly where the
07-30-2018 | Science & Education
BINDER GmbH
In safe hands with the GLP checklist
The "Good Laboratory Practice" regulatory mandate (GLP for short) was introduced in 1978 after the FDA (U.S. Food and Drug Administration) had already identified significant deficiencies in toxicological studies in the years preceding. The German Chemicals Act was introduced in an effort to ensure that newly approved drugs for human consumption really are safe and minimize any and all risks. The values of transparency, traceability, assignment of responsibilities, and safekeeping are
01-26-2017 | Industry, Real Estate & Constr …
BINDER GmbH
Cocoa beans hitting the spot
The USA-based company Seguine Cacao Cocoa & Chocolate Advisors carries out extensive research into studying and assessing cocoa beans and their flavors. Cocoa beans are his life: When it comes to evaluating the quality and flavor of cocoa beans and chocolate, Ed Seguine is the leading specialist in the field. Ed Seguine is the chairman of various international organizations of countries that produce and import cocoa and sits on several committees.
12-08-2016 | Industry, Real Estate & Constr …
BINDER GmbH
Energy storage device load tests
Stationary energy storage devices and electric vehicles of every type – from electric bikes to electric wheelbarrows – are in demand like never before. The manufacturers of components for the production of high-voltage batteries have been enjoying an ever-increasing level of demand and thus produce cells and modules which can later be integrated into the battery systems. The cells are interconnected in a cell network, resulting in a module; several