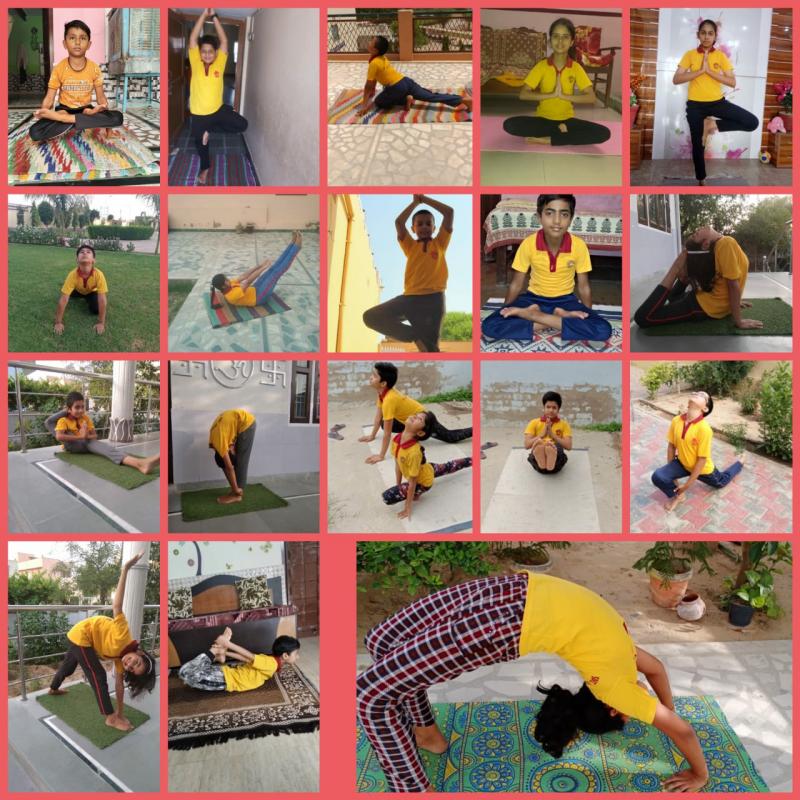 Derived from Sanskrit, the word Yoga means to join or to unite, symbolizing the union of body and consciousness and is an ancient physical, mental and spiritual practice that originated in India. The World Health Organization – WHO has appealed to all countries to help their citizens reduce physical inactivity, which is among the top ten leading causes of death worldwide, and a key risk factor for non-communicable diseases, such as cardiovascular diseases, cancer and diabetes.Yoga practiced in various forms across the world is much more than a physical activity. In the words of one of its most famous practitioners, the late B. K. S. Iyengar, “Yoga cultivates the ways of maintaining a balanced attitude in day-to-day life and endows skill in the performance of one’s actions. Recognizing its universal appeal, on 11 December 2014, the United Nations – UN proclaimed 21 June as the International Day of Yoga by resolution 69/131. The International Day of Yoga aims to raise awareness worldwide of the many benefits of practicing yoga. In the words of Prime Minister of India Sri Narendra Modi “Yoga is an invaluable gift from our ancient tradition. Yoga embodies unity of mind and body, thought and action ... a holistic approach [that] is valuable to our health and our well-being. Yoga is not just about exercise; it is a way to discover the sense of oneness with yourself, the world and the nature.”Popularly known as School with 100% results in Board Exams of Class 10 and 12, Jamuna Mishra Academy JMA is one of the most sought after schools in Pilani. It is a matter of great pride that alumni of JMA are presently pursuing higher education in various institutions which include NAAC A++ accredited Banasthali Vidyapith which in Times Higher Education 'THE' is Second Best Women's University in global rankings and the Institution of Eminence Birla Institute of Technology and Science - BITS Pilani. JMA Pilani has established a rich tradition of observing various days of international as well as national importance on a regular basis. Due to COVID-19, with schools closed and summer break activities cancelled, parents find it indeed challenging to keep their children physically active. UNICEF says kids can practice many yoga poses without any risk and get the same benefits that adults do. These benefits include increased flexibility and fitness, mindfulness and relaxation.With the theme as Yoga at Home and Yoga with Family, to mark the International Yoga Day, JMA Pilani Principal Mrs Booma Natarajan gave a clarion call to all students to do Surya Namaskar and practice various Yogasanas at home and send photos to the school. Parents appreciated the idea and ensured that their children did yoga practice at home, took photographs and sent them to school. Chairman JMA Dr Suman Mishra also greeted the students to mark the occasion.Principal also advised the students to strictly follow the dos and don’ts for watching the deepest' annular solar eclipse of this century, with the Sun appearing as a necklace of pearls. Since 21 June 2020 coincides with Father’s Day and Fete de la Musique - World Music Day, Principal requested the students to sing the favorite song of their dads!!. What emerges is the fact that corona Virus can confine the student at home but cannot prevent the unlimited enthusiasm.For more details about JMA Pilani see http://www.jmapilani.org/Default.aspxMrs Booma Natarajan, M.Sc., M.A., B.Ed. Principal, Jamuna Mishra Academy – JMA Near Old Pilani Post Office Pilani Rajasthan 333031 India Phone 91-1596-242314 Email booma_pilani at yahoo.co.in Website: http://www.jmapilani.org/Default.aspx FaceBook: https://www.facebook.com/JMAPilaniRajasthanRank1/About JMA Pilani: Jamuna Mishra Academy - JMA Pilani is a Co-educational English Medium School with Experienced Teachers, Spacious Classrooms and Modern Amenities designed to impart Quality Education combined with All Round Personality Development and lay the Best Foundation for the Child’s Future. While the school admits both boys and girls, the girl student enrollment has been steadily rising every year and is presently nearly 50% of the total strength. Right from its inception, JMA Pilani has embarked on a rich tradition of celebrating various days of national and international significance and festivals which makes it a cut above the rest schools in Pilani. The school has for boys and girls Scout and NCC, girls’ band which has been winning laurels every year. NCC cadets of JMA Pilani have also been selected for participation in Republic Day Camp RDC and Shivaji Trail Trek. Yoga, Karate, Painting and Music are not just part of school routine but a way of life for the students. It is a matter of great pride that JMA Pilani is referred popularly as the School with 100% Results on account of outstanding results year after year in Board of Secondary Education Rajasthan RBSE Class X and Class 12.

06-28-2018 | Business, Economy, Finances, B …
Apex Market Reports
Global Yoga Mat Market 2018 - Yogabum, Aerolite, Aurorae, Barefoot Yoga
Apex Market Reports, recently published a detailed market research study focused on the “Yoga Mat Market” across the global, regional and country level. The report provides 360° analysis of “Yoga Mat Market” from view of manufacturers, regions, product types and end industries. The research report analyses and provides the historical data along with current performance of the global PP Pipe industry, and estimates the future trend of Yoga Mat on
11-15-2017 | Health & Medicine
Yoga Nebula
Yoga Nebula Announces Yoga Event in Collaboration with OriginHathaYoga.com
Yoga event aims to highlight Yogic practices and attract new followers 13th November: On December 9th and 10th this year, New Jersey will host a yoga event organized by Yoga Nebula in collaboration with OriginHathaYoga.com. Yoga Nebula, a New York-based yoga facility will host the event. Yoga Nebula was founded by Samir Lal, who underwent extensive teacher training in Isha Yoga at the Isha Foundation in Coimbatore, India. The teachers
06-23-2017 | Leisure, Entertainment, Miscel …
Music Promotion Club
“Urban Yoga” by Marqesa is an Influencing Yoga Track
On the yoga day, the enthusiasts of yoga have been in for a pleasant surprise as Marqesa releases her new track – “Urban Yoga”. It is a new age track that aides in meditation and offers relaxation to those who listens to it. This song has the power and potential to change one’s perspectives and lives with profound music. The song creates a hypnotic environment with superbly relaxing music. Marqesa the
05-11-2017 | Tourism, Cars, Traffic
Yoga Retreat Guide
Yoga Retreats & Holidays
Come and visit the yoga retreat guide and find the yoga retreat that you have been waiting for. We offer a complete guide to the types of you styles that are around today. You can rest assured that you will find the right one for you. We have many different options for you to advertise your yoga retreat for a onetime fee that will ensure that you put your yoga retreat
02-20-2017 | Health & Medicine
Santhi Yoga
Yoga Teacher Training
Santhi Yoga Teacher Training Institute, a Registered Yoga school with Yoga Alliance offers 200 Hour Yoga Teacher Training, 300 Hour Yoga Teacher Training and Childrens Yoga Teacher Training Courses in Kerala, India. The main objective behind the foundation of this institute is to propagate the knowledge of yoga to people and make them benefitted by its techniques. Santhi Yoga's 200 hour Yoga Teacher Training, 300 Hour Yoga Teacher Training and
07-26-2016 | Health & Medicine
Win Vision Eye Hospitals
Can yoga worsen glaucoma?
Patients with glaucoma are encouraged to exercise and lead healthy and active lifestyle, but should avoid activities that increase the eye pressure and damage the optic nerve. Push-ups and heavy weight lifting are not advisable, so is certain yoga postures in which the head is facing downward. Previous studies have investigated only headstand position which showed a remarkable two-fold increase in eye pressure. However, a new research carried out at
Comments about openPR
9 o'clock: discuss press release with client, 10 o'clock: submit release to openPR, within the briefest possible time release is published and displayed in a prominent place on openPR.de. I am thrilled!
Zehra Spindler, Calypso Now! - Communication Agency