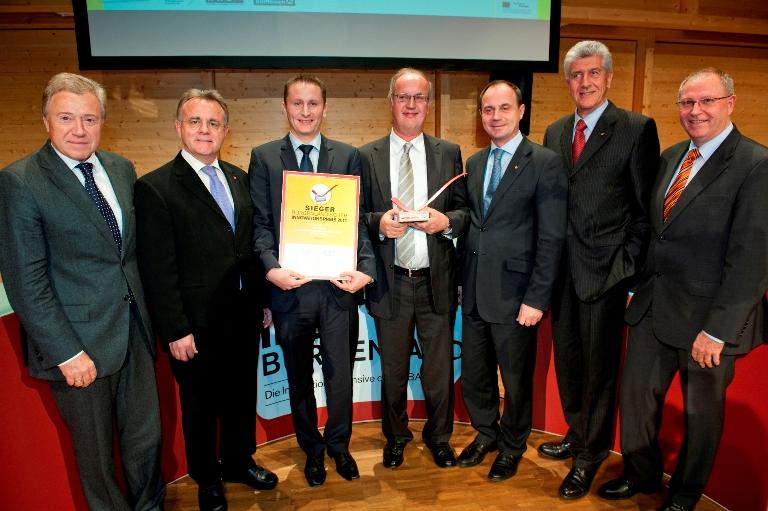 Burgenlands most creative companies were recently awarded with the "Innovationprize 2011" in the Liszt-Center in Raiding.at-visions came off as winner in the category small and medium sized business and will represent Burgenland at the austrians innovation state award later this year. Govenor Hans Niessl and Vice Govenor Mag. Franz Steindl handed over the prizes and congratulated the young model company for its innovative Hotel TV solution ONEvision. "Not Technology as an art pour l'art is our goal but innovation on behalf of our hotel customers and their guests. Getting credit on our way in various forms is a real pleasure for our team," comments Managing Director Roman Kirisits on the most recent accomplishment of his company.at-visions Informationstechnologie GmbH is a strongly expanding company which serves the international hospitality industry. at-visions offers a tailor-made Hotel TV system based on IP (ONEvision™), industry-sector specific digital signage solutions (ONEsignage™), HSIA services (ONEspeed™) and IT-consulting. at-visions main focus is the international first class and luxury hospitality industry. Customers of at-visions are for example Hyatt EMEA, Kempinski, Radisson, Hilton, Ramada, Sandy Lane, Empire Brunei and per aquum.Press contact:Sarah Breineder Marketing & Salesat-visions Informationstechnologie GmbH Industriegebiet 507/1 7412 Wolfau Austria http://www.at-visions.com contact@at-visions.com

11-01-2011 | IT, New Media & Software
at-visions Informationstechnologie GmbH
ONEvision is coming home to the Stanglwirt
„Feel at home in the Stanglwirt“ – This is what Austrian´s already know as the tradition of their most famous hotel. Stanglwirt is a unique combination of an ultra-modern 5-star Hotel, with a traditional guesthouse feel, and the highly productive 100 hectacre agricultural farm which supplies the needs of this cherished property. The Stanglwirt, with 175 rooms, is one of Austria´s most profitable 5-star Hotel ventures, currently handling over 40.000 arrivals
05-11-2011 | IT, New Media & Software
at-visions Informationstechnologie GmbH
at-visions is proud major sponsor for AHTEC@HOFEX
To deliver the Asian hospitality industry a direct vehicle for expert perspective on the evolving technology market, the industry renowned Hospitality Financial and Technology Professionals (HFTP®) launches its new conference - Asian Hospitality Technology Education Conference (AHTEC@HOFEX) at HOFEX on 12-13 May 2011. Held for 2 days, the event will attract an audience of approximately 150 senior decision-makers from hotels, resorts, clubs and other hospitality-related businesses keen to meet
04-21-2011 | IT, New Media & Software
at-visions Informationstechnologie GmbH
at-visions expansion follows on demand
Following the strong demand for modern in-room technology within the 4 and 5* Hotel Sector in China, at-visions expands further and is opening offices in Hong Kong and Shanghai. China is already a tremendous dynamic market – the estimated expansion rate within all touristic segments is on a constantly high level. The economic growth does not only affect the Tourism Sector permanently, the dynamic has an impact as well in
02-11-2011 | IT, New Media & Software
at-visions Informationstechnologie GmbH
The Empire Brunei selects ONEvision™ as their system of choice
The Empire Hotel and Country Club is situated beside the world's oldest rainforests in Borneo and it is truly one of the finest beaches, golf and spa resorts in the Asia Pacific Region. Catering to many royal and state visitors to Brunei, the hotel provides even the most discerning traveler a truly unique experience in a 180 hectare tropical garden estate. The hotel now features 518 spacious guestrooms; all with

01-30-2017 | Business, Economy, Finances, B …
maconda Corporate Development
maconda takes the floor and assists NORD Holding in the acquisition of a premium …
During the summer of 2016, maconda assisted the investor NORD Holding in its acquisition of Parador GmbH & Co. KG, a renowned manufacturer of various types of flooring located in Coesfeld close to Münster. Our extensive expertise with consumer goods and retail as well as our many years of experience in commercial due diligence consulting convinced NORD Holding to turn to maconda for help with this challenging project. Parador is a
06-20-2012 | Industry, Real Estate & Constr …
Melecs
MELECS EWS celebrates its 10th Anniversary
The largest independent Austrian EMS strengthens its commitment to the business location Austria Vienna, June 20th, 2012 – MELECS EWS, the largest independent Austrian EMS, celebrates its 10th anniversary this year. Additionally, MELECS won the largest order of its company history. To strengthen the strong market position and innovation, MELECS is investing massively in R&D. The MELECS Elektronikwerk Siegendorf (EWS) is part of the MELECS Group which started successfully in 2009 after
03-30-2010 | Arts & Culture
VernissageTV
VernissageTV's Studio Triath Nominated for the 2nd “Award for Marketing + Arch …
Basel, March 30, 2010 -- On April 23, 2010, at the KKL Luzern, Switzerland, the “Award for Marketing + Architecture” will be awarded for the second time. The Prize awards buildings that both ideally represent a brand and create identity. It recognizes to the same extend the achievement of the building owners, the marketing / branding specialists and the architects. Triath, the new studio of art tv channel VernissageTV, designed by
03-13-2008 | Arts & Culture
University of Vienna
Archaeological Sensation in Austria
Scientists from the University of Vienna unearth the earliest evidence of Jewish inhabitants in Austria Archaeologists from the Institute of Prehistory and Early History of the University of Vienna have found an amulet inscribed with a Jewish prayer in a Roman child's grave dating back to the 3rd century CE at a burial ground in the Austrian town of Halbturn. The 2.2-centimeter-long gold scroll represents the earliest sign of
Comments about openPR
I can't but agree to the positive statements about your portal: easy to use, clear layout, very good search function, and quick editing!
Jens O'Brien, Borgmeier Media Communication