The Empire Brunei selects ONEvision™ as their system of choice 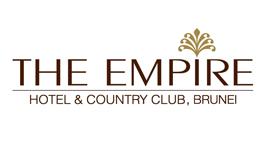 The Empire Hotel and Country Club is situated beside the world's oldest rainforests in Borneo and it is truly one of the finest beaches, golf and spa resorts in the Asia Pacific Region. Catering to many royal and state visitors to Brunei, the hotel provides even the most discerning traveler a truly unique experience in a 180 hectare tropical garden estate. The hotel now features 518 spacious guestrooms; all with balconies and superb views, providing every visitor with their own empire including large, marble bathrooms and breathtaking views. The exclusive E-Club with full concierge facilities is available for the executive traveler and the hotel has several well equipped function rooms for meeting events and catered parties. Be it bed linen, bath salts, dining choices, spa treatments or sporting activities, the Empire is fit for royalty; The addition of the ONEvision™ In-Room-Entertainment system was a logical choice to showcase all of the Empire's facilities and offer the latest in technology, content and presentation to its discerning clientele.The ONEvision™ interface with the Empire's Epitome PMS will allow advanced levels of interaction with the guest.at-visions Informationstechnologie GmbHat-visions Informationstechnologie GmbH | Industriegebiet 507/1/2 | A-7412 Wolfau T: +43 720 516200 | F: +43 720 516212 | contact@at-visions.com | www.at-visions.com

06-11-2020 | Leisure, Entertainment, Miscel …
Bonni3
Plug Star celebrates signing new Empire distribution artist Bonni3
Do you dream for a successful career in the music industry? I am sure you know all too well how important connections and exposure are in this field. Gabriel Comfort, or better known by her stage name Bonni3 is an upcoming music artist, entrepreneur and digital marketer who aspires to help music artists get noticed online. With a very successful journey her example can teach you how you can turn
09-06-2019 | Business, Economy, Finances, B …
Seeds Empire
Enjoy excellent strains of marijuana seeds from Seeds Empire
Canada 06.09.2019. Medical marijuana seeds are developed with some medicinal benefits in it. These seeds have some traits which help a person get rid of several serious ailments. Among the various types of cannabis or marijuana seeds grown like auto-flowering seeds, feminized seeds, medical seeds are different because they possess medical benefits. Seeds Empire produces medical seeds which are excellent remedial measures and people are taking up these kinds of
06-29-2011 | Fashion, Lifestyle, Trends
Human Empire Shop
International designers create for Human Empire
Human Empire, a Hamburg based design label, lauches a new t-shirt collection. The shirt desings are by international guest artists like Falko Ohlmer (D), Michael Willis (UK), Anton Weflö (S), Tim Lahan (US), Jim Stoten (UK), and Sergio Membrillas (E). All t-shirts are available at Human Empire Shop with immediate effect and, before long, in various streetwear shops all over Europe. Human Empire Shop runs an online shop and a small store
03-02-2010 | Sports
Articulon
Second Empire Grand-Prix Announces Two March Races
RALEIGH, N.C. (February 26, 2010)—The Second Empire Grand-Prix (secondempireseries.com) will include two March races as part of its spring series—the WakeMed Cary Distance Festival on March 6 and the Run for the Oaks 5K on March 13. Both races are USATF-sanctioned and will raise money for local North Carolina charities. Benefiting the Cary Rotary Club, the WakeMed Cary Distance Festival will start at 9 a.m. in front of the BB&T
08-05-2009 | Sports
Nomis Sports AG
EMPIRE OF SPORTS AND NOMIS ANNOUNCE PARTNERSHIP
Empire of Sports, the first virtual world entirely dedicated to sport, and NOMIS, the revolutionary football boot designer and manufacturer, have announced partnership. NOMIS, whose design marks arguably the biggest progression in football boot innovation for decades, will soon be able to demonstrate the amazing performances of its boots to Empire of Sports’ players. The first massively connected multisport 3D game, Empire of Sports is offering players to practice through their
03-12-2008 | Politics, Law & Society
Thompson & Knight LLP
Thompson & Knight Attorney Recognized as "Empire State Counsel"
The global law firm of Thompson & Knight LLP is pleased to congratulate Ira L. Herman for being honored as an “Empire State Counsel” by the New York State Bar Association (NYSBA). He joins a distinguished group honored for their outstanding contribution in providing legal services to the poor in 2007. The “Empire State Counsel” program was created in 2006 to give specific recognition to NYSBA members who provide 50
Comments about openPR
I can't but agree to the positive statements about your portal: easy to use, clear layout, very good search function, and quick editing!
Jens O'Brien, Borgmeier Media Communication