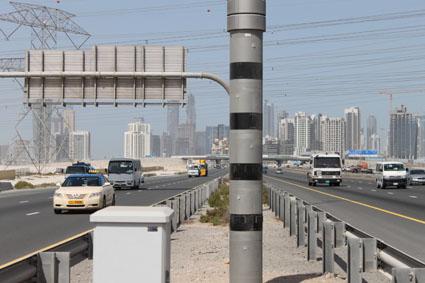 Wiesbaden, Germany / Dubai. Superior enforcement technology significantly contributes to more safety in road traffic. At this year’s Gulf Traffic from 12 to 14 December 2011 in Dubai the VITRONIC Group presents its latest generation of laser based traffic enforcement systems at booth 3F30: PoliScanspeed for fixed and mobile speed enforcement and PoliScanredlight for non-invasive control of red light offenses. PoliScanspeed is a LIDAR speed enforcement solution that is in use in many countries worldwide, among these numerous countries in the Middle East region. Successful speed enforcement with VITRONIC technology is conducted in Saudi Arabia, Qatar and the UAE. Altogether more than 220 PoliScanspeed systems are currently operating in the countries of the Gulf Cooperation Council (GCC). Most prominent users are the Dubai Police, the Abu Dhabi Police and Saudi Aramco. VITRONIC among nominees for Gulf Traffic AwardPoliScanspeed reaches highest enforcement rates and delivers unmatched numbers of cases per time. The system can operate even in challenging road traffic situations such as busy multi-lane roads, curves or road work areas. In-road equipment is not needed. Statistics prove that PoliScanspeed significantly reduces the number of traffic deaths and injuries and leads to an improvement in driver behavior. In Dubai, for example, the number of road deaths has dropped from 115 in the first eight months of 2010 to 84 in the same period this year, a decline of 27 percent. The advanced PoliScanspeed laser technology is one of the key factors which contributed to the reduction of fatal accidents in Dubai. This significantly supports the Dubai Police’s efforts in making the Emirate’s roads safer. VITRONIC is therefore among the nominees for the Gulf Traffic Award in the category “Changing Driver Behavior”. Non-invasive laser-based red light enforcementPoliScanredlight is one of the leading and most innovative solutions for non-invasive red light enforcement on a global scale. When traffic lights change to red, PoliScanredlight automatically monitors the stop lines of the intersection with an invisible laser scanner. Whenever a violation occurs, PoliScanredlight takes two pictures of the offense: The first as soon as the vehicle crosses the stop line, the second one in the intersection. The system can be combined with speed enforcement to PoliScanred+speed. Whether speed or red light enforcement, both systems capture vehicles even if they tailgate or change lanes. The combined red light and speed enforcement system allows permanent speed control in every traffic light phase. VITRONIC’s red light enforcement system has received type approval from the Federal German state authority PTB, guarantor of quality.License plate reading with color recognition and classificationMoreover, at Gulf Traffic VITRONIC will present PoliScansurveillance as a high-end solution for automated license plate recognition (ALPR). Even at high speeds this solution offers maximum read rates. On top of its ALPR functionality PoliScansurveillance is capable of identifying colors on license plates and of classifying vehicles. Gulf Traffic, 12-14 December: Meet us at booth 3F30Since its foundation in 1984, VITRONIC GmbH, headquartered in Wiesbaden, Germany, offers machine vision systems in three main areas: industrial automation, logistics and traffic technology. The product range spans from standardized to individually customized solutions. All products are developed and produced in-house by VITRONIC. VITRONIC's core competence in the field of traffic technology is the enforcement of vehicles in free-flowing traffic. State and local authorities as well as private service providers use VITRONIC products for increased safety. Tolling system operators use these technologies for automating toll collection and enforcement. The company is the among the world's leading industrial machine vision companies and has a workforce of about 400 in five continents. VITRONIC products are currently in use in 40 countries.VITRONIC Dr.-Ing Stein Bildverarbeitungssysteme GmbH Hasengartenstr. 14 65189 Wiesbaden Germany www.vitronic.comJulia Stolle +49 (0)611-7152-0

06-04-2018 | Business, Economy, Finances, B …
Gulf Craft
Gulf Craft Strengthens Their Team for Growth
Gulf Craft has appointed Gregory Yeakle to be their new Chief Executive Officer. One of the world’s largest luxury ship builders, Gulf Craft is based in the United Arab Emirates. The group has grown into a leading global business over the course of the past 37 years. He succeeds Erwin Bamps who held the position for the past 4 years and has now moved on to a new role as
01-03-2018 | Business, Economy, Finances, B …
Gulf Craft
Gulf Craft to Attend Inaugural Phuket Rendezvous
Gulf Craft will start 2018 in style in Thailand at the new luxury lifestyle event Phuket Rendezvous from January 4 to 7, 2018. “Thailand is an increasingly important market for several reasons,” said Tony Nixey, Managing Director of Gulf Craft’s dealer in the country, Go Boating Thailand. “Not only is it popular with the global yachting community, who sail from all over the world to explore its resorts and islands, it is
02-20-2017 | Tourism, Cars, Traffic
Aqua Resort
Dream & Discover Aqua-Gulf
Date: 21-02-2017 to 28-02-2017 Address: 15625 Front Beach Road, Panama City Beach, Florida, 32413 Email: info@aqua-gulf.com It's a perfect time to mark out the Resort like a place, one of the best vocational spot. What would be the perfect resort for you to end the vacations? Here the name comes “Aqua-Gulf”, one of the best tourist places with extraordinary views situated between the beautiful gulf shores. It is the one of the beautiful platform
12-27-2016 | Tourism, Cars, Traffic
Aqua Resort
Get Your Bags Packed For Aqua Gulf
Date: 25-12-2016 To 31-12-2016 Website: www.aqua-gulf.com Email: info@aqua-gulf.com Phone Number: (855) 858-6954 Address: Front Beach Road, Panama City Beach, Florida 32413 Celebrating your holidays with full of enjoyment and with complete recreation is the perfect way of ending your leisure time with your family members. You can find out the perfect location to have the wonderful flashes of memories at the beautiful Panama City Beach which can be found in the Gulf of Mexico. It
05-17-2016 | Sports
EZFlex Sports Mats
Newbreed Gulf Coast Classic
Preregistration is now closed. You can still register at the door on either Friday between 5 pm - 7 pm or on Saturday. The doors open at 8 am and the youth and teen competitors must be registered and weighed in by 9 am. Please see the TOURNAMENT SCHEDULE link below. Registration at the door is $99.00. Two divisions are included. Spectator fee is $15.00. There are 2 ways to register for this
10-10-2012 | Leisure, Entertainment, Miscel …
REUTHER-ENTERTAINMENTS GmbH + Co. KG
Gulf Bike Week in Dubai
Reuthers presents Harley-Davidson dream trips to the land of Arabian Nights. Dubai makes you think of skyscrapers in Dubai-City. Yet the small peninsula in the Persian Gulf has far more to offer than its Skyline and the famous Emirates Tower (of which the higher one is more than 354 meters high). Dubai – is also the deep blue gulf and the never ending desert. Here you will find spice markets, which
Comments about openPR
9 o'clock: discuss press release with client, 10 o'clock: submit release to openPR, within the briefest possible time release is published and displayed in a prominent place on openPR.de. I am thrilled!
Zehra Spindler, Calypso Now! - Communication Agency