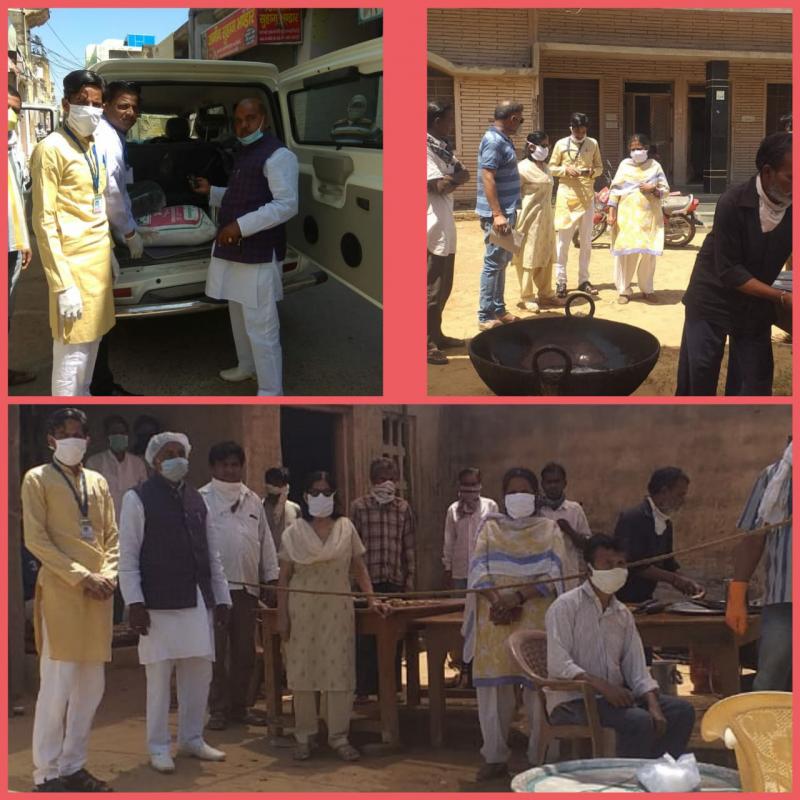 When Indian Government took decision to declare nationwide Lockdown to fight Corona Virus menace, national and international media screamed that no work will lead to no food for millions. Considering that 380 million people in India which is more than the population of USA are employed in the informal sector, the situation indeed assumes grim dimensions. According to the World Bank's 2015 estimates, India has 176 million people living in extreme poverty who earn less than INR 150 a day. Pilani hometown to Birlas has a sizeable number of daily wage workers and the announcement of lockdown was a thunderbolt throwing their survival at stake. However Pilani has a lot of good Samaritans and one such is Sri Hiralalji Naik a highly respected and well known social worker who is also presently Chairman of Pilani Nagarpalika. Without any delay, he announced the launching of what has come to be known as Hiralalji ka Rsaoi in Shekhawati Region for feeding 1000 people daily.Popularly known as School with 100% results in Board Exams of Class 10 and 12, Jamuna Mishra Academy is well known in Pilani for coming forward always to carry out social engineering activities. It is a matter of great pride that alumni of JMA Pilani are presently pursuing higher education in various institutions which include NAAC A++ accredited Banasthali Vidyapith which in Times Higher Education 'THE' is Second Best Women's University in global rankings and the Institute of Eminence BITS Pilani.JMA Pilani has played a stellar role for distribution of sanitizers, handmade masks, provisions for 100 families in the past couple of days. On 08 Apr 2020 which also happens to be Hanuman Jayanti, team JMA Pilani led by Dr Suman Mishra Chairman, Principal Mrs Booma Natarajan and Hindi teacher Sri Mahendra Kumar handed over 100 Kg Atta, 15 Litre Tin of Refined oil and 50 Kg Potatoes to Sri Hiralalji naik for carrying on the Rasoi Mission with Passion. Sri Hiralalji said that a team of volunteers work daily from 8 Am to 2 Pm to prepare Puri and Sabji for distribution to 1000 people. When asked if he knows the names of the 1000 persons receiving food, Sri Hirlalji said that God is known by 1000 names Sahasranam and in each of the 1000 persons he saw God and not their names. The country indeed needs more Hiralal Naiks and institutions like JMA Pilani to face any challenge.For more details about JMA Pilani see http://www.jmapilani.org/Default.aspxMrs Booma Natarajan, M.Sc., M.A., B.Ed. Principal, Jamuna Mishra Academy - JMA Near Old Pilani Post Office Pilani Rajasthan 333031 India Phone 91-1596-242314 Email booma_pilani at yahoo.co.in Website: http://www.jmapilani.org/Default.aspx FaceBook: https://www.facebook.com/JMAPilaniRajasthanRank1/About JMA Pilani: Jamuna Mishra Academy - JMA Pilani is a Co-educational English Medium School with Experienced Teachers, Spacious Classrooms and Modern Amenities designed to impart Quality Education combined with All Round Personality Development and lay the Best Foundation for the Child's Future. While the school admits both boys and girls, the girl student enrollment has been steadily rising every year and is presently nearly 50% of the total strength. Right from its inception, JMA Pilani has embarked on a rich tradition of celebrating various days of national and international significance and festivals which makes it a cut above the rest schools in Pilani. The school has for boys and girls Scout and NCC, girls' band which has been winning laurels every year. NCC cadets of JMA Pilani have also been selected for participation in Republic Day Camp RDC and Shivaji Trail Trek. Yoga, Karate, Painting and Music are not just part of school routine but a way of life for the students. It is a matter of great pride that JMA Pilani is referred popularly as the School with 100% Results on account of outstanding results year after year in Board of Secondary Education Rajasthan RBSE Class X and Class 12.

01-12-2021 | Science & Education
Lakshya International School
International School in Kakinada | Lakshya School
If you are searching for best school to give a right future for your child then visit Lakshya International School in Kakinada which is having both International Primary Curriculum and CBSE Curriculum Lakshya, is a highly progressive and enterprising international school committed to provide quality education with great emphasis on traditional values. This progressive thinking has led to progressive teaching methods and has brought about a tremendous change in how our
02-21-2020 | Industry, Real Estate & Constr …
ReportsnReports
School Bus Market
A Discount (20%) can be asked before order a copy of School Bus Market Report at https://www.reportsnreports.com/contacts/discount.aspx?name=2939701 The research study on Global School Bus Market organizes the overall perspective of the industry. This incorporates upcoming flow of the School Bus Market together with an extensive analysis of recent industry statistics. It describes the School Bus market size as well as factors controlling market growth. Likewise, the report explains various challenges
08-08-2018 | Advertising, Media Consulting, …
IDIGITALS
School In Vapi - Laxmi Vidyapeeth School Vapi
Choosing a right school for your child is the first step towards their education. A school which teaches important social lessons of life to children is important in this age. Not just for education, a school also helps in the interaction between students of different social and financial background. Nowadays, with the options available it is really very bewildering for parents to choose the best. Good results are not the only
05-15-2017 | Science & Education
EduHappy
EduHappy School Management Software
Nowadays, schools; whether K-12, preschools, Primary, Elementary, High Schools, or even the universities and colleges are having an increasing demand to streamline the learning process while managing the school enterprise resources in an optimum way. School Management Software in our point of view has to integrate three major systems in order to provide the school what it needs from building the school infrastructure in the system to administer the whole school
08-12-2016 | Science & Education
EdProcure
The school procurement process
Schools, like all public sector bodies and larger private sector organisations, conduct their procurement according to budgets. These budgets are set at the top of the organisation’s tree and filtered down to the budget holders who have been given the responsibility to spend this money. Spend being the operative word. School procurement is a little bit like a communist society – spend it or lose it.
09-19-2011 | Science & Education
Gonarezhou Transfrontier Park
School opening ceremony
The development of a new elementary school in Mavue was officially completed on August 11th, 2011. A community meeting was organized in light of this occasion, which had the representatives of the Gonarezhou Transfrontier Park meet with the village chief, representatives of the Gaza Province, representatives of the political party Frelimo, representatives of the border police and local residents. Local residents were very excited seeing the new school and are convinced that
Comments about openPR
Your portal is fast, simple, and easy to use. Others may have more functions but they also demand more editing time, you have to preformat the text in order to achieve a good result etc. I think openPR is really fantastic!
Andreas Knepper, wallmedien AG