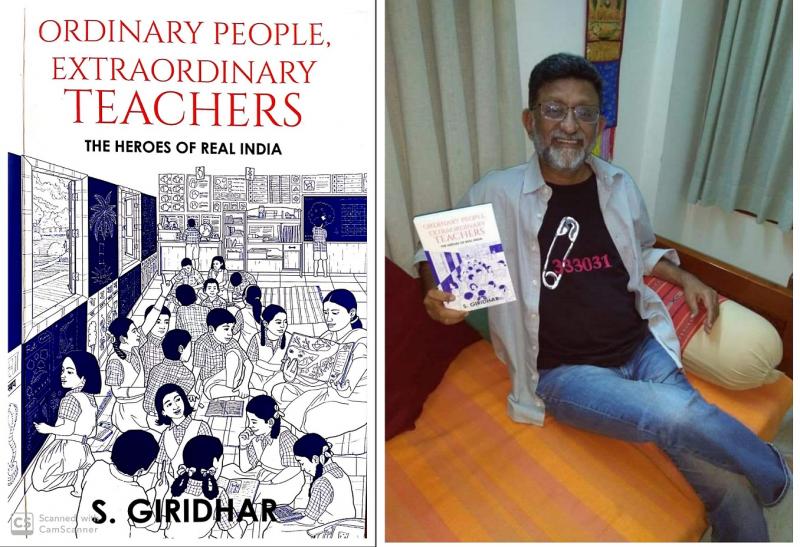 The author Giridhar "Giri" who is an alumnus of institution of eminence Birla Institute of Technology and Science BITS Pilani 1973 - 1978 MSc (Hons) Chemistry is presently Registrar and Chief Operating Officer at name to reckon with Azim Premji University, Bangalore. Giri firmly believes that to bring about Education for Social Change, what India today need is teachers who are awakeners. One is reminded of the quote from Indian Philosopher Jiddu Krishnamurti regarded globally as one of greatest thinkers & teachers, "Education can be transformed only by educating the educator, and not merely creating a new pattern, a new system of action."Giridhar writes regularly drawing upon his experiences in the education sector and these essays have been published in the Wall Street Journal, Indian Express, the Hindu, FirstPost.com and Seminar magazine. He played inter-school and city cricket tournaments. He played his best cricket in his late thirties at Bangalore tournaments and lower league matches bowling leg spin, batting stodgily and fielding with agility and wishes he had played like that in his younger days. Chandar Natarajan a fellow BITSian from Giri's college days fondly recall his phenomenal knowledge about cricket statistics and passionate running commentary from Ram Bhawan Hostel roof top for matches held in the lush green central lawns facing the iconic BITS Tower. Passion for cricket resulted in Giri co authoring with VJ Raghunath two books Mid Wicket Tales: From Trumper to Tendulkar and From Mumbai to Durban: India's Greatest Tests. The books have had reviews from Wisden India and cricketing greats Rahul Dravid, Matthew Hayden, Mike Hussey, Javagal Srinath, EAS Prasanna, VVS Laxman, S Venkataraghavan etal which speak volume about the quality of the books. From 2002, Giridhar's role in Azim Premji Foundation took him to schools across the nation covering Karnataka, Rajasthan, Gujarat, Uttarakhand and Madhya Pradesh where the foundation was partnering with respective state education departments to contribute to improving the quality of government schools resulting in establishment of network of Voluntary Teacher Forums - VTFs and Teaching Learning Centres - TLCs. Giri was angered by popular media thriving in making noise about a dysfunctional government school system highlighting a mishap in midday meals, the truant school teacher who runs a grocery shop or who misspells the days of the week which are considered more newsworthy than the stories of teachers who are doing stellar work in anonymity. From a pool of around six hundred schools where a teacher or head teacher was doing exemplary work, Giri selected one hundred and ten. Starting March 2017 until November 2018, he visited these schools in Uttarkashi and Udham Singh Nagar in Uttarakhand, Sirohi and Tonk in Rajasthan, and Yadgir in Karnataka. The result is Giri's must read delightful as well as serious book which renews the hopes of a billion Indians for the future of their children studying in millions of government primary and secondary schools.Giri has engineered in his book a series of stories that the readers can choose to read in any order they wish. What connects the stories from Hemmadagi in Karnataka to Gangani in Uttarakhand is the proud refrain of the teachers, 'Idhu bari sarkari kelsa alla' or 'Yeh sarkari naukri nahi hai,' (this is not just a government job) thereby conveying the true meaning of government service in the trenches. The book points out the importance and enormous scale of work yet to be done in motivating, enabling and helping teachers in these schools. The book highlights five aspects of the exemplar teachers covered by the author- head master as the CEO, reflective practice, concern for delivering equity and quality, teamwork and heroic efforts to break all barriers. Each chapter is full of authentic case studies with rich local flavour hard to capture in a review. Unlike typical case research, it covers hundreds of teachers over long years of contact and institutional involvement with these schools. 'The last Word' by the CEO of the Foundation emphasizes why this story needs to be told. Otherwise, we tend to read only pessimistic, unappreciative stories about such schools in the main stream media and publications. Reviewer R.Rajagopalan who is also a well known alumnus of BITS Pilani from Bangalore says "I am a product of the kinds of primary and secondary schools discussed in this book. As a retired academic, I consider teaching in primary schools the most challenging and meaningful profession. For, one is required to shape and mold young minds and bodies- with very limited physical infrastructure, academic support and the poverty of bulk of the students. But since when one gets his hands on a book on teachers in government schools which reads like racy thriller?" The bollywood film Super 30 with Hrithik Roshan highlighted just one teacher Anandkumar who coaches for IIT admissions and made some noise in box office. However, Giri is not the one to remain silent as the nation at large has many more teachers who are the real heroes. The result is his latest book "Ordinary People, Extraordinary Teachers: The Heroes of Real India" published by Westland ISNB-10: 9388754859 and is available in Amazon. https://www.amazon.in/Ordinary-People-Extraordinary-Teachers-Heroes/dp/9388754859S. Giridhar Chief Operating Officer Azim Premji University PES Campus, Pixel Park, B Block Electronics City, Hosur Road (Beside NICE Road) Bengaluru - 560100 India giri@azimpremjifoundation.orgPilani Chronicle covers news about happenings in Pilani, achievements of Proud to be BITSians who are alumni from institution of eminence BITS Pilani.

08-12-2020 | Arts & Culture
Pilani Chronicle
BITSAA Chennai Rocks BITSian Day Celebrations with Unforgettable Music Nite
Proud to be BITSians who are alumni of Institution of Eminence in India today BITS Pilani firmly believe that music can bond irrespective of who you are, what you are and where you are. It’s a source of entertainment as well as platform to put across past, present but also future messages. Music is undoubtedly a factor that binds the world together irrespective of the cultural diversities and is the
07-24-2020 | Health & Medicine
Pilani Chronicle
Top Ranking BITS Pilani Optometry Alumnus Dr Rajeswari Mahadevan Contact Lens Sp …
Many people in India today who think that the institution of eminence Birla Institute of Technology and Science is a T School, S school, P School, B school and what not need to be reminded that it had been an Opto O school too for two decades. Rajeswari Mahadevan fondly called as Raji born 09 Sep 1976 holds not one or two but three degrees BS (opto),
07-03-2020 | Leisure, Entertainment, Miscel …
Pilani Chronicle
MYZ-UNO First & Biggest Micro-Brewery of AP Mission with Passion of BITS Pilani …
Driven by innovation, the Indian alcoholic beverage industry is witnessing bubbling times. One of the fastest growing, India is the third largest global spirits market by volume in the world, just behind China and Russia. In recent times, the demand for fresh brews, bottled craft or canned craft beer and craft spirits has indeed seen a steep increase. The Indian liquor industry includes the IMFL - Indian Made Foreign Liquor,
06-19-2020 | Politics, Law & Society
Pilani Chronicle
Distinguished Alumnus of BITS Pilani Mathew Cherian CEO HelpAge India authors Bo …
It is known that HelpAge India is a leading charitable organization working with and for older people in India for the past 42 years. It runs healthcare, age care and livelihood programs throughout the country & advocates strongly for the cause of the elderly and fights for their rights. HelpAge also advises & facilitates the Government in formation of policy related to the elderly. In disaster situations, it looks not

01-05-2021 | Leisure, Entertainment, Miscel …
28 Woman
“Quest for Steel”, Emanuele Marrocco’s soundtrack for the fantasy film dir …
“Quest for Steel” will be released on January 15, 2021, premiering on on-demand platform VOD. The film was directed and produced by Simon Roptell and features young musician Emanuele Marrocco in the cast of composers. A journey into the brutal world of the Bronze Age through the eyes of Tegra, a young warrior in search of the first steel sword that the earth has ever seen. In the background to
05-29-2019 | Health & Medicine
https:threebestrated.in
Dr. Pramod Giri MBBS, MS, M.CH - Named One Of The Best
Operating on the different organs of the human body is a big challenge for every doctor and Dr. Pramod Giri faces this challenge with every surgery. He was recognized for his excellence and was named one of the top three neurosurgeons in Nagpur, Maharashtra by Three Best Rated® for 2019. He faced a rigorous 50-point inspection by Three Best Rated® in order to receive this award. Dr. Pramod Giri has
05-03-2019 | Health & Medicine
Up Market Research (UMR)
Caloric Sweeteners Market 2019 | World Market Analysis 2025 | Market Leaders – …
As per the latest research study published by Up Market Research, “Global Caloric Sweeteners Market” is estimated to grow at a healthy CAGR % in the coming years. The research report showcases qualitative and quantitative estimations by the industry analysts. The report documents first-hand data, post verification from the industry experts along with each industry manufacturers by the market valuation. Caloric Sweeteners Market report also gives an extensive analysis of
03-08-2019 | Health & Medicine
Global Info Reports
Caloric Sweeteners: Market 2019 Huge Demand by Globally with Top Key Player – …
Caloric Sweeteners Market report aims to provide a complete 360-degree view of the market in terms of cutting-edge technology, key developments, drivers, restraints and future trends with impact analysis of these trends on the Market for short-term, mid-term and long-term during the forecast period. Further, the Caloric Sweeteners Market report also covers key players profiling with detailed SWOT analysis, financial facts and key developments of products/service from the past three
02-08-2019 | Fashion, Lifestyle, Trends
Up Market Research (UMR)
Caloric Sweeteners Market Report 2019-2025 Global Analysis By Key Players Like - …
UpMarketResearch published an exclusive report on “Caloric Sweeteners market” delivering key insights and providing a competitive advantage to clients through a detailed report. The report contains 104 pages that focuses on current market analysis scenario, upcoming as well as future opportunities, revenue growth, pricing and profitability. The report categorizes the market based on manufacturers, regions, type, segments and application. Get Free Exclusive PDF Sample Copy of This Report @ https://www.upmarketresearch.com/home/requested_sample/53780 Caloric
01-16-2019 | Business, Economy, Finances, B …
Supply Demand Market Research
Caloric Sweeteners Market 2019 Analysis - Top 10 Players Size and Share Covers F …
The Global Caloric Sweeteners Market status and forecast, categorizes the global Caloric Sweeteners market size (value & volume) by manufacturers, type, application, and region. This report focuses on the top manufacturers in North America, Europe, Japan, China, and other regions (India, Southeast Asia). The major manufacturers covered in this report Danisco A/S Fraken Biochem Co., Ltd Forbest International Usa, Llc Giri Health Product Glg Life Tech Corporation Golden Time Enterprise (Shenzhen) Co. Ltd. Haitong Chemical International Trading Co.,
Comments about openPR
9 o'clock: discuss press release with client, 10 o'clock: submit release to openPR, within the briefest possible time release is published and displayed in a prominent place on openPR.de. I am thrilled!
Zehra Spindler, Calypso Now! - Communication Agency