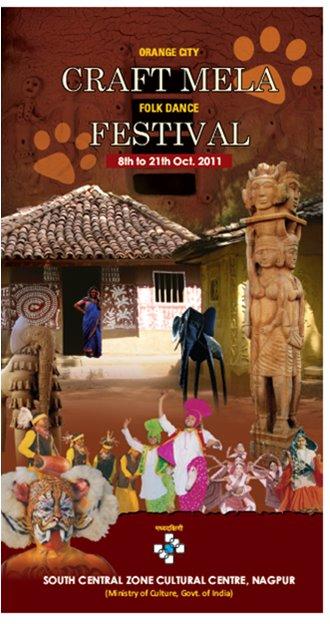 SEZCC, Nagpur, is one of the seven Zonal Cultural Centres, established in India in the year 1986 with its headquarters at Nagpur to preserve, promote and proliferate the cultural heritage and legacy of our Country. It constitutes and caters to the linguistically different states namely Andhra Pradesh, Karnataka, Madhya Pradesh, Maharashtra and Chhattisgarh. These defining States under its functional purview are rich in traditional practices and participation of folk, tribal, fine arts and crafts. The Centre strives to foster, promote and strengthen these traditions in different and variegated forms. The Centre functions under the control of Ministry of Culture, Government of India.

On this occasion The director of SEZCC addresses guests and media personnel:

H.E. Hon. Governor of Maharashtra State Shri K. Sankaranarayanan and the distinguished dignitaries on the dias. All my dear colleagues and most of all the esteemed people of Nagpur. It is a great honour today to welcome our honourable Governor to the South Central Zone Cultural Centre. In his capacity as Chairman of the Governing Council of the zone he has provided us with great inspiration and guidance for the Centre under his guidance the Centre has not only accomplished the purpose of its existence but has also excelled in nurturing the various art forms which are flourishing in the 5 member States. I most proudly state that this year is the Silver Jubilee year for the establishment of the Centre and hence we have decided to work on each programme with a theme, of course our focus is to reach the grass route level and identify the artists and artisans and alsomasters in all fields of culture.

In the last 25 years has been Since last 24 years the Centre is organizing All India Art Contest annually which can be termed as only art contest conducted at a Zonal Cultural level.

Since 1994 onwards the Centre has been awarded 5 First Awards and 2 Third Awards for the best Zonal Cultural Centre performing at Rajpath at New Delhi with Children Contingent focusing tribal and folk dances of the participating States.

The Orange City Craft Mela also held annually has become a milestone for Nagpurians, a mega-event for which the entire region awaits anxiously.

The Centre has been implementing Guru Shishya Parampara Scheme for promotion of dying and rare art forms that can be passed only from guru to young disciples.

The Centre has been providing platform Young Talented Artists in all disciplines such as Tribal & Folk dance, Theatre, Painting and Craft to through various workshops, competitions & sending them to various national & international event.

The Centre has so far documented 33 dying art forms in print media and audio, visual media.

During the start of the Silver Jubilee year I feel highly honoured to have our Web-site inaugurated at the hands of our Chief Patron His Excellency the Governor of Maharashtra.

Today’s festival “HOLI KE RANG” is being organized in honour of H.E. where all of us are going to witness great oral tradition and rich heritage of Folk Dances from the programme presentation. This cultural heritage is the gift our mother land has given to us to share it together and again to pursuer & pass it to the coming generations.

In this jubilee year, me & my team solemnly promise to all you esteemed guests that under the able guidance of H.E. we will take South Central Zone Cultural Centre, Nagpur to new heights & its repute shall …………. .. of our level & go to international arena.

This year the Director of the Centre Ravinder Kumar Singal, has roped in for participation of nearly 120 artisans in the field of wood carving, metal casting, terracotta and loha shilp. These artisans were exclusively engaged in raising and creation of artistic images, articles, structures and sculpture to reflect and demonstrate the traditional environment unraveling the ethnic culture of the participating states for the connoisseur of art, to be premier in Nagpur city.

The environment fostered in an around the campus induced applauding response from all the art lovers and endeared cultural waves, motivating most of the visitors to capture the scenic art and beauty in their lenses. This in turn provides them to carry message to others on the creative displays and attributes of the Centre.

This festival has emerged to be a National platform for the artisans for the sale of their handicraft items and even for the folk/ tribal artists rendering their art forms in presence of large audience, art lovers including the Media fraternity.

02-04-2019 | Health & Medicine
Sydney CBD Medical Centre
Sydney CBD Medical Centre
Our mission is to provide the highest standard care to you and your family. We are committed to promote well being and disease prevention. We pride ourselves on our services and our doctors are continually pursuing excellence in medicine and surgery through their work and study. This is a fully accredited medical centre under the standards set by the Royal Australian College of General Practitioners and also NSW Health Dept
06-19-2018 | Health & Medicine
Dartford Road Dental Centre
Dartford Road Dental Centre
Dartford Road Dental Centre – dentist in Dartford Dartford Road Dental Centre is a dentist in the heart of Dartford and provides great dental care to patients from Dartford and the surrounding area. The dental practice opened in the 1980s and prides itself on providing award-winning dental care at affordable prices. The aim of Dartford Road Dental Centre is to provide good quality, up to date dental care in a caring and
12-18-2017 | IT, New Media & Software
contactSPACE
Incentivising Contact Centre Teams
The establishment of incentives is an important process for every contact centre, and the KPI’s are typically aligned with the overall corporate strategy and mission. How KPI’s are set, will in part be determined by the type of contact centre i.e. sales, service or support, and the indicators will consider customer satisfaction, operational efficiency, sales, and agent quality for example. Choosing the measurements for success and the subsequent rewards also
10-23-2017 | Health & Medicine
Smilecare Dental Centre
Smilecare Dental Centre
The Smilecare Dental Centre in Crawley has been established since 1961. In fact, the practice was one of the first purpose-built dental centres in the UK. There have been many upgrades to the facilities since then, and this has culminated into the modern, inviting and high-tech facilities and environment that we see in the practice today. They are very much seen as a family dentist and have been looking after people’s
08-11-2016 | Business, Economy, Finances, B …
Assignment Help
Viva Business centre Assignment
Viva Ball Centre, which is a sport convention that provides football pitches available for hire for both adults and juniors on an hourly basis and available 17 hours daily 7 days a week, the prices will be between 25-55£ per hour depends on the time slots chosen (higher prices will be in weekends, peak hours). The centre will provide six 6-a side pitches. The pitches are equal and located
03-22-2012 | Health & Medicine
Otto Bock HealthCare GmbH
Centre for Healthcare Technology
Opening with Premier McAllister The ZHT Centre for Healthcare Technology of the PFH Private University of Göttingen combines orthopaedic expertise with scientific competence. It is a unique facility in the world and its goal is to raise the quality of patient care to a new level. The facility was officially opened on Monday, March 19, 2012, by the President of the PFH, Professor Dr. Bernt Sierke. Premier of Lower Saxony David McAllister,
Comments about openPR
9 o'clock: discuss press release with client, 10 o'clock: submit release to openPR, within the briefest possible time release is published and displayed in a prominent place on openPR.de. I am thrilled!
Zehra Spindler, Calypso Now! - Communication Agency