Press release from: Hamm For Senate 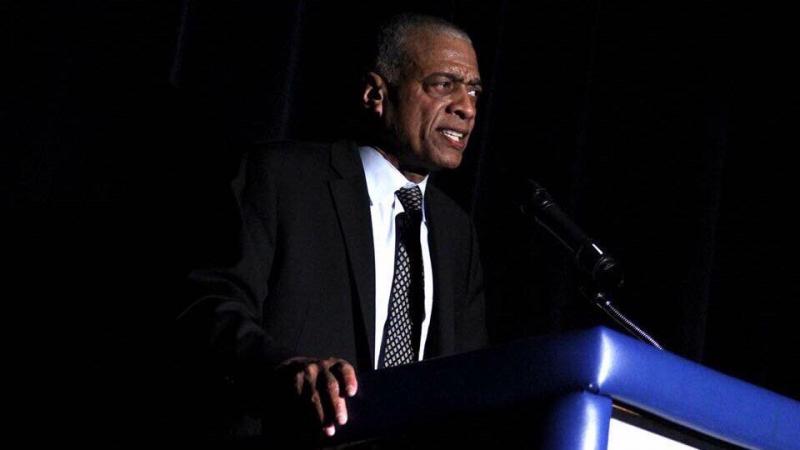 NEWARK, NJ: Lawrence Hamm, Founder and Chairman of the People's Organization for Progress (POP), Chairman of New Jersey For Bernie 2020 and longtime activist, will be delivering a stack of petitions with over 2500 signatures to the NJ Division of Elections today, March 16, in order to cement his position on the ballot for U.S. Senate during the June 2 Primary. It has been an exciting three months for his grassroots campaign, as over 100 volunteers signed on to help get Hamm's name on the NJ ballot. Although the deadline to submit petitions is March 30, Hamm decided to collect his documents early due to the unknown impact that the Coronavirus will have on everyday life in the state. Many volunteers were able to drop off their signatures on March 14, and more are still expected to come in, which could increase the count well over 4,000. Hamm, a progressive, is aligned with Senator Bernie Sanders and supports many of Sanders' positions like, Medicare for All, Paid Sick Leave, Green New Deal, and universal child care and pre-K. "I'm a radical, but one who wants radical change in the condition of people in this country," he told Patch. "There's a greater gap between rich and the poor - or actually, the rich and the rest of us - in human history." "I'm trying to bring the programmatic ideas of Dr. Martin Luther King Jr. into the public policy arena," Hamm continued. "We need a fundamental restructuring of our social system in this country. Rather than just have programs that feed the hungry, we need to reshape an economic system that produces hungry people." About Lawrence Hamm: He is Chairman of New Jersey For Bernie 2020 and Co-Founder and Chairman of the People's Organization for Progress. He has been a voice for civil rights since high school, when he became the youngest Board of Education member in the US, at 17. He can be reached by email at Info@hammforsenate.org or you can contact his campaign co-manager Justen Dillard at 973-370-4449. His website is www.https://hammforsenate.org/ ###Committee to Elect Lawrence Hamm Justen Dillard/Nikki Kurzynowski P.O. Box 25414 Newark, NJ 07101 973 - 370 - 4449Lawrence Hamm has been a relentless advocate for African-Americans and the cause of human rights and civil rights for all oppressed people for more than 48 years. Raised in Newark New Jersey, he attended public schools and emerged at age 17 as a forceful and articulate spokesperson for the educational needs and aspirations of Newark students and the community. He was appointed to the Newark Board of Education, making him at that time the youngest voting school board member in the United States.

05-02-2017 | Health & Medicine
Lawrence Finn
Dr. Lawrence Finn Offers Root Canals
WARREN, MI – Dr. Lawrence Finn (http://www.dr-finn.com), is offering root canals, a procedure that repairs and saves a badly damaged or infected tooth, rather than extracting it. When the pulp, the tissue inside the tooth, becomes inflamed or infected, a root canal (also known as an endodontic treatment) is performed. A root canal procedure is done to repair and save the infected tooth. Without this treatment, the tooth may have to
04-10-2014 | Arts & Culture
EMMANUEL POST
Exhibition LAWRENCE POWER / Paintings
Opening reception: Friday, April 11, 2014, 7 pm Duration of the exhibition: April 12 - May 24, 2014 Tuesday - Saturday, 12 - 7 pm Special opening hours during the Gallery Weekend: May 2 - 4, 2014, 12 am - 7 pm We are pleased to announce the first solo exhibition 'Paintings' by Lawrence Power with new mid- and large-size paintings on canvas. "When I am away from it, my thoughts revolve around this image. Where has
12-17-2012 | Health & Medicine
Atlantic Plastic Surgery Center
Dr. Lawrence Gray Attends ISAPS Conference in Geneva Switzerland
Geneva, Switzerland - Dr. Lawrence Gray attended the 21st Congress of the International Society of Aesthetic Plastic Surgeons held in Geneva, Switzerland from September 4th to the 8th, 2012. This conference held every two years was attended by leading plastic surgeons from all over the world. Although just a handful of plastic surgeons were from the United States, those that attended were the opinion makers and leaders.
08-11-2011 | Business, Economy, Finances, B …
RichContent
A.C. Lawrence Hires Relocation Managing Director Dean Dunbar
New York City real estate brokerage A.C. Lawrence & Company announced today it has hired relocation specialist Dean Dunbar to head its Relocation Division as Managing Director. New York, NY, August 08, 2011 (Straight Line PR) -- Renowned New York City real estate brokerage A.C. Lawrence & Company has announced big changes in its Relocation Division. The company has hired relocation specialist Dean Dunbar to head its Relocation Division as
07-01-2011 | Business, Economy, Finances, B …
Meyer-Chatfield
Lawrence Robinson Joins Meyer-Chatfield Compensation Advisors
Former RCG-Robinson Compensation Group Executive Will Head California Team Jenkintown, PA – Meyer-Chatfield Compensation Advisors, a leading compensation consulting firm for financial institutions nationwide, today announced that Lawrence Robinson has joined the firm. Mr. Robinson is based in San Diego and will lead the firm’s expansion into the corporate compensation arena, and also direct bank sales and consulting activities in the Southern California market. “We are very pleased to welcome Larry
10-25-2010 | Business, Economy, Finances, B …
Lawrence Independent
Lawrence Independent Is Officially Open For Business!
Dear Small Business Owner, It has come to my attention recently that small business owners have found themselves in quite a dilemma when it comes to finding good help. That is what prompted me, a 29-year-old college student to make myself available to professionals just like you who need a support system without all the hassle of having to write a weekly paycheck for someone. My
Comments about openPR
9 o'clock: discuss press release with client, 10 o'clock: submit release to openPR, within the briefest possible time release is published and displayed in a prominent place on openPR.de. I am thrilled!
Zehra Spindler, Calypso Now! - Communication Agency