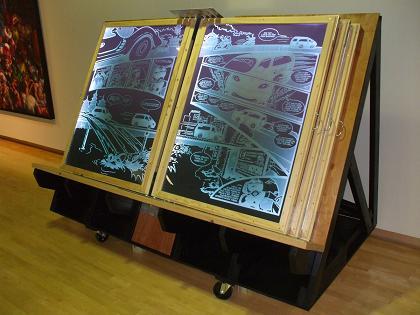 The comic is a single concise story introducing Comangra City, a place where all the world's comic and cartoon genres live and interact with each other in a multi-cultural metropolis. Nearly every country has its own tradition of graphic story. It's time these traditions meet, mix and react with each other. Beyond the story, each page of the Huge Glass Comic Book highlights different graphic storytelling techniques in simple, reproducible ways. It took over 550 hours to create this comic and, four weeks into its completion, it's already attracting interest from galleries, educational institutions and even "Ripley's Believe It or Not! It's a one of a kind opportunity to see a first in comics and in art.

Wade Gugino, writer and creator of the Huge Glass Comic Book, will be present to page through the comic with fans and sell print versions of the comic and graphic story layout guide, as well as individual cards, prints and T-Shirts. This will be the very first public run of the print comic -- a limited edition sold out at ArtPrize 2011 in two weeks.

Mid-Ohio Comic Con is the eighth stop on Wizard World's 2011 North American tour. Hours are Saturday, October 22, 10 a.m. - 7 p.m.; and Sunday, October 23, 10 a.m. - 5 p.m. Tickets are available in advance online at http://www.wizardworld.com/midohio.html at a savings over tickets purchased at the door. Tickets are free for children age 10 and under when accompanied by a paid adult (limit two children per adult). VIP packages with special entry and exclusive items are also available on a limited basis.

The full event schedule can be found at www.wizardworld.com.

10-20-2017 | Arts & Culture
A-BOX
A-BOX to attend LA Comic Con
London UK, Los Angeles, California : A-BOX works in collaboration with major film studios and entertainment companies to provide collectibles, fan favorite brands and creative items packaged together in their mystery box for the ultimate self-gifting, delivered monthly! At the LA Comic Con, A-BOX will be there to connect with their fans and they offer past boxes no longer available online. They will show their much loved special Kingsman, the Golden
10-24-2016 | Arts & Culture
NWI Comic-Con LLC
NWI Comic-Con launches crowd-funding campaign
The NWI Comic-Con wants to bring pop-culture back to Northwest Indiana and you can help! The NWI Comic-Con LLC. (NWICC) is pleased to announce the launch of a Kickstarter crowd-funding campaign. Funding earned via Kickstarter will be specifically divided to enhance the convention experience for our guests and attendees. The more funding this Kickstarter campaign generates, the more we can do within the Northwest Indiana Region. We pride ourselves on giving
12-19-2012 | Arts & Culture
Horror News Network
2012 Horror Comic Awards
For Immediate Release: 2012 Horror Comic Awards Are Here It's that time of year again! Time for the original fan based awards dedicated solely to HORROR COMICS. The 2012 ComicMonsters.com Horror Comic Awards are back. Our staff of horror comic experts selected their top picks for 2012, and now it's time for YOU, the fans to vote for the best. Voting is open from December 19, 2012 – December 30,
10-10-2012 | Leisure, Entertainment, Miscel …
Wizard World
Eisner Hall Of Famer Neal Adams, Humberto Ramos Among Featured Comic Creators At …
Eisner Award Hall of Famer Neal Adams, winner Bernie Wrightson and nominees Humberto Ramos, Art Thibert, Alex Saviuk and Matthew Sturges are among the more than 200 comics creators scheduled to attend Wizard World Austin Comic Con, Oct. 26-28, 2012, at the Austin Convention Center. Adams (“Batman,” “Green Lantern”), Wrightson (“Swamp Thing,” “Detective Comics”), Ramos (“Amazing Spider-Man,” “Impulse”), Thibert (“X-Men,” “Iron Man”), Saviuk (“Stan Lee's Mighty-7,” “The Flash”) and
12-10-2011 | Leisure, Entertainment, Miscel …
Wizard World
POW!’s Comic Book Legend Stan Lee To Attend 2012 Wizard World New Orleans Comi …
Stan Lee, the legendary comic book writer, editor, actor, producer, publisher, and current Chairman and Chief Creative Officer of POW! Entertainment, today announced that he will make a special appearance at Wizard World New Orleans Comic Con, January 28-29, 2012, at the Ernest N. Morial Convention Center. Lee, a member of both the Will Eisner Comic Book Hall of Fame and the Jack Kirby Hall of Fame, will be
10-12-2011 | Leisure, Entertainment, Miscel …
Rolf C. Hagen (UK) Ltd.
Pet Care Manufacturer Donates to Comic Relief
Over 300 retailers and their guests from Britain’s pet trade enjoyed a two-day mix of business and entertainment, at pet care manufacturer Rolf C. Hagen’s annual exhibition held at the Chesford Grange hotel, Kenilworth, on 4th and 5th of September. After the hectic business dealings of the day a Gala Dinner was held with entertainment from top comedian and Comic Relief founder Lenny Henry. As promised, Hagen donated £5.00
Comments about openPR
OpenPR ist the nicest and most clearly laid out PR platform I have seen to this day. The press releases are displayed very nicely and clearly and without any unnecessary frills. The updates are fast and the finished release looks appealing and is clearly legible. Even with 16 years of experience one discovers new things from time to time. Congratulations!
Gabriele Ketterl, Director Marketing & PR, Menads