Novel by the author of A Hundred Reasons to Run 100km 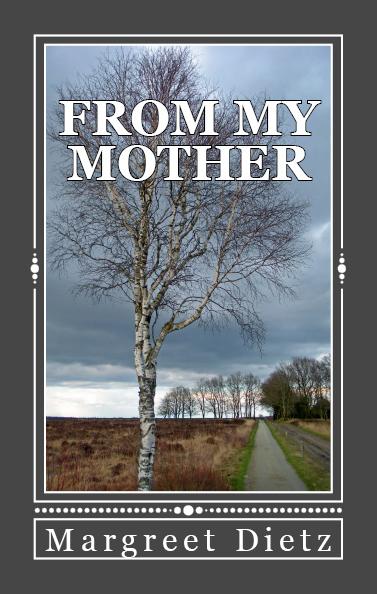 Also for Kindle, iPhone and iPad

From my Mother is a new novel exploring identity through the parallel stories of a marathoner tackling her first 100-kilometre (62-mile) ultrarun and her maternal grandmother who fled Czechoslovakia in the aftermath of a Communist coup d'etat. The first novel by Margreet Dietz, author of four nonfiction books including A Hundred Reasons to Run 100km and Running Shoes Are a Girl's Best Friend, was inspired by a true story. From my Mother considers some of life's fundamental questions, who am I?, and, where do I come from?, through the main character, Nadia, as the experienced distance runner embarks on her biggest challenge yet along the roads of British Columbia's Lower Mainland. In the race, Nadia's thoughts turn to Oma, her grandmother, who emigrated to the Netherlands in the early 1950s as a young widowed mother of one. Though close to her grandmother, Nadia receives a phone call that fuels a recent belief she knows far less about her family history than she always thought. As Nadia struggles with unexpected obstacles in the longest race of her life, the parallels with her grandmother become clearer. However, Nadia also realizes that Oma, now 94, has been tested far more than her granddaughter likely ever will. "As adults, we grow increasingly curious about our roots and often find that we don't know as much as we thought we did," Dietz says. "Sometimes it is too late to ask the questions we have. Or we are simply afraid to ask them." "With this novel I hope to pique readers' curiosity about their own history. We often take the familiar for granted. Knowing where we came from doesn't have to determine our destination but it enriches the journey." From my Mother, a novel by Margreet Dietz Published: October 2011 Paperback: 204 pages Praise for Dietz's other books: "The book is a very good read—very intuitive for someone who is a veteran of ultramarathons or for those who are attempting their first century distance." — International Association of Ultrarunners on A Hundred Reasons to Run 100km "If you’re on the fence about running a 100km, or wondering what your motivation for ultra-running is or should be, Margreet’s book is a must-read. Rather than simply listing reasons, Margreet lays out a beautiful and compelling story on each easy-to-read page. This is a perfect addition to any ultrarunning library!" — Endurance Planet on A Hundred Reasons to Run 100km "While running 100 kilometres may not be on everyone’s bucket list, I would recommend this book to anyone with a passion for running longer distances and anyone interested by the prospect of trying an ultramarathon. As Dietz writes in reason #15: “Because it’ll renew your love for running.” — IMPACT Magazine on A Hundred Reasons to Run 100km "The author's style is breezy and accessible, what you'd expect from a veteran journalist, and running enthusiasts at all levels no doubt will find much motivation in these stories." — Writer's Digest on Powered From Within: Stories About Running & Triathlon "Its crossover appeal alone—existing as a book about both writing and running...—enlarges its potential audience and affords the author a chance to explore her own process, a chance I feel is pretty significant. She does a great job of it, too, at times overtly and other times almost subversively... It's material I can consult linearly or, more delightfully, in single scoops, and it fits in my pocket so I can carry it to a favourite reflection spot." — Writer's Digest on A Work in Progress: Exercises in Writing "I highly recommend this book for both the beginning and struggling writer, as well as any person who is exploring the idea of a radical shift in the way they are currently living their life." — IMJ Coaching on A Work in Progress: Exercises in Writing Order From my Mother in paperback at http://www.createspace.com/3522644 Visit http://www.MargreetDietz.com/ or http://FromMyMotheraNovel.blogspot.com/ for more details. See also http://www.aHundredReasonstoRun100km.com/ Margreet Dietz is an author, novelist and editor. Her nonfiction books are A Hundred Reasons to Run 100km, Running Shoes Are a Girl’s Best Friend, Powered From Within: Stories About Running & Triathlon, and A Work in Progress: Exercises in Writing. Sunshine on a wooden floor is a book of poetry. She is the editor of Timothy Moore's Sub Nine: History's Fastest Ironwomen and Teresa Rider's Reconnect With Food: Eat Your Way to Triathlon Success. A professional journalist since 1996, Margreet reported for Bloomberg News from Brussels, Toronto and Sydney, and worked as a copy-editor at The Australian Financial Review. The stories she wrote for Bloomberg have been published in newspapers worldwide, including in the International Herald Tribune, Globe and Mail, The Vancouver Sun, National Post, The Australian Financial Review, Sydney Morning Herald, The Age, New Zealand Herald, Seattle Post-Intelligencer and De Tijd. Margreet Dietz PO Box 5116 V8B 0C2 Squamish, BC Canada

01-14-2019 | Science & Education
High Technologies Solutions
Top Reasons to Learn SAS Training
SAS software has substantiated itself as the market head in giving another age of business knowledge software and administrations that makes genuine venture insight. The SAS Institute is the world's biggest secretly held software organization. It is likewise the main merchant that totally incorporates driving data warehousing, examination and customary BI applications, to make knowledge from huge measures of data. Isn't that great! SAS has a vast part to play
10-18-2018 | Industry, Real Estate & Constr …
Sure Search
Reasons to Hire Underground Pipe Location Services
To prevent undesired problems in the construction or excavation process, it is important to determine the underground pipe location. The importance to detect the exact location of the pipes is high if you want the process to pass quickly and accurately. Underground pipes are complex networks, especially in large cities like Sydney. The whole city is connected underground. Except for gas and water pipes, you can locate electrical and telecommunication lines
04-27-2018 | Business, Economy, Finances, B …
TRG International
Three reasons why people should attend seminar
No matter what industry your business is in, there will be a lot of weekly, monthly and annual seminars and events where like-minded people congregate to discuss various topics related to your business as well as your concern. Here are three main reasons why people should frequently attend seminars and how seminars can benefit attendees in the modern age we live in. 1. Networking: Networking is one of the most popular
03-23-2018 | Science & Education
touchstone educational
REASONS TO STUDY ELECTRICAL ENGINEERING ABROAD
Studying abroad may be one of the most beneficial experiences for college students. By studying abroad, students get the opportunity to explore a new country and culture along with new educational methodologies. There is a huge range of courses available to choose from for studying abroad. In this article, we are going to talk about the benefits of studying Electrical Engineering abroad. 1. It becomes easy to get your first job As most
09-06-2017 | Business, Economy, Finances, B …
Suma Soft Pvt. Ltd
3 reasons to consider managed security services
Texas (USA), Canada (Toronto) &; India (Business Network)- 29th August 2017: Managed Security Services market saw a growth of 16% in the year 2016. Managed security services offers comprehensive threat intelligence, research and detection services. Hence, the market is growing with a rapid speed. According to CRN news, Gartner predicts the worldwide information security market will reach $86.4 billion by the end of 2017, with 7% increase per year. The market will
01-23-2017 | Business, Economy, Finances, B …
Avila Spaces
6 Reasons to join Coworking in 2017
Coworking is no longer an exclusive space for startups and freelancers. Recent data from the Global Coworking Survey show that it is not by chance that large companies such as Facebook, KPMG and AT&T begin to adhere to this new model of work, not only for the benefits of cost rationalization but also for productivity and employee satisfaction There are currently more than one million people working in Coworking and around
Comments about openPR
We publish our press releases on openPR.de because we like people who are "open" - just like us.
Frank Obels, CEO, INCONET - Informationssysteme, Communication und Netzwerkberatung GmbH