Performance of a great master 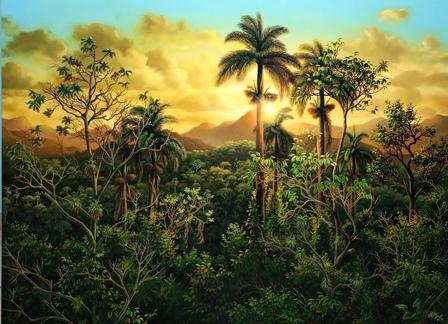 Havana, February 21, 2020 - The researcher in charge of the project "Fidel Micó Catalogue Raisonné" is pleased to announce the public performance of the great master from February 21 to 28. Micó will be painting at the private gallery "Humidores Habana" (Bulevar de San Rafael, Centro Habana, La Habana, Cuba) to show his exquisite technique to create high quality landscape paintings. Access will be free immediately after inauguration ceremony at 6:00 pm. Art lovers, collectors, gallerists, curators, journalists, and historians have been invited to visit Humidores Habana to enjoy this extraordinary performance, and living a week of unforgettable art experiences which include exhibition of oil on canvases finished by Micó a few days ago.Although public performances of painters are usual in Paris, this practice has not been documented in Havana, Cuba. A few persons have seen a Cuban painter working at the artist studio. This is also an extraordinary opportunity for scholars, students, and film makers interested in the painting process and documentation of the contemporary Cuban art. The relevance of this event is far beyond formal issues, because many questions on the work of most Latin American painters will be present at every lecture, exhibition, biennial, art fair, and auction, from now on.The assistance of the most important Cuban artists to the Micó's performance will be almost unavoidable, and a later extension of this forgotten practice could be expected. Something is for sure, an unexpected public performance of a Cuban painter will be a strong motivation for many other artists, from different regions of the country, and could be the starting point of a more innovative artistic movement headquartered in Havana.José A. Buxadó, MSc. Rodríguez Nş 14, entre Maboa y Rabí, apto 1, Rpto. Santos Suárez, Municipio 10 de Octubre, La Habana, Cuba.Fidel Micó (b. 1962) is an ambidextrous painter regarded as one of the prominent figures of an artistic movement that includes more than 50 Cuban landscape painters whose excellent representation of nature has formed the basis for the revival of the genre after the 1980s. The Fidel Micó Catalogue Raisonné highlights the artist's historic presence and significant contribution to Cuban Art of the XX and XXI centuries, and includes biography, chronology, authenticity, and artworks by Fidel Micó currently being compiled (Art Documentation, 2015, 34 (2): 349-353).

01-26-2017 | Business, Economy, Finances, B â€¦
Fidel Mico Catalogue Raisonne
Real Estate Valuation of fine art
The researcher in charge of the project â€śFidel MicĂł Catalogue RaisonnĂ©â€ť (FMCR) is pleased to announce relevant findings on the appraisal of 29 paintings included in the research. The generally recognized method of valuation among appraisers at auction houses is mostly based on previous auction records to obtain a something usually named â€śfair market valueâ€ť (FMV). This value is the price that someone paid for an artwork, no matter, for

02-11-2019 | Advertising, Media Consulting, â€¦
MarketResearchReports.com
Cuba widens reach of 3G services
New research on Cubaâ€™s telecom sector (https://www.marketresearchreports.com/paul-budde-communication-pty-ltd/cuba-telecoms-mobile-and-broadband-statistics-and-analyses ) remains a peculiarity, with state control having stymied rather than promoted the development of all sectors. The country has the lowest mobile phone and internet penetration rates in the region, while fixed-line teledensity is also very low. Fixed-line and mobile services remain a monopoly of the government-controlled Empresa de Telecomunicaciones de Cuba (ETESCA Cubacel). Although there are strict state restrictions over the right
06-29-2017 | Fashion, Lifestyle, Trends
MarketResearchReports.biz
Cigarettes in Cuba, 2017 Published By MarketResearchReports.biz
MarketResearchReports.Biz presents this most up-to-date research on "Cigarettes in Cuba, 2017" Description "Cigarettes in Cuba, 2017" is an analytical report by GlobalData that provides extensive and highly detailed current and future market trends in Cuba. Cuba is the largest island in the Caribbean and one of the larger markets for cigarettes in the region. Since the early 1990s, cigarette sales have been affected by a combination of local production problems, the erratic performance
03-23-2017 | Tourism, Cars, Traffic
Explorations Inc
Explorations announces 2018 Cuba Cruises
The adventure tour company, Explorations has announced the 2018 schedules and rates for three yacht cruise programs in Cuba. They are all People-to-People Cuba programs open to United States citizens. The itineraries explore the western part of the island nation, which is famous for its culture, music, warm people, and art with day tours while sailing from Havana to Cienfuegos. Each day passengers will discover a new port of call,
01-03-2017 | Advertising, Media Consulting, â€¦
PromoQuip Inc
Plinko Board Shipped to Cuba Highlights International Opportunities
PromoQuip Plinko Board ordered to celebrate Jet Blueâ€™s direct flights to Cuba; Michigan manufacturerâ€™s multi-language website key to continued expansion in global marketplace Cedar Springs, MI; January 3, 2017 â€“ PromoQuip, a leading designer and manufacturer of custom promotional equipment recently shipped their first order to Cuba. The custom Plinko Board was ordered by Jet Blue, to celebrate being among a small group of air carriers authorized to provide direct
02-20-2013 | Sports
Baseball Geek Group: Jimm Hendren
Baseball Geek Group: Jimm Hendrenâ”‚Baseball in Cuba
Baseball was first introduced to Cuba in 1860s by students who returned from the US and also from Western sailors docked in the nation. It quickly became popular and was spread widely. In 1878, the Cuban League was established composed of 3 teams â€” Mantanzas, Habana, and Almendares â€” each playing 4 games. At first, players were all whites and amateurs but professionalism soon emerged as rivalry among teams strengthen. The Cuban
09-06-2011 | Fashion, Lifestyle, Trends
Pegasus Spiele
Pegasus Spiele publishes â€žSantiago de Cubaâ€ś
Friedberg/Hamburg, September 5th 2011 â€“ â€žSantiago de Cubaâ€ś, the new board game from eggertpiele will be published by Pegasus Spiele in time for SPIEL 2011 in Essen. Starting September 1st , all distribution and communication duties are being handled by Pegasus Spiele, which takes over from their business partners at AMIGO Spiel + Freizeit GmbH. At this October's SPIEL eggertspiele will be presenting â€žSantiago de Cubaâ€ś at their booth. â€žWe are
Comments about openPR
OpenPR is clearly structured and remains true to its principle of confining itself to the essential parts. OpenPR has proven to be a very good and reliable partner to our media agency: Within the shortest time the releases are online and go down well with the media representatives. The success of OpenPR is reflected in the steadily increasing number of press releases. It is good that OpenPR exists!
Ursula Koslik, Director Marketing & PR, F+W Hamburg