Andy Hui to Bring His Star Power to the CotaiArena 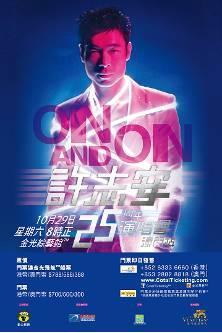 Event poster promoting the On And On 25th Anniversary Concert

Hong Kong pop sensation Andy Hui is set to light up the CotaiArena™ stage with his charms, as he brings his reputable talents to The Venetian® Macao-Resort-Hotel on October 29. Having already generated rave reviews from his sold-out Hong Kong performance in May, the singer and actor will bring his On And On 25th Anniversary Concert to his Macao fans, with tickets going on sale September 28. As one of the most successful Chinese music celebrities, Andy Hui offers his fans an array of hits in both Cantonese and Mandarin, having garnered a host of music awards along the way. With more than 20 studio albums under his belt, including his most recent, 2011’s On and On, his Macao show promises to deliver a superb performance of some of his greatest hits, with the help of an outstanding production unit backing him up. Tickets for Andy Hui’s On And On 25th Anniversary Concert can be purchased Wednesday, September 28 at 10 am, on the first floor of Sands® Macao and at the CotaiArena box office at The Venetian Macao. Tickets are available in three categories. Tickets can be booked online at www.CotaiTicketing.com, or by phone at +853 2882 8818 (Macao) / +852 6333 6660 (HK), and are also available at Tom Lee Outlets and through Hong Kong Ticketing* online at www.HKTicketing.com or by phone at +852 3128 8288. * Hong Kong Ticketing applies a customer service fee in addition to the face value of the ticket on all tickets sold. ### Media contact: Public Relations, Venetian Macau Limited Miki Vong Tel: +853 8118 2707 / +853 6679 9594 Email: miki.vong@venetian.com.mo Andy Tam Tel: +853 8118 2296 / +853 6296 9822 Email: andy.tam@venetian.com.mo About The Venetian® Macao-Resort-Hotel The Venetian® Macao-Resort-Hotel is Macao's first integrated resort featuring stunning replicas of the famous canals and architectural icons of Venice, Italy. The Venetian Macao features 3,000 suites, 1.2 million square feet of convention and meeting facilities as well as a 15,000-seat CotaiArena™ designed for world-class sports events and electrifying entertainment. Also at The Venetian Macao is an impressive, 1,800-seat ZAiA™ Theater for the spectacular Cirque du Soleil® production; more than 30 renowned restaurants; the MALO CLINIC Health & Wellness, the incredibly fun QUBE indoor playground and more than 300 retailers at The Grand Canal Shoppes. Outdoor recreation areas include swimming pools and cabanas, a mini golf course and gondola rides at the outdoor lagoon. Estrada da Baia de N. Senhora da Esperanca, s/n Taipa, Macao SAR, P.R. China

09-26-2011 | Leisure, Entertainment, Miscel …
Venetian Macao
Groove to the Rhythms of Guinea Bissau with Américo Gomes at the Bellini Lounge
With his distinctive, rich voice, Guinea Bissau superstar Américo Gomes will bring his infectious rhythms and melodies to the Bellini Lounge at The Venetian® Macao-Resort-Hotel Friday night. A performer who likes to move freely on stage, Gomes’s warmth of delivery and superb voice tackle both his Guinean and international musical influences – gumbé, zouk, soul and R&B – with equal tenacity and authenticity. With a musical career that began in the 80s,
09-22-2011 | Sports
Venetian Macao
2011 Kumpoo® Macau Open Badminton Grand Prix Gold - CotaiArena™ tournament se …
Badminton fans of all ages can rejoice – as the 2011 Kumpoo® Macau Open Badminton Grand Prix Gold tournament brings world-class badminton talent to Macao’s CotaiArena from Tuesday, November 29 to Sunday, December 4. Officially sanctioned by the Badminton World Federation (BWF), the tournament received entries from 25 countries and regions last year, with around 400 players and officials coming to participate, many of whom currently rank in the world’s top

04-08-2021 | Fashion, Lifestyle, Trends
Nadula Hair
Nadula 4th Anniversary Sale
07/04/2021 Nadula the leading brand in hair products announce its 4th Birthday this week. It’s been now 4 years that Nadula is serving people from different part of the world with their leading products. Nadula Hair, a well-known brand of virgin human hair, is growing in popularity among human hair lovers in America, Europe, and other parts of the world. Nadula is more than just a hair brand; it's
12-17-2020 | Advertising, Media Consulting, …
GlobalAir.com
GlobalAir.com Celebrates 25th Anniversary
On December 14, 2020, GlobalAir.com celebrated 25 years of “Connecting the Aviation Industry” even through a global pandemic. What began in the basement of a house in 1995, has now grown into the largest aviation industry platform on the internet. Through the ups and downs GlobalAir.com has faced throughout multiple economic obstacles, its aviation-related platform has continued to thrive. The company has built a platform of trust by clients and users
03-15-2018 | IT, New Media & Software
Rolustech
Rolustech Celebrates 10th Anniversary!
SAN FRANCISCO, USA – Rolustech reaches an exciting milestone as it turns ten this year. Founded in 2008, Rolustech is a Professional IT Services firm which specializes in CRM, mobile, web and product development. Starting off with two founding members, Hussain Nasir and Shahrukh Riaz, Rolustech has evolved into a team of more than 100 members including seasoned project managers, certified developers, quality assurance engineers, software engineers, technical architects, business analysts
09-07-2011 | IT, New Media & Software
Alyuda Research
Alyuda Research 10th Anniversary
Alyuda Research celebrates its 10th anniversary and announces a Special Discount Offer aimed to make the professional-level technical analysis and trading software application affordable for everyone. Starting from September 1, 2011 and up to October 1, 2011 everybody can get the Tradecision trading software and the NeatScan market scanner with a 10% discount. The tools give traders the ability to enjoy the power of both traditional technical analysis and artificial
04-21-2011 | Politics, Law & Society
ethecon - Foundation Ethics & Economics
Deepwater Horizon Anniversary
BP's obduracy underscores the validity of the International ethecon Black Planet Award 2010 12 months after the disaster in the Gulf of Mexico BP has obviously still not changed its way of thinking. The accountable executives, board chairman C. H. Svanberg and CEO Dudley want to get back to business as usual as soon as possible. They do their best to give the impression that the disaster has been sufficiently mastered. With
03-09-2011 | Fashion, Lifestyle, Trends
GOLFINO AG
GOLFINO celebrates 25th anniversary
Glinde, 8 March 2011 – “25 Years of Elegance in Sport” – with this motto, GOLFINO AG is celebrating its anniversary in 2011. For a quarter of a century, GOLFINO has been providing its sophisticated customers with exclusive sportswear, which combines high-tech functionality with an elegant, sporting style. The company was founded in 1986 and has continuously grown to become the European market leader for golfwear. In March, the 25th
Comments about openPR
9 o'clock: discuss press release with client, 10 o'clock: submit release to openPR, within the briefest possible time release is published and displayed in a prominent place on openPR.de. I am thrilled!
Zehra Spindler, Calypso Now! - Communication Agency