It's Teardown o'Clock for the Xiaomi Mi Watch 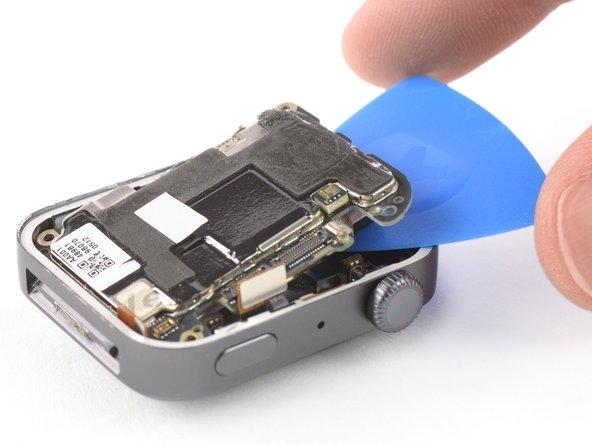 The Mi Watch is modular but hard to open.

Smartwatches are en vogue. The Apple Watch has made itself comfortable on the throne of clever clocks, but other manufacturers have read the signs of the times, too--and often, their products are inspired by Apple's design. So it is with the Mi Watch: It's Xiaomi's first contribution to the smartwatch market. It's been only available in Asia since it was released last November, but Xiaomi says, it's coming to Europe in 2020. iFixit gave it a closer look in our teardown.Just like smartphones, smartwatches have to withstand the challenges of our everyday lives--and sometimes, a broken smartwatch is the consequence. But anyone who'd rather repair their broken Xiaomi Mi instead of replacing it will probably have a difficult time: it's hardly possible to open the device without leaving visible traces.Despite its tough exterior, the Xiaomi Mi proves to be a little friendlier once one's inside. It's built of replaceable components with repair-friendly press fit connections--including the high-capacity battery, which is used efficiently by Qualcomm's Snapdragon Wear 3100 Platform. There is only one circuit board at the bottom, which is tied by plastic rivets and thus not replaceable. The Xiaomi Mi Watch's inner life is largely modular but hard to reach--which is why it strikes 4 out of 10 points on the iFixit repairability score.Dorothea Kessler iFixit Europe PR & Outreach Traenkestr. 7 | D-70597 Stuttgart Phone: +49 157 80608359 Email: dorothea.kessler@ifixit.comiFixit is the world's largest online community for repair. With almost 60,000 free guides, ifixit.com shows people all over the world how to fix their stuff.iFixit was founded in San Luis Obispo, California in 2003. Since 2013 iFixit has a European subsidiary in Stuttgart, Germany. The company earns money through selling spare parts and tools and is engaged in advocating for the Right to Repair.

06-04-2020 | Media & Telecommunications
iFixit
No (e-)waste of time: Why fixing the Apple Watch makes sense
The global smartwatch market keeps growing, and the Apple Watch continues to be the most popular one. It’s a trend the world’s largest online repair community iFixit can confirm: In the UK, the Apple Watch is the 13th most visited device for repair guides on ifixit.com. 13.7 million smartwatches were sold worldwide in the first quarter of 2020, and more than half of them were Apple Watches. Apple just released its
03-24-2020 | Health & Medicine
iFixit
Online community iFixit is crowdsourcing repair information for hospital equipme …
Medical teams around the world do a heroic job these days--and to be able to, they are heavily dependent on medical devices. It's absolutely crucial to keep those devices intact during their heavy utilization. In order to help ensuring that, iFixit is building an online resource for repair and maintenance information on medical equipment. Ventilators are among the most needed machines right now, and there's a lack of them everywhere in

04-05-2017 | IT, New Media & Software
ReportsWorldwide
Smart Watch: Purchase Drivers
ReportsWorldwide has announced the addition of a new report title Smart Watch: Purchase Drivers to its growing collection of premium market research reports. This ‘360 View Update’ assesses the current state of the smart watch market. It quantifies how consumers purchase, use, and think about both smart watches and traditional watches. Findings help smart watch manufacturers, traditional watch manufacturers, and app developers refine their business strategies at this pivotal time in
06-30-2011 | Politics, Law & Society
People First Foundation
Democracy Watch, 2011 - Issue 19
With Party of Regions focused on election law in the quest for power, an opposition member is commended in Europe. As Ukraine remains frozen on the topic of corruption, the President tries to offset debt with investment in sport. Proposed election rule changes would secure total dominance for the governing party The website of the Ministry of Justice has recently published an updated draft of legislation governing the protocol of parliamentary elections
06-09-2011 | Politics, Law & Society
People First Foundation
Democracy Watch, 2011 - Issue 17
As Ukraine steps towards authoritarianism the labour force walks out. With the media protesting against violations of their rights we ask the question: how long before the people follow suit? The good, the bad and the imaginary enemies of Ukrainian media The National Union of Journalists of Ukraine put Yan Tabachnyk, a deputy from the Party of Regions, at the top of a list of government officials and media owners actively repressing
04-06-2011 | Politics, Law & Society
People First Foundation
Democracy Watch, 2011 - Issue 10
With Euro-2012 expenses threatening the already burdened economy, trade unions lobby for greater transparency in the markets. With the link between political authority and personal wealth clearly illustrated, Verkovna Rada raises allowances for Deputies. National Deputy of Ukraine: cost effective? The parliament of Ukraine is implementing some of the most stringent social and economic reforms in the country’s history, yet at the same time sees fit to increase the annual maintenance allowance
03-02-2011 | Science & Education
People First Foundation
Democracy Watch, 2011 - Issue 5
Educational reform in Ukraine: advanced quality or setting the scene for a student unrest, optimisation of budget costs or the demise of the future elite? The draft law N7486-1, registered at Verkhovna Rada by the Ministry of Education, Youth and Sports, promises considerable reform in the educational sphere. According to its authors, predominantly members of the Party of Regions, the immanent reforms will streamline the number of higher educational establishments and
11-04-2010 | IT, New Media & Software
MNH WEB
Watch TV On PC
The digital television package offered by Digitaltvonpc.com promises to be an absolutely new experience. It makes the almost impossible possible: allows you to watch TV in your computer or laptop by using the services of the internet. You have the choice to watch thousands of channels from all parts of the world. Ranging from some important sporting events that are taking place in the other hemisphere to keeping track of
Comments about openPR
9 o'clock: discuss press release with client, 10 o'clock: submit release to openPR, within the briefest possible time release is published and displayed in a prominent place on openPR.de. I am thrilled!
Zehra Spindler, Calypso Now! - Communication Agency