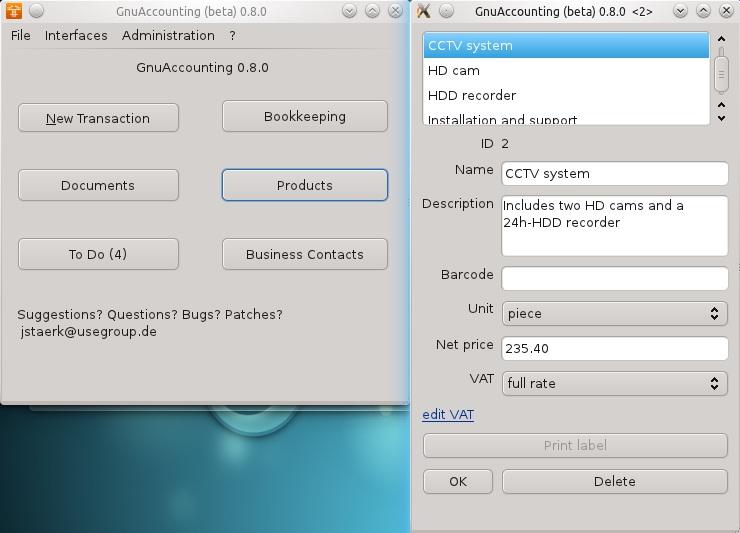 Current version offers corrections, improvements and new features in cross-platform invoicingAlzey, 2011-09-07. “For this latest version of Gnuaccounting some of the changes really were very fundamental, reaching right down into the architecture of the program,” explains Jochen Stärk, who wrote this accounting software. “This did have its advantages, for example, a simplified program structure and sustainability. The disadvantages included a lengthy development time, the fact that it was not possible to transfer data from previous versions and a long and intensive test phase.”In fact, the way that data is stored was not changed completely but a new basis has been provided for it, amongst other things, in technical terms. The main advantage of the switch from Hibernate/HSQLDB to Eclipselink/Derby is that it will allow for any future extensions. The other databases compatible with Eclipselink, particularly MySQL and PostgreSQL, will, however, continue to be supported.The program’s own proprietary Open Business Data Exchange (OBDX) format has been completely abandoned in favor of “openTRANS” (http://www.opentrans.de/). This switchover makes it possible to exchange data with other programs, as well. openTRANS is an open and independent standard for electronic invoices and is being developed under the management of Fraunhofer Institut für Arbeitswirtschaft und Organisation.If so desired, Gnuaccounting can now send out invoices to customers, including the relevant openTRANS files, by e-mail. In addition to this, the osCommerce online shop link has been switched to openTRANS. In order to guarantee better openTRANS support, in the new version article descriptions and supply units such as hour, meter or quantity have been introduced for the first time.Also with the aim of being able to better transmit data, Gnuaccounting has now introduced a credit/debit indicator into the staggered set of accounts and can be exported into a new format for the “Addison” software that is popular with accountants.Nonetheless, Stärk does still think that there is room for improvement. “There are still errors in how the libraries interact with their environment. Owing to a feature of OpenOffice.org that has not yet been ported, a Mac version is not yet possible and with Linux text input does not always function properly in the template design. In these areas, we have to rely on the OpenOffice.org, LibreOffice, Java and Gnome communities,” explains Stärk.Stärk also admits that the program’s user interface “still looks ghastly,” adding that this is a good starting point for new programmers who want to make a contribution to Gnuaccounting because it is relatively simple. Anybody interested should just get in touch with him by e-mail.Moreover, he considers it unsatisfactory that the program is still “rather weak” on annual accounts. And he adds that although it works beautifully for his company getting his accountant to do the annual accounts, if somebody does not have an accountant, he thinks that more balance sheet-related features “would be desirable”, or at least a complete P/L feature.However, as Stärk explains, it should now at last be possible to deal in forthcoming versions with other items on the to-do list, such as a transaction history or the facility to show previous invoices per customer, thanks to the recently improved infrastructure.The new version works not only with Windows 7, but also with Vista and XP. Other problems that have now been corrected include the way the program may “freeze” with invoices containing several items using Windows.Gnuaccounting 0.8.0 will be coming out on http://sourceforge.net/projects/gnuaccounting/files/gnuaccounting/ , 03:00 p.m CET. on Friday, 2011-09-09. Until then, a preliminary version will be available at http://www.gnuaccounting.org/gnuaccounting080prerelease.zip .About Gnuaccounting: Gnuaccounting is an open source Java invoicing program with accountancy functions. In order to create invoices and records it has OpenOffice.org embedded in it. It supports smart card-based online banking (HBCI) and can export data, for example, for preliminary VAT returns issued electronically. The first version was published on March 25, 2005. Since then there have been 27000 downloads. The program is available in German and English, it can be used as a portable application and, upon request, can use external databases such as MySQL or PostgreSQL instead of the embedded Apache Derby. The 32-bit versions are supported by Windows(r)(tm) (XP, Vista, 7) and KDE-based 32 and 64-bit versions of Linux. Further information can be found on the official Gnuaccounting website: http://www.gnuaccounting.orgAbout usegroup: usegroup is an IT company that has been in operation since 1998, focusing on IT consulting and Web development (backend programming). The company is based in Alzey. Its owner, Jochen Stärk, has a BA in Information Systems and is the founder of Gnuaccounting. Further information on: http://www.usegroup.de/usegroup Inh. Jochen Stärk c/o Jochen Stärk Albigerstr. 22 55232 Alzey Germany E-mail: jstaerk@usegroup.de Tel.: 0049 - (0) 177 - 4512645

You can edit or delete your press release Open source accounting software Gnuaccounting enters round 0.8.0 here

06-03-2014 | IT, New Media & Software
usegroup
Release of Gnuaccounting 0.8.5
Support of "ZUGFeRD" in the new version of the open-source accounting software Alzey, Germany, 2014-05-30 Gnuaccounting is the first free and open-source software which can read and write invoices in the ZUGFeRD standard, using the recently released Mustang-project at http://www.mustangproject.org . Small amendments like new units, new expense categories (telecommunication), placeholders for IBAN, BIC and SEPA mandate, corrections and a new forum complete the picture: The new Google group at https://groups.google.com/forum/?hl=de#!forum/gnuaccounting is
08-27-2013 | IT, New Media & Software
usegroup
Open-Source-Accounting Gnuaccounting supports BezahlCode and Magento online shop …
Easier processing of incoming invoices with "BezahlCode" and one-click-creation of invoices or shipping tickets from orders in Magento shops Alzey, Germany, 2013-08-12 Gnuaccounting's payment process was automated with the BezahlCode ("Payment code", please refer to http://www.bezahlcode.de/) standard, a 2D-barcode on the invoices to store information how to balance the invoice, including amount, payment purpose and recipient's bank details. This allows to balance the invoice practically while scanning it. Accounts, previously only selectable
01-24-2013 | IT, New Media & Software
usegroup
Open-Source-Accounting Gnuaccounting releases version 0.8.2
Alzey, Germany, 2013-01-15 Gnuaccounting's document management now supports multiple scanners. It is now possible to view scanned or imported images from within the software itself and scan or import already from the import wizard. The document number is now recognized from the file name. The document number is no longer mandatory in the import from bank statement and can be amended later. The asset management creates a report in the spread sheet
09-06-2012 | IT, New Media & Software
usegroup
Open-Source-Accounting Gnuaccounting releases version 0.8.1
New version ends a period without new features of the Free invoicing and accounting application Alzey, Germany, 2012-08-20 New features Writing/receiving invoices After writing an invoice the user can now select the number of printed copies and directly book as “paid in cash“. LibreOffice-Support has been improved and newer versions are now supported, e.g. Kubuntu Linux 12.04 now runs „out of the box“. Owed to a new library to embed OpenOffice/LibreOffice and the work of
10-12-2010 | IT, New Media & Software
usegroup
Free accounting software Gnuaccounting releases version 0.7.8
Alzey, Germany, 2010-10-11. „With Version 0.7.8 Gnuaccounting continues it's way to a stable and versatile product“, says Jochen Stärk, owner of usegroup. Gnuaccounting's main target groups are small enterprises, consequently a german small business tax law simplification, „Istversteuerung“ (taxation when a receipt is issued, not when the work has been delivered) is now supported. Medium sized businesses can now benefit from the „SKR04“ accounting chart, which has been added in
07-27-2010 | IT, New Media & Software
usegroup
New Version of the free accounting software Gnuaccounting more stable
Version 0.7.7: OpenOffice 3.2-compatible, creation of document templates out of the box Alzey, 2010-07-26: "In its five years of existence, Gnuaccounting has never been more stable than it is now", says Jochen Staerk, owner of usegroup. With the version 0.7.7 the IT consulting company usegroup now presents the 48th release of its free accounting software since its initial release in March 2005. The most important improvement is that Gnuaccounting now also works
Comments about openPR
Your portal is fast, simple, and easy to use. Others may have more functions but they also demand more editing time, you have to preformat the text in order to achieve a good result etc. I think openPR is really fantastic!
Andreas Knepper, wallmedien AG