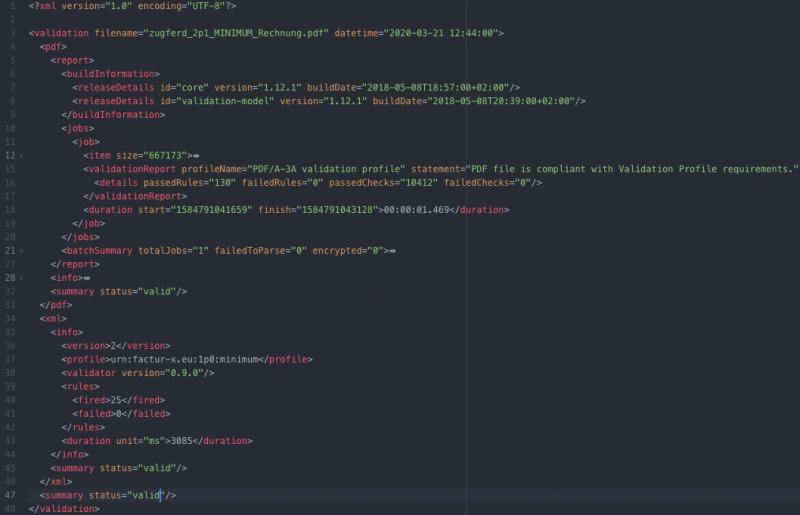 Frankfurt am Main, Germany, 2020-03-21Version 0.9 of the e-invoice validator software "ZUV" will be released on Tuesday, March 24, between 3 and 4pm CET. The free download will be available from it's Github site, https://github.com/ZUGFeRD/ZUV/releases .The new version supports the new versions of the e-invoicing standards Factur-X 1.0.05 and ZUGFeRD 2.1, which will be released by their respective organizations on the same day."Validators" software to syntactically check sample files, are important for formats like Factur-X/ZUGFeRD because they substitute interoperability tests with recipient software. Sample files can be tested once with the validator and do not have to be tested against multiple pieces of recipient software.Furthermore, e-invoice validators can often automatically check the invoices by re-caculating the amounts.The free open-source validator "ZUV" already exists since 2017, but it was updated, enhanced and already used systematically in the review process of the release of ZUGFeRD 2.1, that is why it is available from day one. Further details on the changes in this version can be obtained from https://github.com/ZUGFeRD/ZUV/blob/master/History.md .About ZUVOn 2017-07-24 "ZUV" ("ZUGFeRD and VeraPDF") was first released on https://github.com/ZUGFeRD/ZUV/ from the makers of the open-source Java ZUGFeRD library Mustangproject. The platform independent tool validates ZUGFeRD 1 und 2.1/Factur-X 1.0.05, does not require internet connectivity and may be used, customized, and integrated for free even in commercial software.A embedded Open-Source PDF/A Validator from the Open Preservation Foundation, VeraPDF, as well as the official ZUGFeRD Schema- and Schematron files are used in the technical core of ZUV.ZUV can e.g. be used in the invoice ingesting workflows as well as on servers for automated software builds and tests. E.g. the online interface of the "ZUGFeRD Community" on https://www.zugferd-community.net/de/open/validation uses ZUV to perform it's validations.About Factur-X/ZUGFeRDFactur/X-ZUGFeRD are de facto identical, open European e-invoicing standards. They embeds machine readable UN/CEFACT XML-invoice files in human readable PDF files and can be used in B2B and B2C and, due to their compliance to Directive EU/2014/55 and EN16931, B2G invoices.The e-invoicing format ZUGFeRD 2.1 will be published by the "Arbeitsgemeinschaft fuer wirtschaftliche Verwaltung e.V." (https://www.awv-net.de/) on March 24, 2020. At the same day the french "Forum National de la Factur Electronique" (http://fnfe-mpe.org/) will issue their updated Factur-X 1.0.05.So far, the "french edition" Factur-X 1.0 and the "german" ZUGFeRD 2.0 were, despite their different version numbers, technically but not chronologically synchronized.ZUGFeRD 2.1 now also supports the filename factur-x.xml for the embedded XML. This way, ZUGFeRD 2.1 and Factur-X 1.0.05 are so similar that they are virtually indistinguishable.Jochen Staerk Huswertstr. 14 60435 Frankfurt Germany ++496956994018 jochen@zugferd.orgJochen Staerk published the open-source accounting software Gnuaccounting in 2004, and the complementary e-invoicing library Mustangproject in 2014. 2017 he published the first version of the ZUV validator under the Apache Public License.

You can edit or delete your press release New version of open-source E-invoice validator ZUV being released for ZUGFeRD 2.1 here

11-10-2020 | IT, New Media & Software
usegroup
Mustangproject 2.0 to integrate e-invoice validator
Mustangproject is an open source e-invoicing library and toolkit. It helps companies to process electronic invoices by providing the functionality to read, write and validate them. New in version 2 Instead of ZUGFeRD 1, ZUGFeRD version 2 is now the default choice and the library is now available via Maven Central, making it even easier to embed. It's interface has been enhanced and Mustangproject now supports absolute and relative charges and allowances on
04-17-2015 | IT, New Media & Software
usegroup
Open Source Accounting Software for the US
Frankfurt am Main, Germany, 2015-04-16. Version 0.8.8 of Gnuaccounting adds suport for sales taxes: Until recently, only value added taxes were supported: In Europe, VAT is issued on all invoices and paid by both private and business customers. The businesses, however, announce how much VAT they spend on invoices of other companies and the IRS compensates this amount. In the new version, it is possible to additionally enable sales tax and define per
04-01-2015 | IT, New Media & Software
usegroup
Mustangproject 1.1.1 released
Today, 2015-03-31, the Mustangproject released it's new version 1.1.1. New in this version is the Maven repository and the possibility to embed custom XML. About Mustangproject: Mustangproject (http://www.mustangproject.org) is Java-ZUGFeRD library licensed under a permissive Open-Source-license (the Apache Public License). About ZUGFeRD: ZUGFeRD (http://www.ferd-net.de/front_content.php?idcat=0&idart=0&client=4⟨=4&error=1) is a metadata (like amount, payment modalities or tax rates) standard for PDF invoices. usegroup is a 1998-founded web factory with a focus on backend development. It is based in Alzey,
08-22-2014 | IT, New Media & Software
usegroup
Improved templates and ZUGFeRD 1.0 in Gnuaccounting 0.8.6
The new version of the open-source invoicing and accounting application Gnuaccounting supports version 1.0 of the PDF-invoice-metadata-standard ZUGFeRD and extends the possibilities of the template system. Alzey, Germany, 2014-08-15. The new default template can now access settings like the company name and supports conditional placeholders to be able to display a different text if the amount will be deducted from the customer's account. To be able to precisely mention the SEPA