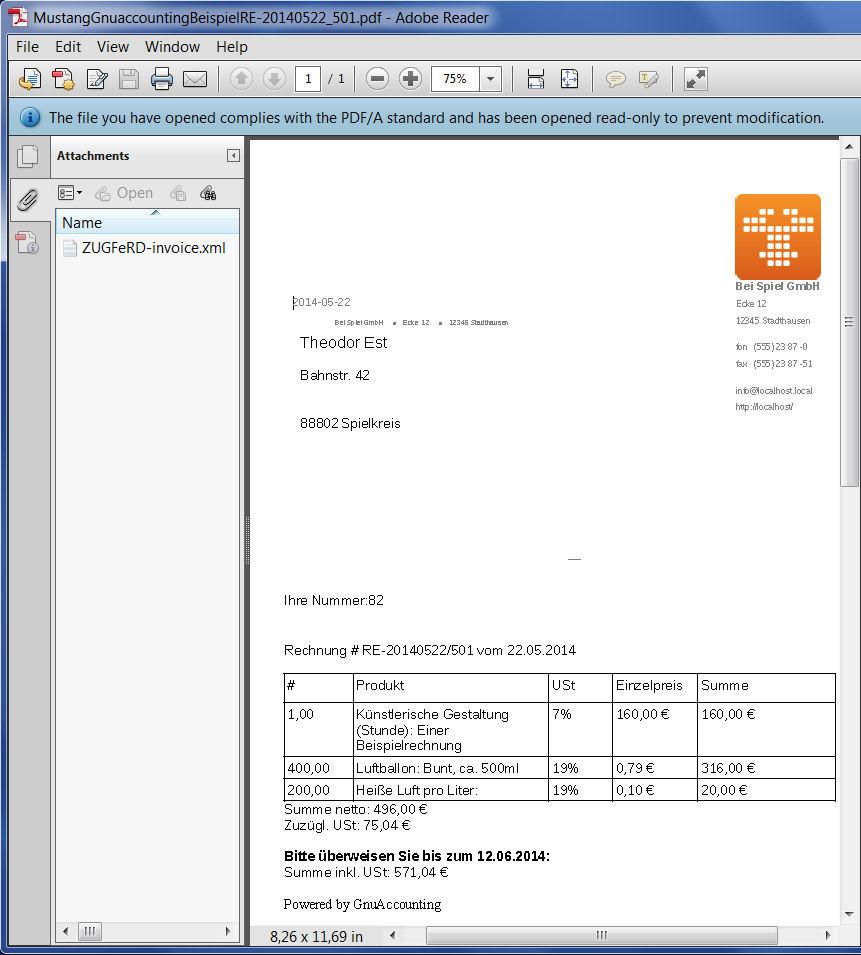 Support of "ZUGFeRD" in the new version of the open-source accounting softwareAlzey, Germany, 2014-05-30Gnuaccounting is the first free and open-source software which can read and write invoices in the ZUGFeRD standard, using the recently released Mustang-project at http://www.mustangproject.org . Small amendments like new units, new expense categories (telecommunication), placeholders for IBAN, BIC and SEPA mandate, corrections and a new forum complete the picture: The new Google group at https://groups.google.com/forum/?hl=de#!forum/gnuaccounting is available for user and developer questions and feedback.On the occasion of this new release, Gnuaccounting invites to two webinars, a Gnuaccounting First Time Users Q&A Webinar Tuesday, 2014-06-03 19:00-20:00 CET and a Gnuaccounting First Time Developers Q&A Webinar one week later, Tuesday, 2014-06-10, 19:00-20:00 CET. These webinars are held on an introductory level, explicitly aimed on ordinary users and interested developers. 8 participants can participate using Windows or Linux. Participants are requested to also take part in the audio conference, the webinars are free and will be recorded and published. Signup is possible on first-come-first-served-basis until the day before by sending an according mail to webinar@gnuaccounting.org.Gnuaccounting 0.8.5 is available since Friday, 2014-05-30, 17:00 CET on http://sourceforge.net/projects/gnuaccounting/files/gnuaccounting/ . The release notes provide further details on the new version.About ZUGFeRD:ZUGFeRD-compliant PDF invoices include machine readable metadata of the contents of the invoice, which would otherwise have to be manually read and typed, like total amount and payment recipient. Further information about ZUGFeRD are available on http://www.ferd-net.de/front_content.php?idcat=231⟨=3.About Gnuaccounting:Gnuaccounting is an open source Java cross-platform accounting and bookkeeping application. For the creation of invoices and vouchers it embeds OpenOffice. It supports chip-card-based online banking (HBCI) and exports data e.g. for VAT announcements. The first version was released on 23 March 2005. Since then, it has been downloaded more than 32,000 times.The program is available in German and English and can be used as a portable application and uses, if desired, external databases like MySQL or PostgreSQL instead of the embedded Apache Derby. The application is compatible with the 32-bit version of Windows (XP, Vista, 7) and KDE-based 32- and 64-bit versions of Linux.Further information can be found on the official website of Gnuaccounting: http://www.gnuaccounting.orgAbout usegroup: usegroup is a 1998-founded web factory with a focus on backend development. It is based in Alzey, Germany. Owner Jochen Stärk has a information systems degree (Diplom-Wirtschaftsinformatiker, BA) and is initiator and author of Gnuaccounting. Further informationen at: http://www.usegroup.de/usegroup Inh. Jochen Stärk c/o Jochen Staerk Albigerstr. 22 55232 Alzey Germany Tel: ++49+67319979975 Email: jstaerk@usegroup.de

You can edit or delete your press release Release of Gnuaccounting 0.8.5 here