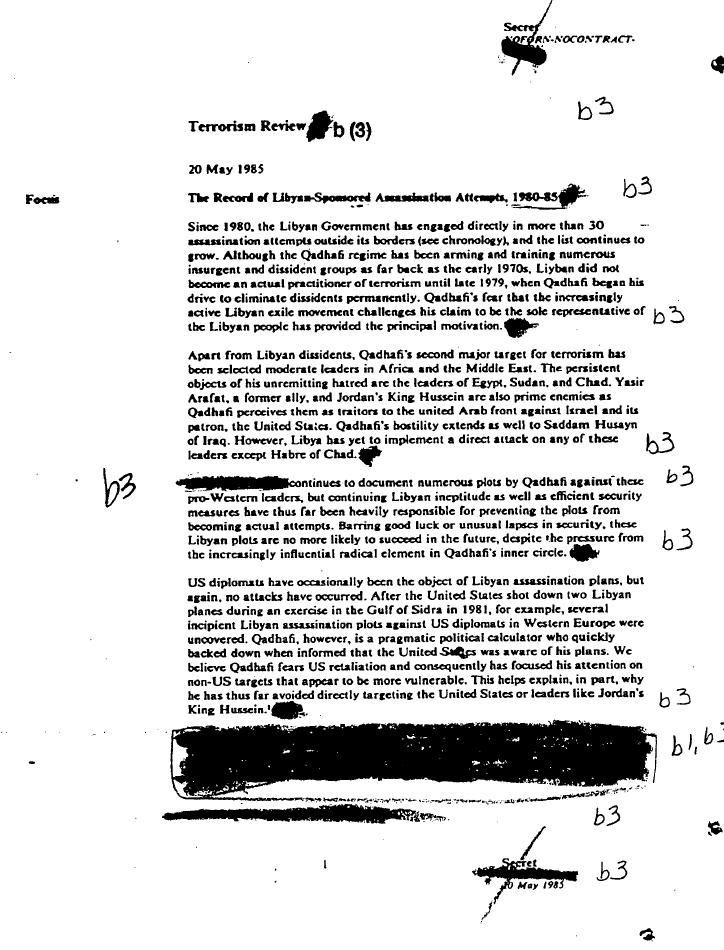 Los Angeles - BACM Research/PaperlessArchives.com has announced the publishing of CIA files related to the Pan Am Flight 103, Lockerbie Bombing. The files can be downloaded for free at:http://www.PaperlessArchives.com/panam103cia.htmlThe files date from 1984 to 1999. These are the most recent files on Pan Am 103 released by the CIA. This set of files is unique because it includes memos on the direct handling of an intelligence source. This type of information is exempt from the Freedom of Information Act (FOIA) and is not often released by the Agency.The files cover information received by the CIA on Abdel Basset al-Megrahi. Al-Megrahi is the only person ever convicted in the Pan AM 103 case. The Scottish government in 2009 allowed al-Megrahi to be released from custody and returned to Libya, because of his failing health. With the recent fall of Muammar Qaddafi's regime, there have been renewed calls for al-Megrahi to be returned to Scottish custody or extradited to the United States and put on trial.Two months before the bombing, a CIA memo found in this set mentions information from an informant about al-Megrahi, who at that time was a Libyan intelligence officer, and the recent removal of explosives he stored in Malta. The files contain CIA reports created in the years before the Pan AM 103 bombing, covering Libya's methods of sponsoring terrorism. This set of files covers the practice of supplying weapons to terrorist groups by Libya under Muammar Gaddafi. The files contain information on the assassinations of Qaddafi’s opponents living abroad. One document contains a chronology of Libyan-sponsored assassination attempts from 1980 to 1985.Memos outline contacts with a Libyan intelligence agent working for Libyan Arab Airlines in Malta. He first contacted the CIA on August 10, 1988. He described Malta as "a primary launching point" for Libyan intelligence and terrorist teams en route to and from Europe. About Pan Am Flight 103Pan Am Flight 103 took off from London's Heathrow Airport on December 21, 1988. The 259 passengers and crew, including 189 Americans, were on their way to New York City. Twenty-seven minutes after leaving Heathrow, at 7:02 PM, while flying over Scotland, a bomb inside the plane exploded. Everyone on the plane and 11 people on the ground in Lockerbie, Scotland were killed. Thus the incident is often referred to as the Lockerbie Bombing.An article appearing in the May 11, 1989 issue of the Washington Post reported that the Central Intelligence Agency had concluded that the Iranian government was responsible. The CIA believed that Iran hired a Palestinian group operating in Syria to perform the bombing. Eventually responsibility would be attributed to Libya.On November 14, 1991 the United States and Britain announced criminal charges against two Libyan intelligence officers, Abdel Basset Ali Al-Megrahi and Lamen Khalifa Fhimah. In August of 1998, Libyan leader Moammar Gadhafi announced that his country would accept the United States and British plan to put the two suspects on trial by a Scottish court convened in the Netherlands. On April 5th, 1999 the two suspects were transported from Libya to the Netherlands. After a 40 week trial, on January 31, 2001, a three judge panel returned a guilty verdict against Abdel Baset Ali Mohamed al-Megrahi. The panel acquitted Al-Amin Khalifa Fhimah.The files can be downloaded for free at:http://www.PaperlessArchives.com/panam103cia.htmlAbout BACM ResearchBACM Research through PaperlessArchives.com publishes documentary historical research collections. Materials cover Presidencies, Historical Figures, Historical Events, Celebrities, Organized Crime, Politics, Military Operations, Famous Crimes, Intelligence Gathering, Espionage, Civil Rights, Civil War, World War I, World War II, Korean War, Vietnam War, and more. Source material from Federal Bureau of Investigation (FBI), Central Intelligence Agency (CIA), National Security Agency (NSA), Defense Intelligence Agency (DIA), Secret Service, National Security Council, Department of Defense, Joint Chiefs of Staff, Department of Justice, National Archive Records and Administration, and Presidential Libraries.http://www.paperlessarchives.comJerry Spencer Research Director BACM Research – PaperlessArchives.com 264 South La Cienega Blvd #1142 Beverly Hills, CA 90211 (310) 289-2320 E-mail: press@paperlessarchives.com

You can edit or delete your press release Pan Am Flight 103 - Lockerbie Bombing - al-Megrahi CIA Files Published by PaperlessArchives.com here