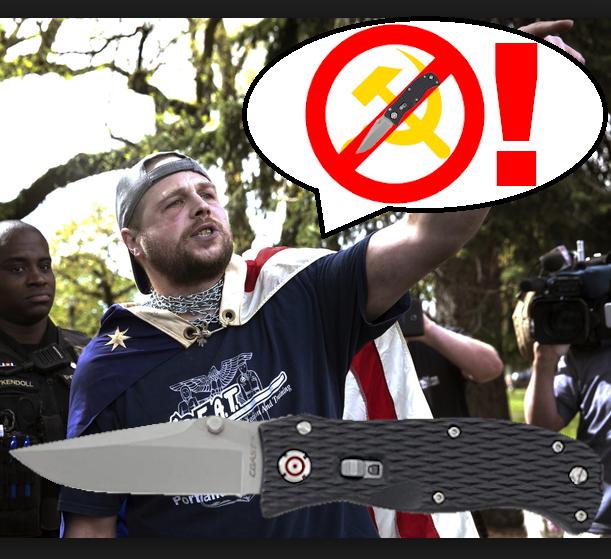 Accused murderer Jeremy Joseph Christian gave a customer testimonial for the knife he used to slash the throats of three men that confronted him on a crowded commuter train in 2017. The incident was quickly labeled a hate crime by the press due to Christian’s anti-religious rant that sparked the confrontation and his conduct at a free speech march organized by pro-Trump conservatives the previous month.“I killed two commies like butter thanks to the patented smooth assist technology of my Coast Rapid Response pocket-knife.” Jeremy Joseph ChristianThe testimonial was given to a former inmate with affiliate marketing experience that was doing time with Christian the summer after the stabbings. Christian shared some of his discovery with him that contained a screenshot of the knife on the Coast Products website. He then pointed out to Christian that he could make him a spokesman for the knife without ever running it by the knife company simply by signing up for an Amazon Associates account, taking Christian’s testimonial, and posting it online with an affiliate link to Amazon where users can purchase their own Coast Rapid Response Knife if they wish.CopBlaster.com held off on publishing the testimonial knowing people would be more interested once Christian’s trial finally starts. Jury selection is scheduled to begin on January 21st. Christian maintains that he acted in self defense after being attacked by members of Antifa. Sole survivor Micah Fletcher was present at the free speech rally that Christian attended. Christian believes that Fletcher recognized him from the rally and that is why he confronted him on the train. While in jail Christian has been watching the news closely for acts of violence by Antifa to support his claim that anyone in his position would have a legitimate fear for their safety.For more information visit:Cop Blaster: Police Misconduct Monitor https://copblaster.com Exclusive: Jeremy Christian Murder Weapon Customer Testimonial https://copblaster.com/blast/3357/exclusive-jeremy-christian-murder-weapon-customer-testimonialP.O. Box 86653 Portland, OR 97286CopBlaster.com is an online community dedicated to helping the innocent and those that just are not as guilty as alleged.