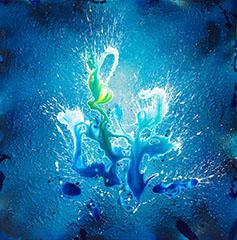 With the solo exhibition JEUX D’EAU, GALERIE SUPPER, Baden-Baden, presents works by the artist Christian Awe (b.1978, Berlin) for the first time. Awe's work combines seemingly playful elements with powerful colors on the one hand and deceptively real looking illusions of water on the other, which leads to a tension the spectator cannot resist. Through its abstract forms - smears or splashes - the luminous acrylic paint implies a particular way of movement, which almost escapes the picture, rendering its surface tactile. Roughly quoting the philosopher Vilém Flusser, it is exactly this touching gaze that is able to reconstruct the abstracted dimensions of meaning, which have been merely insinuated by the surface. In fact, the complexity of stratification, which is so characteristic for works by Awe, is to be seen only with a closer look. By means of partial scratching, the artist reveals hidden, overlaid layers of color and meaning and thus gives his works the typical form language within a well calculated arch of suspense between inside and outside. What seems to be a spontaneous gesture really is the outcome of a long process of application and removal. The formerly explosive-expansive impression thus changes to the opposite: The spectator is almost soaked in by an undertow which sends him on a journey of discovery and turns the smears into hieroglyphs. “Just like when one looks into the clouds, the brain starts to associate things, forms, and figures“, Awe remarks. Abstraction becomes narration. Here, we are back with Flusser, whose touching, wandering gaze is directed in equal parts by the structure of the picture as well as by the intention of the spectator. The dialectics of movement within Awe's works thus reveal not only the inner life of the pictures but also our very own imagination.The focus of the exhibition JEUX D‘EAU lies, as the name suggests, on Christian Awe's water pictures. As an extension of his artistic repertoire, the artist has organically integrated this technique into his works. In most of his "pure" water pictures, there are only very few layers on top of each other. The monochrome, seemingly three-dimensional color fields are calmer and less explosive than earlier works by Awe. As if real water drops or runlets would spread over the canvas, the pictures seem uniquely alive and almost photographic. The spectator is tempted to touch the pictures in order to match the visual perception with reality. Within current works, which take up water elements, the layering is getting more intense again. Through powerful splashes, running over the canvas like colorful runlets and covering the layers underneath or seeming to be applied almost randomly as drops and specks of paint, Awe combines this water technique with stilistic elements of his earlier works and therefore provides the pictures with their very own dynamic and power of expression. Yet, water takes on an important role not only formally but also content-wise within recent works of Christian Awe: Water is a symbol of purity and source of life on the one hand, while on the other representing the destructive, uncontrollable force of nature as well as thousands of refugees, who have to leave their homes and set forth on a long and dangerous journey across the Mediterranean Sea in order to find security. More than a few lose their lives on the way. With respect to the prevailing situation of refugees in Europe, Awe's works are not only artistically, but also sociopolitically relevant. With his works, the artist wants to address subjects such as life, home, cultural diversity, hope, solidarity, and a collective spirit. He wants to make the spectator think - but not in an act of indicting but with the aid of positive enery and optimism, without which we will not be able to handle the social challenges of our time. Christian Awe (*1978, Berlin) studied painting at the Universität der Künste in Berlin under Georg Baselitz and, as a master student, under Daniel Richter. His works have been exhibited internationally at institutions such as the Massachusetts Museum of Contemporary Art and the Salsali Private Museum in Dubai. Apart from various international exhibitions and residencies - such as at Princeton University, USA - Awe Neben verschiedenen internationalen Ausstellungen und Residences – unter anderem an der Princeton University, USA – Awe is committed to a number of social and cultural projects, gave lectures and taught at different educational institutions such as Yale, the Justus-Liebig-University in Gießen, the Universität der Künste and the ESMT in Berlin.Opening: Saturday, 10 June 2017, 6 - 8.30 pm Duration: 11 June - 23 July 2017 Opening hours: Wen - Fri noon - 6 pm; Sat - Sun noon - 4 pmFounded in 2002 it opened in Baden-Baden in 2012 with its current profile. The gallery promotes young, emerging artists with an unique signature. It is the intention to correlate them with renowned artists. Their positions should complement and stimulate each other, whereas every artist keeps his own characteristics.GALERIE SUPPER Kreuzstraße 3 D-76530 Baden-BadenWed. - Fri. 12 am - 6 pm Sat. - Sun. 12 am - 4 pmPress Contact: Dirk Supper Phone : +49 - 72 21 - 37 30 450 Fax: +49 - 72 21 - 37 30 451 E-mail: presse@galerie-supper.de

You can edit or delete your press release Christian Awe: Jeux d'eau here

06-17-2019 | Arts & Culture
GALERIE Supper
Sebastian Wehrle and Friends
GALERIE SUPPER is pleased to announce our first presentation of selected works by Sebastian Wehrle alongside internationally renowned photographers such as Cindy Sherman, Peter Lindbergh or Hiroshi Sugimoto within the framework of the upcoming exhibition Sebastian Wehrle and Friends. The exhibition will focus on photographic strategies of staging. The portrayal of the self and others has gained relevance within the realm of social networks in the past years. However, the staged
02-07-2019 | Arts & Culture
GALERIE Supper
GALERIE SUPPER at art KARLSRUHE
GALERIE SUPPER ist pleased to announce its participation in art KARLSRUHE 2019, one of Germany's biggest art fairs. Within the context of international exhibitors with a focus on modern and contemporary art, we will present well known als well as new positions from the program of the gallery. Next to the impressive thread paintings by Monika Thiele (b. 1966, Erfurt), and Tino Geiss' (b. 1978, Jena) multilayered tape works, most different
01-11-2019 | Arts & Culture
GALERIE Supper
Opening I Andreas Lau: S CH ICHT
GALERIE SUPPER is pleased to announce S CH ICHT, an extensive insight into the artistic development of Andreas Lau (b. 1964, Karlsruhe). The solo show presents selected works from different stages of Lau’s past work. “Vielschichtigkeit” is a German term which implies complexity as well as a multi-layered structure. Methodologically, is has been highly relevant for Lau’s artistic work for more than 25 years now. In the beginning, his paintings resembled
11-19-2018 | Arts & Culture
GALERIE Supper
Opening: Intakt im Takt
With "Intakt im Takt" ("Intact on Time") GALERIE SUPPER presents a diverse group show. Based on the programme of the gallery, it additionally presents internationally renown positions. The composition of a painting, a drawing or a collage is - as the term already implies - never limited to its material dimension. Different temporal levels play a major role within the creation as well as within the reception of an art