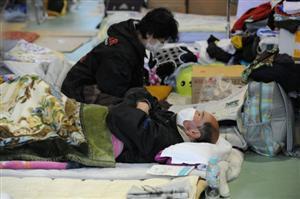 Munich, 30.03.2011. An earthquake measuring 9.0 shook the north-east of Japan on 11th March 2011. The resulting powerful Tsunami destroyed hundreds of kilometers of the east coast of Japan. Dozens of cities were either totally or partially destroyed. The death toll is still largely unknown, however, the figures already lie far above the 20,000 mark and hundreds of thousands are homeless. A nuclear catastrophe is taking place around the area of Fukushima, the extent of which still not known and is posing an incalculable risk to the relief workers in certain areas. The Japanese political handling of information regarding the situation in Japan is causing problems in gauging the extent of the problem, since the situation is played down and international help has been more or less declined.The situation and Project planning (since the 11.03). It became apparent quite early on that we would not be sending medical teams to Japan. In this disaster a different approach would be needed: DEMIRA relief worker and project manager Kjeld Duits enabled us to form our own independent conclusions about the situation. Kjeld has lived in Tokyo for over 30 years, speaks the language and knows the culture. He is on the ground in the region working as a photographer and journalist and is speaking to affected persons and officials. By doing this he was able to establish the size and type of the help needed, not only through communication with those affected but also by those officials (head of evacuation camp, governors of affected cities etc.) who directly approached him. The cultural specifications of Japan require that the relief goods be carefully planned. Therefore we decided to collect all goods from inside Japan. After the largest part of the relief goods had been assembled we decided to start the project. A medical team is still not required as far as we can see. Furthermore, due to the unclear situation nuclear power plant, sending German relief workers at this time is too risky. We have been working since the 22nd of March. The project manager is Kjeld Duits. He is carrying out the needs assessments, making lists of requirements and is taking care of the distribution of aid. In the Region of Kyushu Dr Miyata and his 4-mann team are coordinating the supplies in the south. The goods are then loaded onto 10t trucks and transported to the north to be distributed. We are cooperating with camps in the destroyed city of Rikuzentakata as well as with the council directly. Rikuzentakatk lies 200km north of Fukushima.DEMIRA e.V. is a humanitarian, charitable, non-governmental organisation (NGO), which is non-religious and politically independent. It was founded in 1996 in order to provide humanitarian mine clearance, EOD (explosive ordnance disposal), and emergency medical aid to people living in postwar countries and to victims of natural disasters and civil unrest. DEMIRA provides relief irrespective of race, sex, religion, or political orientation.DEMIRA Deutsche Minenräumer e.V. Hartmannstraße 8 80333 Munich Tel.: 089/29165620 Fax: 089/29165619 Mariem Pusina Fundraising and Public Relations mariem.pusina@demira.org http://www.demira.org

09-08-2011 | Politics, Law & Society
DEMIRA Deutsche Minenräumer e.V.
DEMIRA - Current situation of medical care in Libya
Munich, 02/08/2011. The German non-governmental organisation DEMIRA e.V. is in Benghazi assessing the supply situation on the ground in order to organise a further shipment of aid. On the 29th July DEMIRA programme manager Marcia Hamzat accompanied a medical aid delivery which was then distributed from the central medical storage facility to hospitals and clinics in the area. Our DEMIRA staff member was able to gain a first-hand overview of
09-08-2011 | Associations & Organizations
DEMIRA Deutsche Minenräumer e.V.
DEMIRA - Medical Aid Shipment to Benghazi
Munich, 29/07/2011. The longer the NATO operation “Odyssey Dawn” and the international sanctions against the regime of Muammar Gaddafi drag on, the more precarious the humanitarian situation in Libya becomes. In association with the official visit by delegates of the German-African Business Association, led by Parliamentary State Secretary of the German Economics Ministry, Hans-Joachim Otto, DEMIRA's Emergency Response Unit delivered relief supplies to Benghazi. On 27th July 2011, DEMIRA programme manager Marcia
09-01-2011 | Politics, Law & Society
DEMIRA Deutsche Minenräumer e.V.
DEMIRA - 100 Days after the Disaster in Japan
Munich, 18.06.2011. DEMIRA is continuing to provide assistance to the affected people one hundred days after Japan’s triple disaster. On the 11th March an earthquake followed by a Tsunami caused widespread damage in northern Japan. The disaster claimed more than 15,400 lives and a further 8,100 are still missing. It is estimated that as many as 90,000 people are still residing in emergency shelters three months after the disaster. The