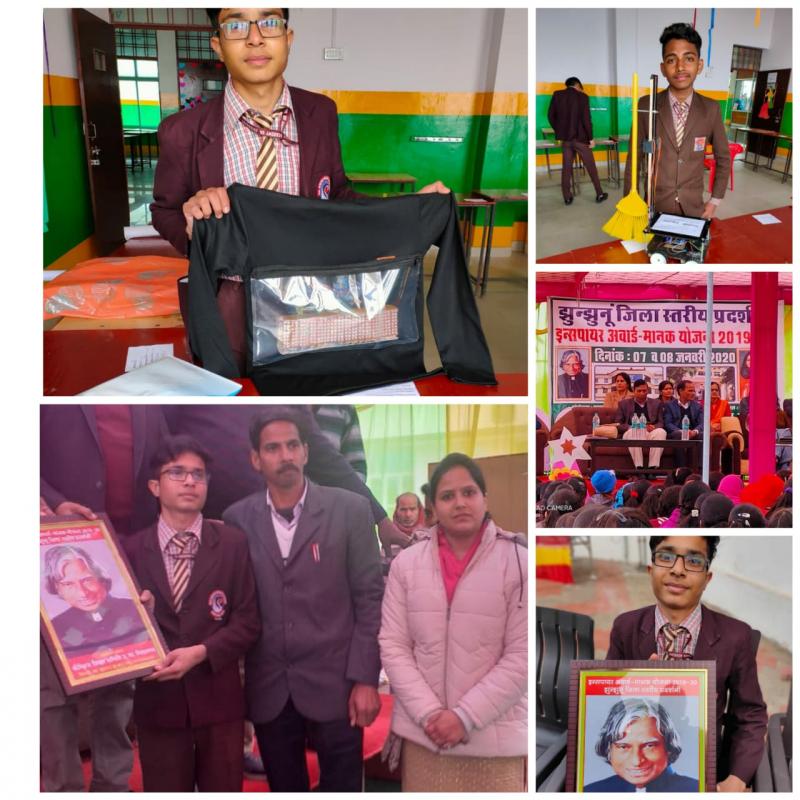 Innovation in Science Pursuit for Inspired Research - INSPIRE scheme is one of the flagship programmes of Department of Science & Technology (DST), Government of India. The INSPIRE Awards - MANAK (Million Minds Augmenting National Aspirations and Knowledge), being executed by DST with National Innovation Foundation – India (NIF), an autonomous body of DST, aims to motivate students in the age group of 10-15 years and studying in classes 6 to 10.

The objective of the scheme is to target one million original ideas / innovations rooted in science and societal applications to foster a culture of creativity and innovative thinking among school children. Smt Jamuna Mishra Academy - JMA established in the year 2004 at Pilani which is considered as Oasis in the desert state of Rajasthan has set a rich tradition of celebrating various days of national as well as international importance on a regular basis.

It is a matter of great pride that alumni of JMA Pilani are presently pursuing higher education in various institutions which include Banasthali Vidyapith which is not only in various QS Rankings but also in Times Higher Education THE World Rankings as one among the best 3 - 4% global universities as well as Second Best Women’s University in the world and Birla Institute of Technology and Science BITS Pilani which is one of the Institutions of Eminence.

JMA Pilani had nominated two students Aryan Soni and Ankit Saini of Class X for the competition and both got short listed for District Level Exhibition and Project Competition (DLEPC) for the award of INR 10,000/- which was received by them through Direct Benefit Transfer DBT scheme. It is to be noted that out of ten lakh ideas nominated, the best 1 lakh only are awarded INR 10,000. Ankit Saini’s electric broom design was appreciated but could not sail to next round.

However, Aryan Soni with his design of digital T Shirt for Deaf and Dumb moved his status upwards to participate in State Level Exhibition & Project Competition (SLEPC) to be held shortly. At this stage, NIF will be providing mentoring support to Aryan Soni for development of prototypes, in coordination with reputed academic and technology institutions of the country. It goes without saying that selection of ideas / innovations are based on novelty, social applicability, environment friendliness, user friendliness and comparative advantage over the existing similar technologies.

After SLEPC, 1,000 best ideas / innovations will be showcased at the National Level Exhibition & Project Competition (NLEPC) out of which top 60 innovations will be shortlisted for national awards and future direction. The top 60 would be considered by NIF for product/process development and their linkage with other schemes of NIF / DST and their display at the Annual Festival of Innovation & Entrepreneurship (FINE). Principal Mrs Booma Natarajan congratulated Aryan Soni for adding glory to his Alma mater JMA Pilani and for taking the road not taken and wished that it would indeed make a difference.

09-13-2018 | IT, New Media & Software
VoxMicro
The AIRETOS E95 Class
The VoxMicro Group is proud to present its AIRETOS® branded E95 Class modules; a reliable, long-lifespan family of wireless adapters that transform the entire Qualcomm-Atheros QCA95xx/AR95xx series of client chipsets into a full portfolio of modular solutions. The E95 Class comprises a total of 14 base models. The AIRETOS® E95 Class supports high-end wireless link configurations that can use a full range of enterprise level protocol features, like CCX and FIPS-loopback
03-21-2016 | Business, Economy, Finances, B …
Take My Online Class
Take My Online Class Offers 100% Guaranteed Class-Help Services
New York, NY March 18, 2016 - America’s best online class help experts not only promise to complete all course related assignments on time, but also help to negotiate the lowest rate possible. Take My Online Class offers academic assistance service through their OCPs or Online Class Provider. “When you hire one of our OCPs for class-help, we hold your payments in escrow until you are happy with the service provided.
01-29-2013 | Science & Education
@WashULaw Washington University School of Law
@WashULaw Welcomes Inaugural Class
The inaugural class of foreign attorneys in Washington University School of Law’s new online Master of Laws (LLM) in U.S. Law Program, @WashULaw, represents seven countries and a variety of professional backgrounds. The 10 attorneys are benefiting from the program’s cutting-edge, web-based format, which allows them to earn their degree from a prestigious world-class research institution without relocating to the United States. The online students hail from Brazil, China, India,
10-04-2010 | Health & Medicine
Gravitational Systems Engineering, inc.
New energy class industrial pump announced
For Immediate Release: 9/20/2010 : GSE announces R-SBP100 Clean energy 100 GPM Traffic powered "Bump Pump" :No Fuel Required US based GSE, Gravitational Systems Engineering, announces a rugged traffic powered pump, which can be easily deployed and requires no fuel. The R-SBP100 is an entry level product designed for use by road construction crews. The 100 GPM capacity and the rugged construction, from recycled tires, make this unit
06-04-2008 | Fashion, Lifestyle, Trends
Drettmann GmbH
Mega: Drettmann reaches the 50 m class
Following its successful launch of the PREMIER 130’ at the beginning of the year, DRETTMANN GmbH has now commissioned the construction of its first 50 meter yacht. Yacht architect and Florida resident JC ESPINOSA will be responsible for the design. The new flagship will be equipped with 2,680 HP Caterpillar motors (optionally, MTU engines are also possible) for maximum speeds of 20 knots. On three decks, a total of ten
01-05-2007 | IT, New Media & Software
WOWGAO INC
The EPC Class Structure
Toronto, ON, July, 2006 - The EPC Tag Class Structure is often misunderstood. 'Class' is not the same as 'Generation'. Class describes a tags basic functionality for example whether it has memory or a battery. Generation refers to a tag specification's major release or ver-sion number. The full name for what is popularly called EPC Generation 2 is actually EPC Class 1 Generation 2, indicating that the specification refers to
Comments about openPR
We publish our press releases on openPR.de because we like people who are "open" - just like us.
Frank Obels, CEO, INCONET - Informationssysteme, Communication und Netzwerkberatung GmbH