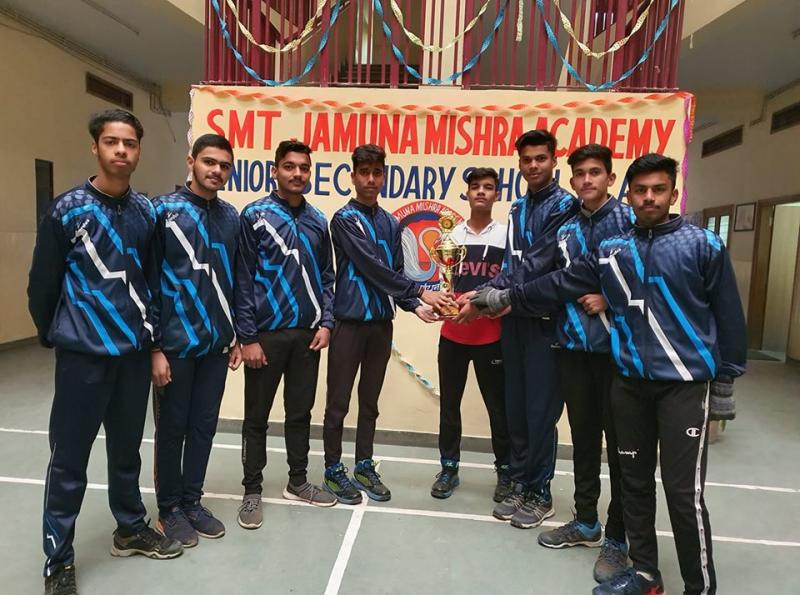 Smt Jamuna Mishra Academy - JMA established in the year 2004 at Pilani which is considered as Oasis in the desert state of Rajasthan has set a rich tradition of celebrating various days of national as well as international importance on a regular basis. It is a matter of great pride that alumni of JMA Pilani are presently pursuing higher education in various institutions which include Banasthali Vidyapith which is not only in various QS Rankings but also in Times Higher Education THE World Rankings as one among the best 3 - 4% global universities as well as Second Best Women’s University in the world and Birla Institute of Technology and Science BITS Pilani which is one of the Institutions of Eminence.JMA Pilani gives importance to sports by celebrating the Founder’s Day every year on August 04 with a spectrum of sports activities. Visionary Founder Dr B M Mishra from Syracuse USA was fond of Basketball and ensured that JMA school had one of the best basketball courts among the educational institutions at Pilani. Jaipur District Council for Sports and Education JDCSE organized on 01 Dec 2019, a district level under 17 basketball tournament at Rakesh Academy Sports complex and the all round performance of JMA boys ensured that they made it to the district level team. JDCSE subsequently organized the RCSE - Rajasthan Council for Sports and Education State Level Cup during 14 – 15 Dec 2019 at Hanujai High School, Kalwar Road Jaipur and the all round performance of JMA boys once again ensured that they made it to the state level team. The Rajasthan Council for Sports and Education – RCSE organized the Indian Council for Sports and Education open Basketball Federation Cup 2019 during 23 – 25 Dec at Lake City Udaipur. The JMA Pilani boys for Rajasthan team played their heart out and ensured that team Maharo Rajasthan won the Federation Cup 2019 with flying colours. JMA Pilani organized a colorful function to felicitate the proud students Tanishq, Sourav, Divyam, Hemant, Abishek, Praveen, Yogesh and Hoppy Manyu. Principal Mrs Booma Natarajan congratulated the Winners for bringing name and fame to their Alma mater and blessed them to achieve more and more in coming times.For more details about JMA Pilani see http://www.jmapilani.org/Default.aspxMrs Booma Natarajan, M.Sc., M.A., B.Ed. Principal, Jamuna Mishra Academy – JMA Near Old Pilani Post Office Pilani Rajasthan 333031 India Phone 91-1596-242314 Email booma_pilani at yahoo.co.in Website: http://www.jmapilani.org/Default.aspx FaceBook: https://www.facebook.com/JMAPilaniRajasthanRank1/About JMA Pilani: Jamuna Mishra Academy - JMA Pilani is a Co-educational English Medium School with Experienced Teachers, Spacious Classrooms and Modern Amenities designed to impart Quality Education combined with All Round Personality Development and lay the Best Foundation for the Child’s Future. While the school admits both boys and girls, the girl student enrollment has been steadily rising every year and is presently nearly 50% of the total strength. Right from its inception, JMA Pilani has embarked on a rich tradition of celebrating various days of national and international significance and festivals which makes it a cut above the rest schools in Pilani. The school has for boys and girls Scout and NCC, girls’ band which has been winning laurels every year. NCC cadets of JMA Pilani have also been selected for participation in Republic Day Camp RDC and Shivaji Trail Trek. Yoga, Karate, Painting and Music are not just part of school routine but a way of life for the students. It is a matter of great pride that JMA Pilani is referred popularly as the School with 100% Results on account of outstanding results year after year in Board of Secondary Education Rajasthan RBSE Class X and Class 12.

03-14-2018 | Associations & Organizations
Transparency Market Research
AR in Education Market -
Augmented reality or virtual reality is facilitating the growth of computing power. This technology can integrate new and trending algorithms of Big Data, Artificial intelligence, and wearable devices, among others. Conglomeration of augmented reality with virtual reality is expected to drive the growth of next generation computing and work as an instinctive edge for Internet of Things (IoT). The adoption of AR in education is likely to gain momentum due
06-21-2017 | Media & Telecommunications
Market and research
Global Private Tutoring Market 2017 Ambow Education, New Oriental, TAL Education …
The Private Tutoring Market 2017 inspects the execution of the Private Tutoring advertise, encasing a top to bottom judgment of the Private Tutoring showcase state and the aggressive scene comprehensively. This report breaks down the capability of Private Tutoring market in the present and in addition the future prospects from different points in detail. The Global Private Tutoring Market 2017 report incorporates Private Tutoring industry volume, piece of the overall
02-08-2012 | Science & Education
Gower Publishing Ltd
Design Education
Design Education encapsulates and analyses the research findings facilitated by the UK based Centre for Excellence in Teaching and Learning through Design. By examining over 40 projects, ranging in focus from design students' use of archives and museum collections to the potential of specific technologies to enhance teaching and learning, Design Education explores aspects of learning and teaching in higher education design subjects, from architecture and 3D design through to
12-24-2011 | Science & Education
Shruti Foundation
World Education - Arts, Sciences and Education Culture
About the WE-ASC Congress The World Education Culture Congress, WE-ASC 2011 adopts a two-pronged approach: 1. To influence the evolving culture of education and educational pedagogy, with the objective of deep systemic change. 2. To examine representation and application of cultural/traditional knowledge and their dissemination in education systems with a view to developing practical solutions and formats for training, application, sustainable development and human empowerment. The current system of education, adopted under colonial rule
03-08-2011 | Science & Education
Cengage Education (Australia)
Cengage Education (Australia)
Cengage Education is a leading Australian distance education provider. Its courses are designed to improve student learning outcomes and engagement. Instructors are also provided with the right teaching tools to maximise student potential. In the educational industry today, a different set of dynamics is placing a gap between administrators, students and instructors. Even as budgets are cut, administrators are expecting instructors to improve learning outcomes. Students are increasingly holding instructors
01-11-2011 | Science & Education
kgsepg
Education And Knowledge Simplified.
When an entrepreneur and a tech-geek come together, it results in ideas never explored before. Deepanker Agarwal, an entrepreneur cum management student form IMT (Ghaziabad) and Gorav Singal, a computer wizard from Amity University (Noida), started sharing their learning of management and computers online. Soon there were feed backs and many people started to share various projects and presentations on the same platform. There were more than 12,000 uploads across
Comments about openPR
9 o'clock: discuss press release with client, 10 o'clock: submit release to openPR, within the briefest possible time release is published and displayed in a prominent place on openPR.de. I am thrilled!
Zehra Spindler, Calypso Now! - Communication Agency