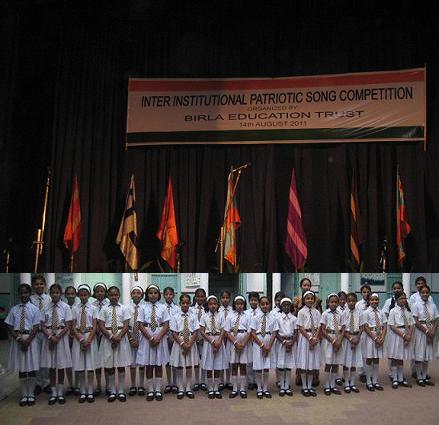 To quote Colin Powell “The healthiest competition occurs when average considered people win by putting above average effort”Located in the heart of Shekhawati region of Rajasthan, Pilani is well known for various educational institutions, CSIR Laboratory CEERI as well as the upcoming BrahMos Missile Assembly Project unit. Established in the year 2004, Jamuna Mishra Academy - JMA which has been making rapid strides in early childhood education is presently one among the top ranking and most sought after schools at Pilani Rajasthan. The school which started with an enrollment of 60 students for the Nursery, LKG, First Junior and Class1 has grown today till Class VIII with well over 8 times the enrollment. The teacher strength at JMA also has grown from 5 in 2004 to 23 presently. A noteworthy fact is that the girl student enrollment has been steadily rising every year in JMA and is presently close to 50% of total strength which itself is a matter of pride in a state which had alarmingly low record of girl’s education. For the past very many years, every year at Pilani, the Birla Education Trust (BET) conducts an Inter Institutional Patriotic Song competition close to the Independence Day. For the year 2011, the same was held on August 14th at the imposing Vijay Hall of Birla Public School, Pilani. The prominent among the participating schools included the well known Pilani schools Birla School, Birla Public School (BPS), Birla Balika Vidyapeeth (BBVP) well known for the NCC Band parade in Republic Day celebrations at Raj Path for last over five decades, Birla Shishu Vihar, Hari Devi Jhutharam Shishu Sadan (HJSS), Bal Niketan Senior Secondary School, B.S. Saboo Senior Secondary School, Birla Sanskrit College and Jamuna Mishra Academy. This is the first time JMA children have participated in this song competition. (Retd) Col VN Ratnakar Director BET in his welcome address introduced Chief Guest Dr Chandra Shekhar Director of the CSIR Laboratory CEERI (Central Electronics Engineering Research Institute) Pilani as a modern saint scientist dedicated to bring cutting edge technologies to common man’s reach. After the lighting of the ceremonial lamp, the competition took off in which each school team contested with enthusiasm. Appreciating the splendid performance by the various teams, Dr Chandra Sekhar in his speech emphasized on the sense of belonging and pride among the citizens of India today which is the essence of patriotism for achieving success in all endeavors. The participating schools were classified into two categories – Boarding and Day Schools. In the Boarding School category, BPS, BBVP and Birla School bagged the first, second and third prize respectively. In the day schools category, Birla Shishu Vihar, HJSS and first time participant Jamuna Mishra Academy bagged the first, second and third prize respectively.The JMA Pilani children who had come for the song competition along with their Principal Mrs Booma Natarajan and the team of teachers left the Vijay Hall with beaming faces and pride that they were part of an institution which is a jewel in the crown among the schools at Pilani.For more details about JMA Pilani see http://www.jma-pilani.page.tl/About JMA Pilani: Smt Jamuna Mishra Academy - JMA Pilani is a Co-educational English Medium School with Experienced Teachers, Spacious Classrooms and Modern Amenities Designed to impart Quality Education combined with All Round Personality Development and lay the Best Foundation for the Child's Future. For more details about JMA Pilani see http://www.jma-pilani.page.tl/Mrs Booma Natarajan MSc (Chemistry), MA (Childcare & Education), B.Ed Principal Jamuna Mishra Academy – JMA Atma Ram Padia Marg Pilani Rajasthan 333031 India Phone 91-1596-242314 Email booma_pilani at yahoo.co.in Website http://www.jma-pilani.page.tl/

01-12-2021 | Science & Education
Lakshya International School
International School in Kakinada | Lakshya School
If you are searching for best school to give a right future for your child then visit Lakshya International School in Kakinada which is having both International Primary Curriculum and CBSE Curriculum Lakshya, is a highly progressive and enterprising international school committed to provide quality education with great emphasis on traditional values. This progressive thinking has led to progressive teaching methods and has brought about a tremendous change in how our
02-21-2020 | Industry, Real Estate & Constr …
ReportsnReports
School Bus Market
A Discount (20%) can be asked before order a copy of School Bus Market Report at https://www.reportsnreports.com/contacts/discount.aspx?name=2939701 The research study on Global School Bus Market organizes the overall perspective of the industry. This incorporates upcoming flow of the School Bus Market together with an extensive analysis of recent industry statistics. It describes the School Bus market size as well as factors controlling market growth. Likewise, the report explains various challenges
08-08-2018 | Advertising, Media Consulting, …
IDIGITALS
School In Vapi - Laxmi Vidyapeeth School Vapi
Choosing a right school for your child is the first step towards their education. A school which teaches important social lessons of life to children is important in this age. Not just for education, a school also helps in the interaction between students of different social and financial background. Nowadays, with the options available it is really very bewildering for parents to choose the best. Good results are not the only
05-15-2017 | Science & Education
EduHappy
EduHappy School Management Software
Nowadays, schools; whether K-12, preschools, Primary, Elementary, High Schools, or even the universities and colleges are having an increasing demand to streamline the learning process while managing the school enterprise resources in an optimum way. School Management Software in our point of view has to integrate three major systems in order to provide the school what it needs from building the school infrastructure in the system to administer the whole school
08-12-2016 | Science & Education
EdProcure
The school procurement process
Schools, like all public sector bodies and larger private sector organisations, conduct their procurement according to budgets. These budgets are set at the top of the organisation’s tree and filtered down to the budget holders who have been given the responsibility to spend this money. Spend being the operative word. School procurement is a little bit like a communist society – spend it or lose it.
09-19-2011 | Science & Education
Gonarezhou Transfrontier Park
School opening ceremony
The development of a new elementary school in Mavue was officially completed on August 11th, 2011. A community meeting was organized in light of this occasion, which had the representatives of the Gonarezhou Transfrontier Park meet with the village chief, representatives of the Gaza Province, representatives of the political party Frelimo, representatives of the border police and local residents. Local residents were very excited seeing the new school and are convinced that
Comments about openPR
I can't but agree to the positive statements about your portal: easy to use, clear layout, very good search function, and quick editing!
Jens O'Brien, Borgmeier Media Communication