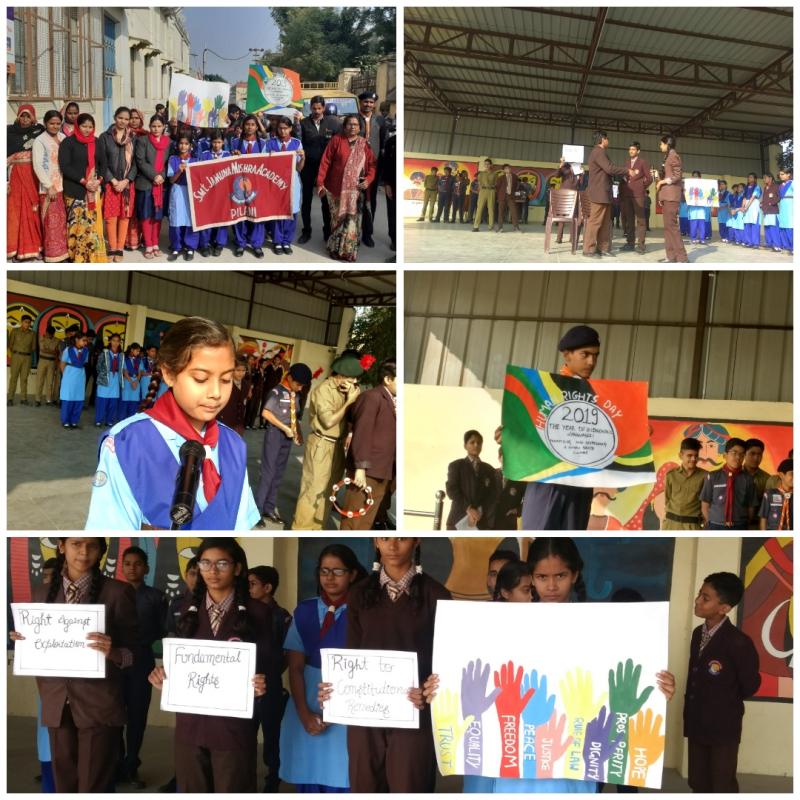 Human rights are our fundamental rights or freedoms. They include our right to live, our right to health, education, freedom of speech and thoughts, and our equal rights. Human rights are legal entitlements to people for the simple reason that they are human. These rights have been variously described as fundamental, inalienable, basic and even God-given. Human Rights undoubtedly belong to each and every one and binds everyone together as a global community with the same ideals and values. Recognition of human rights indeed aims at preserving dignity and upholding equality of all people before the law. Human Rights Day is observed every year on 10 December which happens to be the day the UN United Nations General Assembly adopted, in 1948, the Universal Declaration of Human Rights ( UDHR ): a milestone document proclaiming the inalienable rights which everyone is inherently entitled to as a human being regardless of race, colour, religion, sex, language, political or other opinion, national or social origin, property, birth or other status. Available in more than 500 languages, it is said to be the most translated document in the world.Smt Jamuna Mishra Academy JMA established in the year 2004 at Pilani which is considered as Oasis in the desert state of Rajasthan has established a rich tradition of celebrating various days of national as well as international importance on a regular basis. It is a matter of great pride that alumni of JMA Pilani are presently pursuing higher education in various institutions which include Banasthali Vidyapith which is not only in various QS Rankings but also in Times Higher Education THE World Rankings as one among the best 3 - 4% global universities as well as Second Best Women’s University in the world and Birla Institute of Technology and Science BITS Pilani which is one of the Institutions of Eminence.On 10 Dec 2019, Human Rights Day with theme “Youth Standing Up for Human Rights”, JMA Pilani Class 8 students Divyanshi, Diya,Pratishtha Aakansha, Pulkit, Harshita,Vansh and Aditya enacted a play to demonstrate various rights. 4 students from class 7th, Saksham , Keshav, Rinku, and Nupur gave talks on various topics related to Human Rights. Students of class VII, VIII, scouts, guides and staff of JMA took a rally across Pilani town to mark the day. Principal Mrs Booma Natarajan reiterated that doing one's fundamental duty is as equal as one's fundamental rights and participation of empowered youth who can play a crucial role in positive change is essential to achieve sustainable development for all.For more details about JMA Pilani see http://www.jmapilani.org/Default.aspxMrs Booma Natarajan, M.Sc., M.A., B.Ed. Principal, Jamuna Mishra Academy – JMA Near Old Pilani Post Office Pilani Rajasthan 333031 India Phone 91-1596-242314 Email booma_pilani at yahoo.co.in Website: http://www.jmapilani.org/Default.aspx FaceBook: https://www.facebook.com/JMAPilaniRajasthanRank1/About JMA Pilani: Jamuna Mishra Academy - JMA Pilani is a Co-educational English Medium School with Experienced Teachers, Spacious Classrooms and Modern Amenities designed to impart Quality Education combined with All Round Personality Development and lay the Best Foundation for the Child’s Future. While the school admits both boys and girls, the girl student enrollment has been steadily rising every year and is presently nearly 50% of the total strength. Right from its inception, JMA Pilani has embarked on a rich tradition of celebrating various days of national and international significance and festivals which makes it a cut above the rest schools in Pilani. The school has for boys and girls Scout and NCC, girls’ band which has been winning laurels every year. NCC cadets of JMA Pilani have also been selected for participation in Republic Day Camp RDC and Shivaji Trail Trek. Yoga, Karate, Painting and Music are not just part of school routine but a way of life for the students. It is a matter of great pride that JMA Pilani is referred popularly as the School with 100% Results on account of outstanding results year after year in Board of Secondary Education Rajasthan RBSE Class X and Class 12.