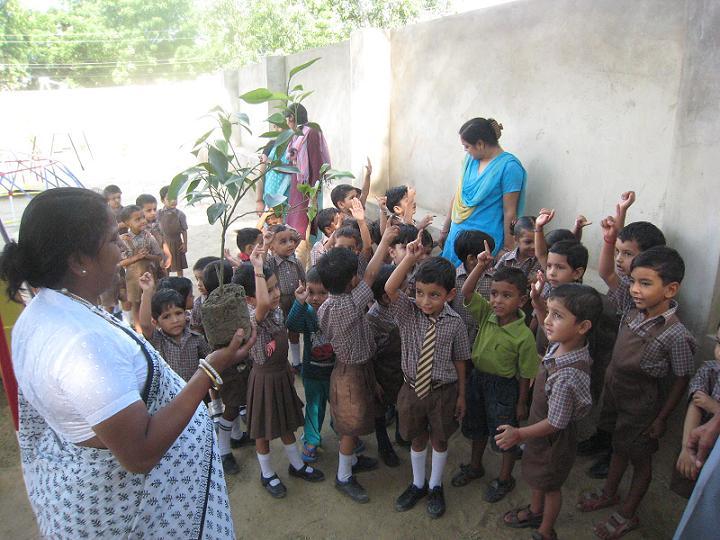 The importance of trees in purifying the air, as natural resources, maintaining the ecological balance, preventing soil erosion, as medicines, habitats for faunal species, providing nutrients to the soil etc need not be over emphasized. The first ever national awakening to the necessity of planting trees and attempts at tree rehabilitation in India came in July 1947, with a successful tree plantation drive in Delhi. With Southwest monsoon embracing the length and breadth of the country, July is indeed the time just right for any kind of plantation activity or seed dispersal. While in India today, Van Mahotsav is celebrated with wide publicity by Governmental Institutions and NGOs, the celebrations at schools involving children always have a special significance for obvious reasons.Felix Finkbeiner a Munich International school boy at Starnberg in Germany triggered the tree plantation passion in January 2007 which has snowballed into a green student movement in over 70 countries across the globe.Located in the heart of Shekhawati region of Rajasthan, Pilani is well known for various educational institutions, CSIR Laboratory CEERI as well as the upcoming BrahMos Missile Assembly Project unit. Established in the year 2004, Jamuna Mishra Academy - JMA which has been making rapid strides in early childhood education is presently one among the top ranking and most sought after schools at Pilani Rajasthan. The school which started with an enrollment of 60 students for the Nursery, LKG, First Junior and Class1 has grown today till Class VIII with well over 8 times the enrollment. The teacher strength at JMA also has grown from 5 in 2004 to 23 presently. A noteworthy fact is that the girl student enrollment has been steadily rising every year in JMA and is presently close to 50% of total strength which itself is a matter of pride in a state which had alarmingly low record of girl’s education. JMA Pilani celebrated Van Mahotsav on July 27, 2011 to create awareness among students and the public about conservation of nature and spread the message to love and care for nature as well as to live in harmony with nature. On this occasion, JMA Principal Mrs Booma Natarajan and the team of teachers organized the celebrations in which students of the school participated enthusiastically and planted saplings with a promise to protect them.Its high time every conscious citizen irrespective of his nationality takes a pledge to leave a legacy of a green earth to our future generations. For more details about JMA Pilani see http://www.jma-pilani.page.tl/About JMA Pilani: Smt Jamuna Mishra Academy - JMA Pilani is a Co-educational English Medium School with Experienced Teachers, Spacious Classrooms and Modern Amenities Designed to impart Quality Education combined with All Round Personality Development and lay the Best Foundation for the Child's Future. For more details about JMA Pilani see http://www.jma-pilani.page.tl/Mrs Booma Natarajan MSc (Chemistry), MA (Childcare & Education), B.Ed Principal Jamuna Mishra Academy – JMA Atma Ram Padia Marg Pilani Rajasthan 333031 India Phone 91-1596-242314 Email booma_pilani at yahoo.co.in Website www.jma-pilani.page.tl/