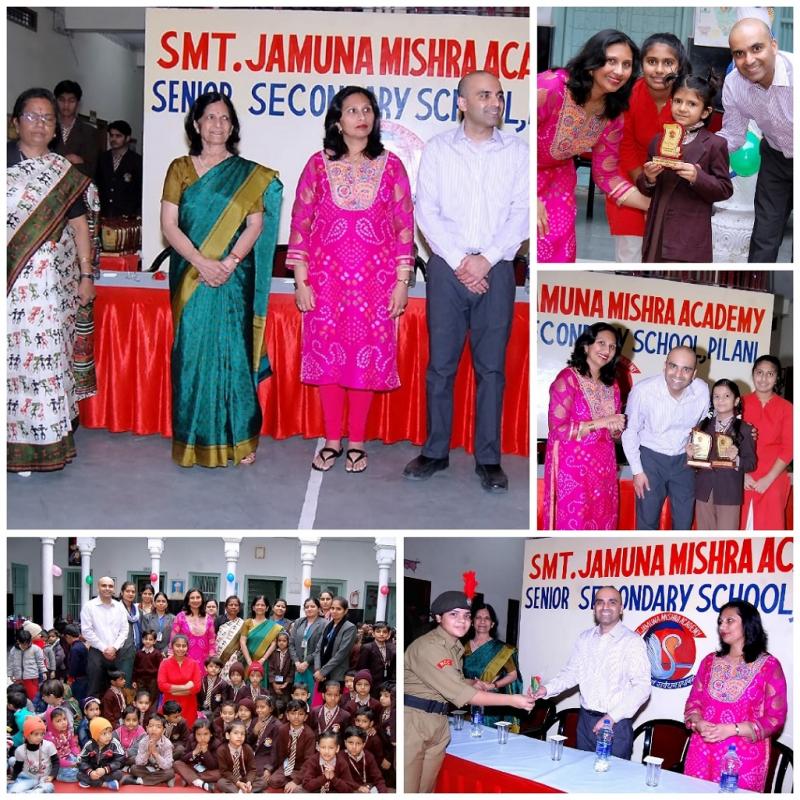 Smt Jamuna Mishra Academy – JMA was established in the year 2004 at Pilani in Shekawati which is considered as Oasis in the desert state of Rajasthan. Matter of Pride that alumni of JMA Pilani are presently pursuing higher education in various institutions which include Birla Institute of Technology and Science BITS Pilani which is one of the Institutions of Eminence and Banasthali Vidyapith which is not only in various QS Rankings but also in Times Higher Education THE World Rankings as one among the best 3 - 4% global universities as well as Second Best Women’s University in the world.

Popularly known as school in Pilani with 100% results in Board Examinations year after year, JMA apart from observing days of national and international significance conducts a whole lot of events and competitions round the year which include both in Hindi and English Debate, Poem Recitation and Essay Writing; poster making, rakhi making, mehandi, rangoli etc. On 26 Nov 2019 which also happens to be the National Law Day – Constitution of India, JMA Pilani organized a grand function to award the prizes.

210 prizes were given to students from classes Nursery to Class 12. For pre primary kids there were 9 first prizes, 11 second prizes and 11 third prizes. There was a thunderous round of applause for first prize winners for firing Cadet Harshita Swami, for drill Cadet Devkaran and for cultural activities Cadet Aryan Bhargav and second prize winner for drawing Cadet Priya for adding glory to the school name during NCC camp 10 – 19 Oct 2019 held at Piramal School Bagad Rajasthan.

JMA Management Committee President Dr Suman Mishra, members Dr Gautam Mishra and Mrs Mridula Mishra along with Ms Anjali Mishra who is studying in USA graced the occasion and gave away the prizes. Principal Mrs Booma Natarajan welcomed the gathering and steered the proceedings. When the prize distribution function concluded, the students who won prizes hugging their prizes and beaming faces and pride said that they were indeed part of an institution which is a shining jewel in the crown among the schools at Pilani.

03-22-2021 | IT, New Media & Software
DigitalAkki Inc.
Ankit Mishra Shares How his company helping small & Medium Business
Ankit Mishra, Founder Of i-Kart Pvt. Ltd. and DigitalAkki Inc. one of the leading IT, eCommerce, and Automation Company in India. Currently, Ankit Mishra and company is working with startups and small businesses in India, the US, and the UK and providing IT and technology support, so that every business can grow smoothly without spending much budget on their marketing and technology part. Here is how Ankit Mishra is Helping Small
03-22-2019 | Science & Education
PR 2019
Rishihood University appoints Kamlesh Mishra as is it new VC
Rishihood University appoints Kamlesh Mishra as is it new VC New Delhi: Kamlesh Misra joined Rishihood University as vice chancellor. The university is set up by an IIT graduate and philanthropists to focus on social impact in the areas like healthcare, entrepreneurship, education and creativity. The campus is in Sonipat, the upcoming education hub of Delhi NCR. Mr Kamlesh Misra was earlier the vice chancellor of Auro University in Surat and Ansal
12-29-2017 | Sports
Chanakya IAS Academy
Hazaribagh Youth Outshone at AK Mishra Foundation’s State Cross Country Champi …
The sound of cheerful motivation filled the air for participants, right after the red flag waved kicking off the State Cross Country Championship at Hazaribagh. The event was organized by AK Mishra Foundation in association with Hazaribagh Athletic Association at New Stadium, Hazaribagh on December 27th 2017. With 18 districts and over 500 participants, Hazaribagh youth marked glory for the district followed by participants from Ramgarh as runner-up winners. While
05-18-2017 | Science & Education
JMA Pilani Rajasthan
Jamuna Mishra Academy - JMA Top Ranking among Pilani Best Schools in India today
JMA which has been making rapid strides in early childhood education derives its inspiration from the quote “Information is just bits of data while knowledge is putting them together and wisdom is transcending them.” Matter of pride that in Board of Secondary Education Rajasthan RBSE 2017 Class XII, the very second Batch of Jamuna Mishra Academy - JMA Pilani has secured 100% Result among the schools of Pilani. Total Students: 18
09-19-2011 | Science & Education
JMA Pilani Rajasthan
Celebrations Galore at Jamuna Mishra Academy - JMA Pilani Rajasthan
Located in the heart of Shekhawati region of Rajasthan, Pilani is well known in India today for various top ranking educational institutions, CSIR Laboratory CEERI as well as the upcoming BrahMos Missile Assembly Project unit. Jamuna Mishra Academy – JMA established in the year 2004 which has been making rapid strides in early childhood education is presently one among the top ranking and most sought after schools at Pilani Rajasthan. JMA
08-18-2011 | Science & Education
JMA Pilani Rajasthan
Pilani Rajasthan Jamuna Mishra Academy - JMA Celebrates Grandparents Day
The grandparents may have silvery hair but their hearts always have been golden. One can say that a little bit of parent, a little bit of teacher, a little bit of best friend all rolled into one is the grandparent. It is essential that this generation of children in India today realize that Grandparents are indeed our heritage as well as essential members of our families and communities. Every child has
Comments about openPR
We publish our press releases on openPR.de because we like people who are "open" - just like us.
Frank Obels, CEO, INCONET - Informationssysteme, Communication und Netzwerkberatung GmbH