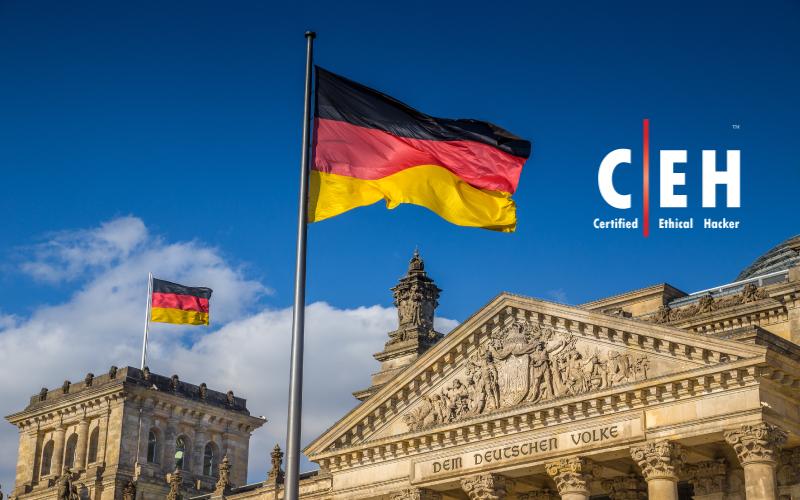 Over 220,000 cybersecurity professionals have been trained in EC-Council programs since we embarked on our mission to help improve the global levels of cybersecurity talent. Starting this month, thousands more will get trained in the newly launched German version of the globally recognized Certified Ethical Hacker (C|EH) Exam.“Ethical hacking is a fundamental requirement of every organization or government entity. With the exam now in German, residents of German-speaking nations will have the opportunity to prove to employers around the world that they have what it takes to become a Certified Ethical Hacker” – Philip Blake, European Director of EC-Council.Germany, one of the world’s strongest economies and leading member of the European Union, has been badly hit in recent years by cyber attacks. It is estimated that cybercrimes have cost German manufacturers some €43 billion. SME’s, which are the backbone of Germany’s economy, are the most vulnerable to threats as reported by German IT industry body Bitcom. In response to cybercrime, the German government has started ramping up its offensive capabilities in cybersecurity to thwart such attacks. Entities such as the Federal Office of Information Technology Security (BSI), The National Center for Cyber Defense, Federal Office of Civil Protection and Disaster Assistance have been formed to strengthen and raise the cybersecurity standards of the nation.Getting through EC-Council’s C|EH program means that candidates would have mastered skills in an accredited ethical hacking methodology that is widely used by industry professionals in most demanding penetration testing or ethical hacking scenarios.This new German version joins EC-Council’s other released Japanese version that was an instant hit in Japan. The firm plans to roll out more language versions of its portfolio programs shortly to embrace an even wider community. Jens Gilges, one of EC-Council’s German CEI’s, endorsed this new exam ‘I had the chance to test the German version of the Certified Ethical Hacker exam. Being around IT Certification tests for now almost 20 years, I was always afraid to take the exam in languages other than English because of bad translation. The German CEH exam was very well translated and very nice to read. The questions were very straight and clear. I would recommend this test to anybody who wants to take a German exam and enhance their IT Security career.’EC-Council 101C Sun Ave NE Albuquerque, NM 87109About EC-Council:EC-Council has been the world’s leading information security certification body since the launch of its flagship program, Certified Ethical Hacker (C|EH), which created the ethical hacking industry in 2002. Since the launch of C|EH, EC-Council has added industry-leading programs to their portfolio to cover all aspects of information security including EC-Council Certified Security Analyst (ECSA), Computer Hacking Forensics Investigator (C|HFI), Certified Chief Information Security Officer (C|CISO), among others.EC-Council Foundation, the non-profit branch of EC-Council, created Global CyberLympics, the world’s first global hacking competition. EC-Council Foundation also hosts a suite of conferences across the US and around the world, including Hacker Halted, Global CISO Forum, TakeDownCon, and CISO Summit.To learn more about EC-Council, visit https://www.eccouncil.org/

You can edit or delete your press release C|EH, now in German – EC-Council removes Language Barrier in Cybersecurity Credentialing here

02-24-2020 | IT, New Media & Software
EC-Council
EC-Council conducts a sold-out CISO Wargames simulation with Top Cybersecurity E …
Summary: EC-Council, leading global information security certification body, conducted a head-to-head simulated cyber wargame among top cybersecurity executives in Tampa, Florida. Tampa, Florida, February 6, 2020 - The sold-out session, "CISO wargame," had 27 senior executives from the largest managed IT service providers in the United States. They collaborated for a simulated incident where an organization is hit by a ransomware attack. Role-playing as c-suite executives, participants had to endure a
08-22-2019 | Science & Education
EC-Council
The Hong Kong Institute of Technology partner with EC-Council to address the cyb …
EC-Council and Hong Kong Institute of Technology partnered to create cybersecurity education opportunities and bring awareness about the significance of certified programs. Technological innovations drive the development of the education industry. The future education industry in Hongkong is expected to witness a rise of opportunities along with growing challenges. Hong Kong is rising from the traditional learning environment to a more global online environment to create, transmit, and apply knowledge in
05-31-2019 | IT, New Media & Software
EC-Council
CREST and EC-Council Announce Certification Equivalency for Penetration Testers
Leading cyber security certification bodies CREST and EC-Council have announced mutual equivalency for their professional entry-point technical qualifications. This significant initiative reflects the need to create an industry framework for equivalent technical cyber security qualifications measured against the same criteria to replicate the approach in other professions. The announcement helps to address the confusion around qualifications, providing clear development credentialed pathways and access to professional careers.
11-27-2018 | Science & Education
EC-Council
EC-Council and RSA Security announce partnership
EC-Council and RSA Security have teamed upto offer EC-Council certification and training programs to RSA Security’s vast range of clients, partners and employees. EC-Council and RSA Security LLC (“RSA”) have partnered to offer information security skills-based training to professionals globally. The deal was constructed to allow RSA to offer EC-Council courses to the RSA clients and partners to address the widening gap between the skills required by corporations to fend off